"Love's Labour's Lost is one of William Shakespeare's early comedies, believed to have been written in the mid-1590s for a performance at the Inns of Court before Queen Elizabeth I. It follows the King of Navarre and his three companions as they attempt to swear off the company of women for three years in order to focus on study and fasting. Their subsequent infatuation with the Princess of France and her ladies makes them forsworn. In an untraditional ending for a comedy, the play closes with the death of the Princess's father, and all weddings are delayed for a year. The play draws on themes of masculine love and desire, reckoning and rationalization, and reality versus fantasy." 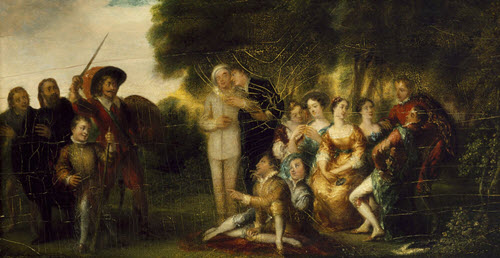