"Romeo and Juliet is a tragedy written by William Shakespeare early in his career about two young star-crossed lovers whose deaths ultimately reconcile their feuding families. It was among Shakespeare's most popular plays during his lifetime and along with Hamlet, is one of his most frequently performed plays. Today, the title characters are regarded as archetypal young lovers."

William Shakespeare's Romeo and Juliet (Baz Luhmann film)
"Baz Luhrmann, one of today's most innovative filmmakers, takes a completely fresh and intriguing look at a beloved story with William Shakespeare's Romeo and Juliet. Luhrmann and his team have created a dazzling, powerful, iconoclastic world full of fantastic elements to underscore and reveal the tale of the two famous, star-crossed lovers. The film gives Shakespeare's Elizabethan English a contemporary American voice, set in the mythical city of Verona Beach, a passionate, visceral, sexy, violent other-world, neither future nor past." 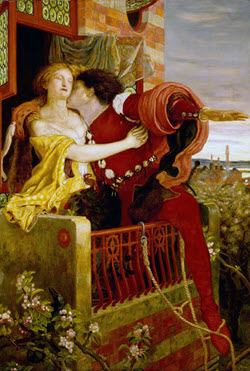