A Leaf Blown on the Winds of History: China's Last Emperor, Part One
"Groomed for power by the Dowager Empress, three-year-old Aisin-Gioro Puyi ascended China’s imperial throne in 1908. This program illustrates the early years of his sporadic reign, his education under Scottish tutor Reginald Johnston, and the shifting of his political fortunes at the mercy of international events. Puyi’s eviction from the Forbidden City during his teenage years, his Westernized playboy lifestyle, and his manifold marriages and liaisons all come to life through rarely seen archival footage, eyewitness interviews, and Puyi’s own writings. The episode concludes at the height of the Japanese occupation, during which Puyi lost all semblance of authority and became a puppet ruler."

Long Journey into a Red Sunset: China's Last Emperor, Part Two
"August 16, 1945: the end of World War II and the capture of Aisin-Gioro Puyi, Manchukuo’s Japanese-controlled regent, by the Soviet Army. This program depicts what befell the former Chinese emperor during his captivity in Russia, his eventual extradition to Communist China, and his troubled life under Mao’s regime. Through archival footage, detailed interviews, and excerpts from Puyi’s autobiography, the film explores his testimony at an International Military Tribunal, his nine-year detention at a reeducation camp, his eventual pardon by China’s Supreme Court, and his return to a quiet life in Beijing—darkened once more by the Cultural Revolution."

Madame Chiang Kai-Shek
"In a remarkable life that touched three centuries, Madame Chiang Kai-Shek rose to become one of the most powerful women in the world. She positioned herself at the forefront of Chinese politics and held extraordinary influence in world affairs for a woman of her time. She was, for 5 decades, a source of invaluable support for her China's ineffective Nationalist leader, her husband, General Chiang Kai-Shek...."

Mao Tse Tung: China's Peasant Emperor
"This program--told through the accounts of those who have met and studied him, loved and loathed him--includes archive film and pictures going back to the very earliest days of Mao's life as well as unique film of China at the turn of the century." 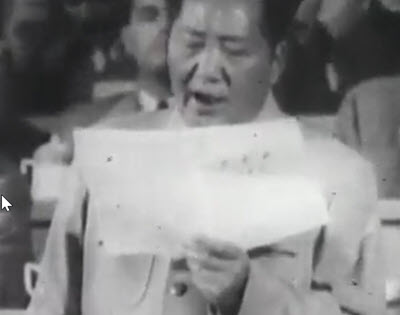