In The Intense Now
"Made following the discovery of amateur footage shot in China in 1966 during the first and most radical stage of the Cultural Revolution, this film ,  speaks to the fleeting nature of moments of great intensity. Scenes of China are set alongside archival images of the events of 1968 in France, Czechoslovakia, and, to a lesser extent, Brazil. In keeping with the tradition of the film-essay, they serve to investigate how the people who took part in those events continued onward after passions had cooled. The footage, all of it archival, not only reveals the state of mind of those filmed--joy, enchantment, fear, disappointment, dismay--but also sheds light on the relationship between a document and its political context. What can one say of Paris, Prague, Rio de Janeiro, or Beijing by looking at the images of the period? Why did each of these cities produce a specific sort of record?...."

Morning Sun
"(This film) attempts, in the space of two hours, to create an inner history of the Great Proletarian Cultural Revolution (c.1964-1976). It provides a multi-perspective view of a tumultuous period as seen through the eyes - and reflected in the hearts and minds - of members of the high-school generation that was born around the time of the founding of the People's Republic of China in 1949, and that came of age in the 1960s..." (Kanopy)

The Unfortunate Generation: The Cultural Revolution and Beyond
"Within two years of the Cultural Revolution, armed factions battled each other in Mao’s name. To avoid civil war, Mao essentially banished his zealots to the countryside. This program chronicles the Cultural Revolution, its disastrous aftermath, and the role of Mao’s wife, Jiang Qing. Scholars, diplomats, and survivors discuss the forced labor camps known as 'Schools of May 7th'; the attacks on foreign consulates in Hong Kong and Beijing; China’s support of Cambodia’s Khmer Rouge; and the trial of the 'Gang of Four.'" 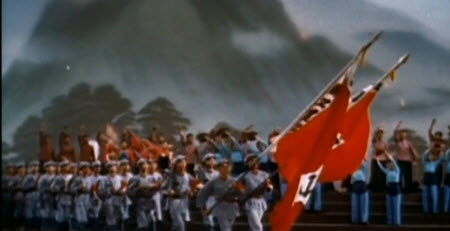