Ancient China
"From the creation legend of Panku to the demise of the Han Dynasty, this program traces Chinese history and explores the roots of Chinese culture today. Visit the Great Wall of China as scholars discuss why it remains even today a symbol of oppression, exemplified in the legend of the weeping woman; the Imperial Palace and how it exemplifies Chinese beliefs in harmony; and the Beijing Opera, whose works are an elaborate retelling of traditional folktales. The influences of Buddhism, ancestor worship, and Taoism in China are also discussed, along with stunning footage of the Buddhist caves and the terra-cotta army."

Ancient China: Agriculture
"See how the Chinese developed the roots of modern agriculture."

Born Under a Red Flag 1976-1997
"...follows the country’s new leadership of Deng Xiaoping and its unlikely transformation into an extraordinary hybrid of communist-centralized politics with an ever-expanding free market economy. "

China 2000 BC: The Rise and Fall of Dynasties in Ancient China
"This program explores how the idea of Zhong-hua (Sinocentrism) was forged in ancient China and finally utilized by the First Emperor of Qin to bind many people under one flag."

China 2000 BC: Unearthing the Truth Behind a Myth, the Xia Dynasty
"China's earliest dynasty was the Shang that was founded in about 1600 B.C. However joint research by Chinese and Japanese archaeologists is uncovering evidence of an even earlier dynasty...it was the Xia, the first dynasty established by Yu the Great, who is said to have saved many people's life from violent floods through his diligent flood prevention works. This episode explores how the first chaos was followed by a dramatic development of the first dynasty,"

China in Revolution
"...charts the country's most violent era where decades of civil war and foreign invasions led to the bloody battle for power between Mao Zedong and Chiang Kai-shek. "

China: The Roots of Madness, 1967
"This historical film examines China’s political history, including Mao Tse-tung, the Boxer Rebellion, and the Nationalist-Communist victory. "

China's Boxer Rebellion
"...In 1997, Britain ceded control of Hong Kong to China completing the Boxer Rebellion's goal of nearly 100 years prior--to oust outsiders. This movement led to the massacre of thousands of foreigners and international intervention in 1900."

The Immortal Emperor
"Amazing footage of the dig to excavate the 2000-year-old tomb of Qin Shihuang, China's First Emperor. The famous terracotta army was only part of a spectacular find: the Imperial kitchen, the orchestral office, chariots and charioteers were all included to ease his journey to the afterlife."

Mao Tse Tung: China's Peasant Emperor
"This program--told through the accounts of those who have met and studied him, loved and loathed him--includes archive film and pictures going back to the very earliest days of Mao's life as well as unique film of China at the turn of the century."

The Mao Years 1949-1976
"...examines the turbulent era of Mao's attempts to forge a 'new China' from the war-ravaged and poverty-stricken nation."

Mao's Great Famine
"Between 1958 and 1962, China lived through tragedy on an epic scale. 'The Great Leap Forward'– conceived by Mao so that China could drive industrial output ahead of Great Britain and achieve autonomy from the might of the neighbouring USSR – led to a catastrophic famine resulting in the death of between 36 and 55 million people."

October 1949: Parade of the Waking Giant
"Mao Zedong understood the symbolic importance of the 1949 parade in Tiananmen Square, organized to celebrate his coming to power and to officially announce that the People’s Republic of China had been established. Yet due to China’s vast linguistic diversity, only a tiny fraction of the assembled crowd could understand the words that Mao spoke. In this documentary, filmmaker Peter Du Cane captures a critical moment in Chinese history through his account of the story behind the first National Day ceremony. Parade participants share memories of the planning that went into the event while Du Cane embarks on a treasure hunt to find the lost, full text of Mao’s pivotal speech."

The Powerhouse
"China of the Shang and Han dynasties gained cultural and technological superiority through such innovations and inventions as silk production, steel making, printing, gunpowder, and the sea-going junk."

The Story of China With Michael Wood
"...explores the history of the world’s oldest continuous state, from the ancient past to the present day. Home to over a billion people, China is the new super power, a country we all want. Michael joins the Qin family reunion, as 300 relatives gather to worship their ancestors." 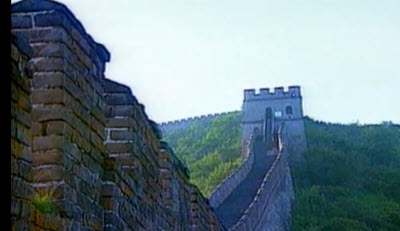