The Beekeeper and His Son: Portrait of a Family Business in China
"The widening gap between generations in China today is at the heart of this deeply resonant documentary about a son, recently returned from the city, trying to modernize his aging father's beekeeping business." (Kanopy)

China Blue
"Like no other film before, China Blue is a powerful and poignant journey into the harsh world of sweatshop workers. Shot clandestinely, this is a deep-access account of wh"at both China and the international retailers don't want us to see: how the clothes we buy are actually made."

China or Bust! Chasing Success in the World's Fastest-Growing Economy
"There are fortunes to be made in China today—but fortune-seekers from overseas face immense challenges. This program offers three engaging business case studies, each following a Western entrepreneur who grapples with Chinese business practices and culture. Tony Caldera’s cushion business has been ruined by Chinese imports, but he hopes for a turnaround by building a factory here. Peter Williams is about to embark on the toughest challenge of his life: selling an energy-saving device to the Chinese. Finally, there’s Vance Miller, who gained notoriety for selling cheap Chinese kitchens in Britain. Now he’s in China, determined to overcome setbacks. All three studies are ideal for sparking discussion and analysis in international business courses."

China Upside Down
"In 1992, Deng Xiaoping's infamous slogan 'it is glorious to get rich' unleashed one of the biggest revolutions in the thousand year-old country of China. Deng threw the 'classless society' and the 'equal division of the means of production' to the wind. As the narrator says, 'You can smell money everywhere.' Foreigners are no longer suspect. Since 1992 China's 'socialism' has adapted to the entrepreneurial spirit. Success stories abound, but in the Chinese cultural tradition, it is often the family, rather than the individual, which achieves success. This film profiles several families who rose from subsistence incomes to fabled luxury through the inventiveness and ambition of the extended family. Iapitalism and communism that is becoming present day China...:"

China's Challenges: Where is China’s Economy Going?
"While China is an economic superpower, its cheap-labor advantage is ending; its air and water are polluted; and its society is fractured by rich and poor. How can China achieve its goal of becoming a “moderately well off society” in a world of turbulent markets and a society of social disparities?""

The Hidden China
"..takes an in-depth look into this country's meteoric rise to economic superpower in this behind the scenes show. Through access to exclusive interviews and on-camera visits to areas forbidden to journalists, discover how China has rapidly changed from a state run disaster to the world's powerful economy. China is attempting to do in one generation, what other countries have needed three to accomplish. From one of the world's largest gaming industries, to global corporations, China is now most certainly on the world's stage. In the 1970's, thanks to Supreme Leader Deng Xiaoping's pragmatism, China moved from a classic Soviet style command economy to a consumer economy virtually from scratch..."

Made in China
"...tells one of the millions of stories of migrants from rural China who comprise the backbone of the Chinese economic miracle. It provides a human face behind the ubiquitous label 'Made in China' This massive dislocation of people may well represent the largest, most rapid migration in human history. The film demonstrates how one generation of Chinese is experiencing the culture shock of an Industrial Revolution which took centuries in the West. It is inevitably both an elegy for a lost way of life and a grassroots view of what could become the most powerful economic power on earth."

North China Factory
"...gives the audience a chance to see a factory community in China where over six thousand workers process, spin and weave raw cotton into ninety million yards of high-quality cloth per year. Also seen are the workers' residential, social, recreational and educational facilities, all of which are located on factory property. Highlights of the film are the retirement and wedding ceremonies, in which factory management plays a major part. The film is an engrossing study of a lifestyle that is very different from that of the Western world."

Opening the Door: How Deng Xiaoping Transformed China's Economy
"Given the vitality of China’s economy today, it is difficult to imagine that Deng Xiaoping’s early reforms met any resistance—but they did. This program examines Deng’s transformation from a Maoist functionary into the leader who broke from pure Communism and, despite the highest of stakes, reinvented his country. Helping viewers understand Deng’s creation of China’s special economic zones, the film features commentary from Chinese journalists and political insiders—as well as from Zbigniew Brzezinski, national security advisor in the Carter administration, and Sidney Rittenberg, an American expatriate in China during the Mao and Deng years."

Real Leap Forward
"China is fast becoming one of the world's industrial powerhouses. But hundreds of millions of Chinese still live in poverty, far from the coastal regions generating the new wealth. As elsewhere in the world, the gap between the rich and the poor is growing. The Chinese government is trying to address the problem -- through targeted poverty reduction programs. As Lu Fei Jie, Director General of China's State Council Leading Group on Poverty, sums it up, it is more than just a relief program - 'we do not just supply money. We focus on helping people to improve their capabilities to develop the areas by themselves...."

Struggle
"This powerful documentary explores the cruel realities of sweatshop labor and workplace injury in China, and one lawyer's mission to defend worker's rights. Shenzhen, one of China's most prosperous cities, attracts thousands of migrant workers every year. These workers come with dreams of opportunity and success, but many find themselves in dangerous working conditions with no regulations to protect them.Struggle  tells the story of three workers who lost their limbs in factory accidents that are all too common in China..."

We The Workers
"...follows labor activists as they find common ground with workers, helping them negotiate with local officials and factory owners over wages and working conditions. Threats, attacks, detention and boredom become part of their daily lives as they struggle to strengthen worker solidarity in the face of threats and pressures from the police and their employers. In the process, we see in their words and actions the emergence of a nascent working class consciousness and labor movement in China."

Young and Restless in China: Young Professionals Striving for Success in China
"A riveting and poignant journey,this film  tracks the lives of nine ambitious young Chinese professionals who are struggling to make it in this very tumultuous and rapidly changing society. Whether defying Eastern cultural traditions in pursuit of more Western values, struggling through government protocols to start a new business, or fighting to preserve the environment, this new generation is caught between the bonds of their nation's history and their own quest for a very different future..." (Kanopy) 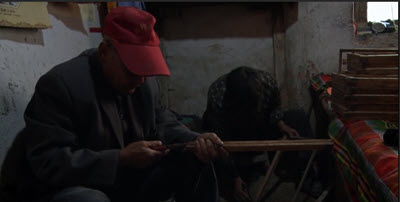 (The Beekeeper and His Son)