Nanjing
"Although the Nanjing Massacre, a series of war crimes committed by Japanese troops in China's capital during the second Sino-Japanese War, occurred seventy years ago, the nature and extent of these atrocities remains the subject of continuing historical debate and the source of political tensions between China and Japan. During the military occupation, Japanese troops engaged in arson, rape, looting and executions of prisoners of war and civilians, including women and children. Debate continues to rage over the extent of the atrocities and the number of deaths, with some Japanese denying any atrocities took place, but credible estimates of non-combatant deaths range from 100,000 to 300,000..."

Nanking:The 1937 Massacre
"This award-winning film recounts the 1937 Nanking Massacre committed by the Japanese army in the former capital city of China. In the winter of 1937, the Japanese army occupied Nanking, where they killed more 200,000 people and raped tens of thousands of Chinese women. In order to protect Chinese civilians, a small group of European and American expatriates, including Western missionaries, professors, and businessmen, banded together, risking their own lives to form the Nanking Safety Zone and ultimately saving 250,000 Chinese individuals."

The Rape of Nanking
"Over the course of six weeks in 1937-38, Imperial Japanese forces massacred hundreds of thousands of Chinese civilians and prisoners of war as the Empire of the Rising Sun turned China’s capital, Nanking, into a veritable Hell on Earth. This program seeks both to expose and to understand that shocking outrage against humanity through the testimonies of the last surviving Japanese veterans and the recollections of Chinese eyewitnesses. Rarely seen newsreel and amateur footage, uncensored personal photos, and excerpts from diaries are interspersed throughout. No human rights video collection can be considered complete without an account of the atrocity that history has labeled the Rape of Nanking. Some content may be objectionable."

The Rape of Nanking: Massacre on a Monumental Scale
"On December 13, 1937, Japanese troops overran Chinese forces and occupied the city of Nanking. This film unflinchingly documents the death and destruction that ensued as, over the following two months, more than 350,000 Chinese soldiers and civilians were murdered. So sickening was the spectacle that John Rabe, a Nazi representative in the city, was moved to save a quarter million Chinese. The Rape of Nanking draws extensively on Rabe’s 1,200-page diary for a unique perspective on the events of that period, while interviews with descendants of the victims and eyewitnesses to the crimes—along with gruesome photos—testify to the grim facts of one of the most horrifying episodes of the 20th century." 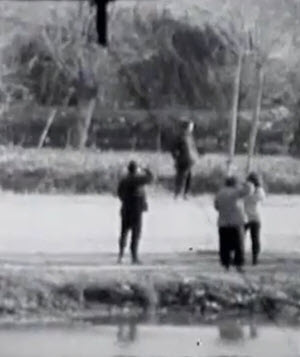 (The Rape of Nanking)