China Inside Out: Building Relationships with the Next Superpower
"Many Americans fear China’s growing strength and influence around the world. But the rise of China is an unavoidable geopolitical event, according to John Thornton, professor and director of Global Leadership at Tsingua University in Beijing. This ABC News program features interviews with Thornton and other experts who examine America’s need to forge a stronger relationship with China. The program also studies China’s approach to the U.S. and other nations, such as Cambodia, Angola, and Brazil...."

China: The Rebirth of an Empire
"Can China replace the U.S. as the world’s preeminent power? And if it did, what type of power would it wield? In Pakistan and Afghanistan, China’s investment in infrastructure along with a flow of low-cost goods has beat out U.S. foreign policy in winning the hearts of the people. Yet China’s relations with India become strained over the issue of Tibet, and in Hong Kong brutal crackdowns on Falun Gong make a mockery of the slogan 'one country, two systems.' This program travels throughout Asia to study the relationships China has with its closest neighbors, and to examine the U.S.-China balance of power...."

China's Nuclear Bomb
"In 1964 Mao Zedong’s People’s Republic became the fifth nation to test a nuclear weapon, changing the balance of power in eastern Asia, and the rest of the world, forever. Set against the backdrop of the developing Cold War, this documentary uses personal interviews and extraordinary archival footage in its dramatic account of the making of China’s first atomic bomb. Acclaimed director Peter Du Cane weaves historical data with human logistics as he charts the construction of testing facilities, obtaining of materials, and recruitment of scientists—who couldn’t tell their families about the top-secret project—while keeping the implications of global politics always in sight."

China's Pakistani Revolution
"China's 65 billion dollar investment in Pakistan's stagnating economy is the flagship project of President Xi's One Belt, One Road policy. We journey across Pakistan to discover the splurge of roads, railways, dams and pipelines China is building."

The Coming War on China
"A nuclear war between the United States and China is not only imaginable but a current 'contingency', says the Pentagon. Filmed over two years across five potential flashpoints in Asia and the Pacific, this film eveals the build-up to war on more than 400 US military bases that encircle China in a 'perfect noose'. Using rare archive and remarkable interviews with witnesses, Pilger's film discloses America's secret history in the region - the destruction wrought by the equivalent of one Hiroshima every day for 12 years, and the top secret 'Project 4.1' that made guinea pigs of the population of the Marshall Islands.In key interviews from Pentagon war planners to members of China's confident new political class, who rarely feature in Western reports, Pilger's film challenges the notion and propaganda of China as a new 'enemy'...."

Journey to the West
"Six countries in 10 days! A group of Chinese tourists visit Europe for the very first time traveling by bus at whirlwind speed. More and more Chinese tourists visit Europe every day. What do they seek? What is their mental picture of Europe before their journey starts? What are their thoughts when they discover it? This documentary road movie captures with humor and spirit the cultural differences between China and the West in a play of mirrors and contrasts...."

Richard Nixon's Visit to China, 1972
"This historical documentary from the CIA Film Library covers President Richard Nixon’s visit to Beijing and the Great Wall of China. From the National Archives and Records Administration."

Voyage of the Dragon King
"In the 15th century, China was already a political and economic powerhouse in Southeast Asia, when the reigning Ming emperor decided to launch sea expeditions to countries beyond the horizon. This film explores this unique chapter in the China’s history through the adventures of Admiral Zheng He: Hui-Chinese court eunuch, mariner, explorer, diplomat, and fleet admiral, who commanded expeditionary voyages to Southeast Asia, South Asia, the Middle East, and East Africa from 1405 to 1433. Zheng He led seven expeditions of 800 vessels capable of carrying up to 1,000 people each. Based on the maps produced on these trips, some believe these expeditions circumnavigated the globe and may have even discovered the New World before Columbus."

What's For Dinner?
"Meat is now central to billions of people's daily meals. The environmental, climate, public health, ethical, and human impacts are enormous and remain largely undocumented. 'What's For Dinner?' explores this terrain in fast-globalizing China through the eyes of a retired pig farmer in rural Jiangxi province; a vegan restaurateur in Beijing; a bullish young livestock entrepreneur; and residents of the province known as the 'world's factory' contending with water polluted by wastes from pig factory farms. They personalize the vast trends around them, in a country on the cusp of becoming a world power. Given that every fifth person in the world is Chinese, what the Chinese eat and how China produces its food, affects not only China, but the world, too...."

When China Met Africa
"A historic gathering of over 50 African heads of state in Beijing reverberates in Zambia where the lives of three characters unfold. Mr. Liu is one of thousands of Chinese entrepreneurs who have settled across the continent in search of new opportunities. He has just bought his fourth farm and business is booming. In northern Zambia, Mr. Li, a project manager for a multinational Chinese company, is upgrading Zambia's longest road. Pressure to complete the road on time intensifies when funds from the Zambian government start running out...." 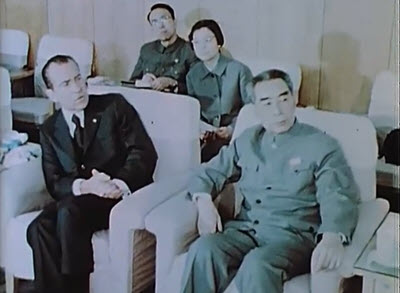