Of Shadows
"... is set in the unique landscape of China’s Loess Plateau, where the shadow play, as an enigmatic art form, has entertained people and deities for centuries. The film follows a lively and resilient group of shadow play performers as they navigate between the rural staging of ancient plays and the urban spectacle of national cultural heritage.The film starts when the local performers in a small county called Huanxian are gathered to rehearse for the region’s shadow theatre festival. The performance of modern cultural preservation is contemplated, as the folk artists move towards a grand stage. ... "

Sichuan: Pandas, Bamboo, and Spices
"Surrounded by an awe-inspiring mountain landscape, China’s Sichuan province is celebrated for its natural wonders and distinctive cuisine. This program guides viewers through many of Sichuan’s features, including the Jiuzhaigou National Park, a UNESCO World Heritage site; a bamboo forest area that is among the last continuous habitats of the giant panda; mountain routes and passes frequently used by Tibetan minorities; a misty, subtropical plain with ancient irrigation systems and other reminders of millennia-old cultures; and historical sites at Emei Shan, the highest of China’s four sacred Buddhist mountains. The provincial capital, Chengdu, once a center of brocade manufacturing, now brims with teahouses."

Still Tibet
"Embarking on a deep journey through one of the most remote ethnically Tibetan areas of China's Sichuan Province, filmmaker Miguel Cano hitchhikes, motorbikes and takes to foot to reach parts of the region that usually go untouched by tourists. With incredible cinematography, he journeys throughout the holy region to discover those fighting to preserve their spiritual and national identity, exposing a vulnerable civilization that retains an extraordinary mystical essence."

A Song for Tibet
"The mythical image of Tibet as the land of snow and mountains and burgundy-clad monks and prayer wheels often hides the tragedy of a forgotten people. Since the 1950 invasion of their territory by China, Tibetans have been struggling for cultural and political survival in a world surprisingly indifferent to their plight. Filmed in the Indian Himalayas and in Canada, A Song for Tibet tells the dramatic story of the efforts by Tibetans in exile, including the Dalai Lama, to save their homeland and preserve their heritage against overwhelming odds."

Through the Glass Darkly
"On a high-land Tibetan pasture, a screening event unfolds quietly. Monks, herdsmen and their families gather by the screen to observe life captured through their own lenses."

Up the Yangtze
"In China, it is simply known as 'The River.' But the Yangtze -- and all of the life that surrounds it -- is undergoing a truly astonishing transformation wrought by the largest hydroelectric project in history, the Three Gorges Dam. Canadian documentary filmmaker Yung Chang returns to the gorgeous, now-disappearing landscape of his grandfather's youth to trace the surreal life of a 'farewell cruise' that traverses the gargantuan waterway.."

Yunnan: Enchanted Forests and Shamans
"Located in the southwest of China, Yunnan province is home to more ethnic minorities than any other region of the country. This program examines several Yunnan-based societies and aspects of their cultures. The Sani community is found near the stone forest of Shilin, an astonishing example of karst geography and a key site of the massive annual Torch Festival. In Yuanyang, the Hani people are the creators of a sophisticated irrigation system known as the Steps to Heaven. Dali, capital of the ancient Bai kingdom, features towers rising high above the city gates and the largest Buddhist temple complex in China. And the 800-year-old city center of Lijiang, a UNESCO World Heritage site, is home to numerous artisans and pictographic calligraphers." 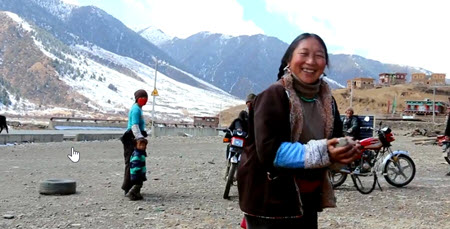