Fine Rain: Politics and Folk Songs in China
"Whether they were crafted to spread Mao’s message of class struggle or spun from the fabric of everyday life, Chinese folk songs carry with them immense historical and cultural importance. This program examines a wide range of songs and melodies from the country’s pre-Communist era to the Cultural Revolution, energized by a rich progression of archival footage, photographs, interviews, and present-day renditions sung in homes and on street corners. The origins, meanings, and political impact of several well-known songs are described, along with an illustration of jianpu, the traditional Chinese system of musical notation, and the distinction between haozi, or workmen’s songs, and the urban style known as xiaodiao."

History as a Mirror: Using China's Past to Shape Its Future
"This program seeks to understand how the Chinese government, arguably the world’s most elaborate and long-lived bureaucracy, has managed to balance the tension between controlling its people and keeping them contented enough to sustain national stability. Events unfolding at the village level in Sichuan Province demonstrate the dynamics of an evolving system of rule modeled on Marxism and informed by the legacies of Qin Shihuangdi and Confucius. Can the centralized command and control system first established so long ago continue to sustain China as it moves toward a market-style economy?"

Maostalgia
"The transformation of China into a global superpower raises some of the most challenging questions of our time – and this revealing series seeks out the answers. Will this turn out to be China’s century or will the Red Dragon crash and burn? Niall Ferguson travels through this vast country to find out how a fifth of humanity can live under a Communist system of government with a capitalist economy when, according to all the laws of history, it should fall apart. Held together for more than 2000 years, firstly by imperial rule and now by an imperious Communist Party, what does China stand for? Ferguson talks to the people who know – including its new billionaires, survivors of Chairman Mao’s regime, ardent young nationalists and those defending China’s rural poor." 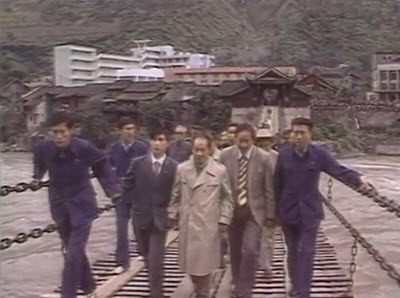 (Born Under the Red Flag)