China 21
"This eye-opening documentary follows four Chinese families as they step into the 21st century. Working without official permits, the filmmakers used compact digital video gear to record intimate portraits of ordinary people living in tumultuous times, capturing candid and sometimes emotional interviews. Families are small – one child in the city, two in the country – so children hold center stage. Veterans of the Cultural Revolution are saving up to send their son to business school...."

China Heavyweight
"Follows a charismatic former boxer as he trains teenagers in China and tries to get back into the ring.'

China Revisited
"Lana reunites with her sole surviving Auntie, who at 90 lives in a rundown apartment that she does not want to leave since her neighbors watch out for her. Lana finds cousins she never met, some who led difficult lives under the Communists, but others who are now affluent. They show her the new China, a mingling of old traditions, such as tea tasting, with today's predilection for a western life style. We follow Lana as she visits old haunts, like the former French Club now transformed to the plush Garden Hotel. As she tours the country the viewer is given a quick history lesson of China's past by this insightful guide, infused with personal poignancy."

China's Earthquake
"On May 12, 2008, a massive earthquake struck China's Sichuan province, leaving 80,000 dead or missing and millions homeless. In the disaster's wake, China's government presented a new face to the world, permitting increased media coverage, accepting international aid, and expressing sympathy for the quake's victims. Was this the beginning of a new openness in China? And what is the future for the people of Sichuan? China’s Earthquake examines these questions through the stories of four survivors.Sichuan TV reporter Zhang Qian finds herself in the middle of the disaster zone, filing her first ever uncensored live reports. China watches transfixed as she interviews Chen Jian, a 26-year-old trucker who had been pinned down by massive concrete slabs for three days. ..." 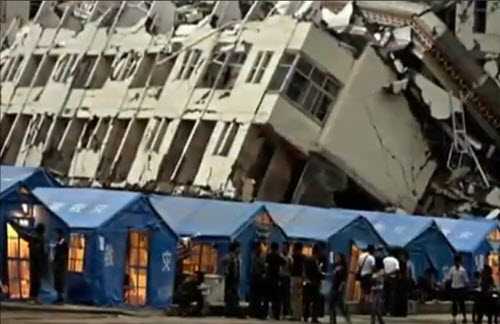