Jacques Brel Is Aive and Well and Living in Paris
"...an American musical revue of the songs of Jacques Brel."

Jamaica
"...a musical with a book by Yip Harburg and Fred Saidy, lyrics by Harburg, and music by Harold Arlen.  Set on a small island off the coast of Jamaica, the musical tells about a simple island community fighting to avoid being over-run by American commercialism."

Jane Eyre
"...a musical drama with music and lyrics by composer-lyricist Paul Gordon and a book by John Caird, based on the novel by Charlotte Brontë. The musical premiered on Broadway in 2000."

Jekyll & Hyde
"...a musical based on the novella Strange Case of Dr. Jekyll and Mr Hyde by Robert Louis Stevenson. The original stage conception was by Steve Cuden and Frank Wildhorn. The music is by Wildhorn and the lyrics and book are by Leslie Bricusse."

Jennie
"a musical with a book by Arnold Schulman, music by Arthur Schwartz, and lyrics by Howard Dietz, and starred Mary Martin. The plot focuses on actors and married couple Jennie Malone and James O'Connor, who tour the country in popular melodramas. Much of the action consists of elaborate spoofs of the type of entertainment offered to audiences in the early 20th century."

Jerome Robbins' Broadway
"...an anthology comprising musical numbers from earlier shows that were either directed or choreographed by Jerome Robbins."

Jersey Boys
"...a jukebox musical with music by Bob Gaudio, lyrics by Bob Crewe and the book by Marshall Brickman and Rick Elice. It is a documentary-style musical, based on the lives of one of the most successful 1960s rock 'n roll groups, the Four Seasons."

Jesus Christ Superstar (OBC) & (2018 NBC Television Event)
"...a musical by Andrew Lloyd Webber, with lyrics by Tim Rice. The musical started off as a rock opera concept recording before its first staging on Broadway in 1971. The musical is based very loosely on the Gospels' account of the last week of Jesus' life, beginning with the preparation for the arrival of Jesus and his disciples in Jerusalem, and ending with the crucifixion."

Jimmy
"...a 1969 flop musical about the life and times of New York City Mayor Jimmy Walker."

Joseph and the Amazing Technicolor Dreamcoat
"...an Andrew Lloyd Webber musical with lyrics by Tim Rice. The story is based on the 'coat of many colors' story of Joseph from the Hebrew Bible's Book of Genesis."

A Joyful Noise
"...is a musical with a book by Edward Padula and music and lyrics by Oscar Brand and Paul Nassau. The 1966 Broadway production was a flop but introduced choreographer Michael Bennett in his Broadway debut. Based on Mississippi author Borden Deal's 1959 novel The Insolent Breed, the story centers on Shade Motley, a fiddler who arrives in a small Southern town and shocks the stern community with his exuberant love of hillbilly music and life in general."

Juno
"...a musical with music and lyrics by Marc Blitzstein and book by Joseph Stein, based closely on the 1924 play Juno and the Paycock by Sean O'Casey. The original Broadway production opened at the Winter Garden Theatre, New York, on March 9, 1959. Despite light moments, the musical, like the play, is essentially a tragedy. Ths story centers around the disintegration of an Irish family in Dublin in the early 1920s, during the Irish War of Independence. Juno is a hardworking matriarch who strives to hold her family together in the face of war, betrayal, and her worthless husband's drinking..." 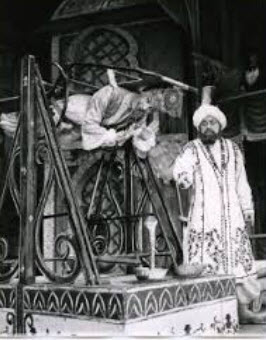