Rags (1991 Studio Cast)
"...a musical with a book by Joseph Stein, lyrics by Stephen Schwartz, and music by Charles Strouse

Ragtime
"...a musical with a book by Terrence McNally, lyrics by Lynn Ahrens, and music by Stephen Flaherty. Based on the 1975 novel by E. L. Doctorow, Ragtime tells the story of three groups in America, represented by Coalhouse Walker Jr., a Harlem musician; Mother, the matriarch of a WASP family in New Rochelle, NY; and Tateh, a Latvian Jewish immigrant."

Raisin
"...a musical theatre adaptation of the Lorraine Hansberry play A Raisin in the Sun, with songs by Judd Woldin and Robert Brittan, and a book by Robert Nemiroff (who was Hansberry's former husband) and Charlotte Zaltzberg. The story concerns an African-American family in Chicago in 1951."

Redhead
"..a musical with music composed by Albert Hague and lyrics by Dorothy Fields, who with her brother, Herbert, along with Sidney Sheldon and David Shaw wrote the book/libretto. Set in London in the 1880s, around the time of Jack the Ripper, the musical is a murder mystery in the setting of a wax museum."

Regina (1958 New York City Opera) & (1991 Studio Cast)
"...an opera by Marc Blitzstein, to his own libretto based on the play The Little Foxes by Lillian Hellman. Blitzstein chose this source in order to make a strong statement against capitalism. In three acts, the musical style has been described as new American verismo, abounding in the use of spirituals, Victorian parlour music, dance forms, ragtime, aria and large, symphonic score..."

Rent
"...a musical with music and lyrics by Jonathan Larsonnased on Giacomo Puccini's opera La Bohème. It tells the story of a group of impoverished young artists and musicians struggling to survive and create in New York's Lower East Side in the thriving days of Bohemian Alphabet City, under the shadow of HIV/AIDS."

Rex
"...a musical with music by Richard Rodgers, lyrics by Sheldon Harnick and libretto by Sherman Yellen, based on the life of King Henry VIII."

The Ring of Fire
"...a jukebox musical based on the music of Johnny Cash."

Rink
"In 1984, Kander and Ebb collaborated with librettist Terrence McNally to present Chita Rivera and Liza Minelli as mother and daughter."

The Roar of the Greasepaint, the Smell of the Crowd
"...a musical with a book, music, and lyrics by Leslie Bricusse and Anthony Newley.Resembling a music hall production more than a book musical, the allegorical plot examines the maintenance of the status quo between the upper and lower classes of British society in the 1960s. The two main characters are Sir and Cocky. Since Sir forever is changing the rules of the game of life, downtrodden young Cocky always gets the short end of the stick. Assisting Sir is his eager disciple Kid, anxious to pick up bits of wisdom while helping keep Cocky in his place."

The Robber Bridegroom (OBC) & (2016 Off-Broadway Revival)
"..is a musical with a book and lyrics by Alfred Uhry and music by Robert Waldman. The story is based on the 1942 novella by Eudora Welty of the same name, with a Robin Hood-like hero; the adaptation placed it in a late 18th-century American setting."

Roberta (1952 Studio Cast) & (2014 Studio Cast)
"...a musical from 1933 with music by Jerome Kern, and lyrics and book by Otto Harbach. The musical is based on the novel Gowns by Roberta by Alice Duer Miller."

Rock of Ages
"...a rock/jukebox musical, with a book by Chris D'Arienzo, built around classic rock hits from the 1980s, especially from the famous glam metal bands of the decade. The musical features songs from Styx, Journey, Bon Jovi, Pat Benatar, Twisted Sister, Steve Perry, Poison and Asia, among other well-known rock bands."

Rocky
"..a 2012 musical with music and lyrics by Stephen Flaherty and Lynn Ahrens, with a book by Thomas Meehan, adapted from a screenplay by Sylvester Stallone. The show roughly follows the plot of the 1976 film Rocky."

The Rocky Horror Show (2001 Broadway Revival)
"..a long-running British horror comedy stage musical, which opened in London on 19 June 1973. It was written by English-born New Zealander Richard O'Brien, and developed by O'Brien in collaboration with Australian theater director Jim Sharman."

The Rothschilds
"Based on The Rothschilds by Frederic Morton, it tells of the rise of the Rothschild family from humble beginnings in Germany, to their founding of their financial empire and growing political influence under the guidance of patriarch Mayer Rothschild, to their assistance in funding Napoleon's defeat, and how they secure a declaration of rights for European Jews in the midst of an oppressive era...:" 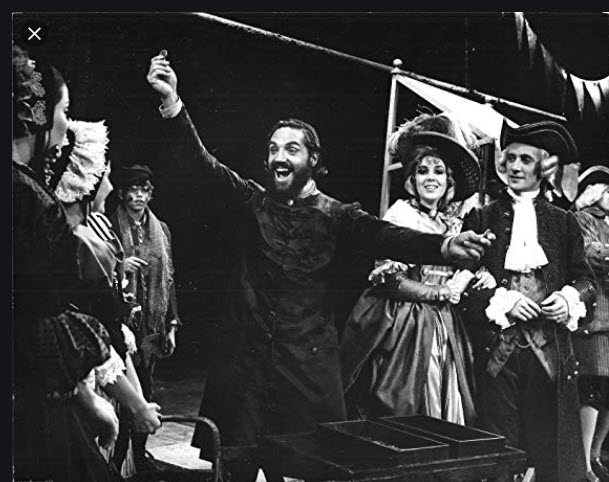