Natasha, Pierre, and the Great Comet of 1812
"..is a sung-through musical adaptation of a 70-page segment from Leo Tolstoy's War and Peace written by composer/lyricist Dave Malloy and directed by Rachel Chavkin."

The Nervous Set
"As fans of musical theater, we're used to offbeat projects, but this long-forgotten show takes the cake--and it's completely entrancing. The opening number alone makes nasty fun of the then-popular beatniks and is immediately followed by 'New York,' a list song enumerating all the awful things about the city. Rarely has so much bile been spilled on the New York stage--but perhaps that's because the show originated in St. Louis. Tommy Wolf's finger-snapping score and Fran Landesman's biting lyrics are very compelling, especially because it's hard to tell when they're serious and when they're drily sarcastic. The energetic cast, which includes Larry Hagman (best known as JR in Dallas), is backed by a jazz quartet, and the result often sounds strangely contemporary. And then you have some numbers, such as 'Night People,' that are almost Sondheimian. What a strange, wonderful little show this is." -- Elisabeth Vincentell

New Faces of 1952
"...a musical revue with songs and comedy skits. It ran on Broadway for nearly a year in 1952 and was then made into a motion picture in 1954. It helped jump start the careers of several young performers including Paul Lynde, Alice Ghostley, Eartha Kitt, Robert Clary, Carol Lawrence, Ronny Graham, performer/writer Mel Brooks (as Melvin Brooks), and lyricist Sheldon Harnick."

New Girl in Town
'...a musical with book by George Abbott and music and lyrics by Bob Merrill based on Eugene O'Neill's 1921 gloomy play Anna Christie, about a prostitute who tries to live down her past. unlike O'Neill's play, focuses on the jealousy of the character Marthy and on love’s ability to conquer all. The musical ends far more hopefully than the earlier play."

Next to Normal
"...a rock musical with book and lyrics by Brian Yorkey and music by Tom Kitt. Its story concerns a mother who struggles with worsening bipolar disorder and the effect that her illness has on her family. The musical also addresses such issues as grieving a loss, suicide, drug abuse, ethics in modern psychiatry, and suburban life."

Nice Work If You Can Get It
"...a musical with a score by George and Ira Gershwin, a book written by Joe DiPietro, and based on material by Guy Bolton and P. G. Wodehouse."

Nine (OBC)  & (2003 Broadway Revival)
"...a musical with a book by Arthur Kopit, music and lyrics by Maury Yeston. The story is based on Federico Fellini's semi-autobiographical film 8½. It focuses on film director Guido Contini, savoring his most recent (and greatest) success but dreading his imminent 40th birthday and a midlife crisis blocking his creative impulses and entangling him in a web of romantic difficulties in early-1960s Venice."

9 to 5
"...a stage musical with music and lyrics by Dolly Parton and a book by Patricia Resnick, based on the 1980 movie Nine to Five.. Resnick had co-written the screenplay with Colin Higgins, the director of the film, in which Parton had her first screen role."

No for an Answer
"Marc Blitzstein had a succès de scandale with his Federal Theater Project musical The Cradle Will Rock, about the attempt to form a steel workers' union in Steeltown, USA. Again writing book, music, and lyrics, Blitzstein's follow-up show to Cradle was No for an Answer, set at the Diogenes Club, a club for Greek-American workers at a summer resort town out of season. It concerns the attempted unionization of these workers; when the club's leader, Joe, is murdered and the clubhouse burned down, the cause is taken up by Joe's father, Nick." - Ken Mendelbaum

No, No Nanette (1971 Broadway Revival)
"...a musical comedy with lyrics by Irving Caesar and Otto Harbach, music by Vincent Youmans, and a book by Otto Harbach and Frank Mandel, based on Mandel's 1919 Broadway play My Lady Friends.. The farcical story involves three couples who all find themselves together at a cottage in Atlantic City in the midst of a blackmail scheme, focusing on a young, fun-loving Manhattan heiress, who naughtily runs off for a weekend, leaving her unhappy fiancé."

No Strings
"...a musical drama with a book by Samuel A. Taylor and words and music by Richard Rodgers, his only Broadway score written without a collaborator."

Now Is the Time for All Good Men
"...a 1967 Off-Broadway musical with music by Nancy Ford, book and lyrics and by Gretchen Cryer. It premiered at the Theatre De Lys on September 26, 1967."

Nunsense
"...a musical comedy with a book, music, and lyrics by Dan Goggin. Originating as a line of greeting cards, Goggin expanded the concept into a cabaret that ran for 38 weeks, and eventually into a full-length musical."

Nymph Errant (1990 Studio Cast)
"...a musical with music and lyrics by Cole Porter and book by Romney Brent based upon the novel by James Laver. The somewhat controversial story concerned a young English lady intent upon losing her virginity. Porter considered the score his best because of its worldliness and sexual sophistication." 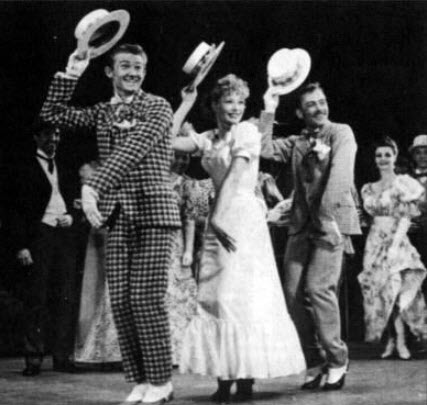