Dames at Sea
"...a musical with book and lyrics by George Haimsohn and Robin Miller and music by Jim Wise. The musical is a parody of large, flashy 1930s Busby Berkeley-style movie musicals in which an understudy steps into a role on Broadway and becomes a star."

Damn Yankees (OBC) & (1994 Broadway Revival)
"...a musical comedy with a book by George Abbott and Douglass Wallop and music and lyrics by Richard Adler and Jerry Ross. The story is a modern retelling of the Faust legend set during the 1950s in Washington, D.C., during a time when the New York Yankees dominated Major League Baseball. The musical is based on Wallop's novel  The Year the Yankees Lost the Pennant."

Dance a Little Closer
"..is a musical with a book and lyrics by Alan Jay Lerner and music by Charles Strouse. The story is an updated version of Robert E. Sherwood's 1936 antiwar comedy Idiot's Delight."

Darling of the Day
"...a musical with a book by Nunnally Johnson, lyrics by E.Y. Harburg, and music by Jule Styne. It is based on Arnold Bennett's novel Buried Alive and his play The Great Adventure. The show closed after only 31 performances on Broadway in 1968."

A Day in Hollywood, a Night in the Ukraine
"...a musical comedy consisting of two essentially independent one-act plays, with a book and lyrics by Dick Vosburgh and music by Frank Lazarus. Additionally, songs by other composers are incorporated into the score.The first act, A Day in Hollywood, a revue of classic Hollywood songs of the 1930s performed by singers and dancers representing ushers from Grauman's Chinese Theatre, features a significant amount of tap dance. The second, A Night in the Ukraine, is loosely based on Anton Chekhov's one-act play The Bear, and is presented in the style of a Marx Brothers movie."

Dear Evan Hansen
"...is a stage musical with music and lyrics by Benj Pasek and Justin Paul, and book by Steven Levenson. The musical has its origins in an incident that took place during Pasek's high school years at Friends' Central School. The musical   'takes the notion of a teenager, ... Evan Hansen, who invents an important role for himself in a tragedy that he did not earn.'"

Dear World
"...a musical with book by Jerome Lawrence and Robert E. Lee and music and lyrics by Jerry Herman. Based on Jean Giraudoux's play The Madwoman of Chaillot as adapted by Maurice Valency, it focuses on the Countess Aurelia, Constance and Gabrielle, who deviously scheme to stop businessmen from drilling for oil in the Parisian neighbourhood of Chaillot. The forces of idealism, love and poetry win over those of greed, materialism and science."

Dearest Enemy (2012 Studio Cast)
"...is a musical with a book by Herbert Fields, lyrics by Lorenz Hart, and music by Richard Rodgers. The musical takes place in 1776, during the American Revolutionary War, when Mary Lindley Murray detained British troops long enough in Manhattan to give George Washington time to move his vulnerable troops."

Debbie Does Dallas
"...an Off-Broadway musical with a book by Susan L. Schwartz, composed by Andrew Sherman, with Tom Kitt and Jonathan Callicutt providing additional music and lyrics. It is based on the 1978 pornographic film Debbie Does Dallas. The musical, like the movie, centers around high schooler Debbie and her friends' attempts to become Dallas Cowboys cheerleaders; however, the musical contains far less sexual content than the movie."

The Desert Song (1953 Studio Cast)
"...an operetta with music by Sigmund Romberg and book and lyrics by Oscar Hammerstein II, Otto Harbach and Frank Mandel. It was inspired by the 1925 uprising of the Riffs, a group of Moroccan fighters, against French colonial rule. It was also inspired by stories of Lawrence of Arabia aiding native guerrillas."

Dessa Rose
"...a musical based on the book by Sherley Anne Williams with book and lyrics by Lynn Ahrens and music by Stephen Flaherty. It tells the story of a young black woman and a young white woman and their journey to acceptance in 1847 in the ante-bellum South, as they tell their story to their grandchildren."

Destry Rides Again
" ...a 1959 musical comedy with music and lyrics by Harold Rome and a book by Leonard Gershe. The play is based on the 1939 classic film of the same name."

Dirty Rotten Scoundrels
"...musical, with music and lyrics by David Yazbek and a book by Jeffrey Lane; it is based on the film of the same name."

Disaster!
"...is s a musical comedy created by Seth Rudetsky, and written by Seth Rudetsky and Jack Plotnick. Earthquakes, tidal waves, infernos and the songs of the '70s take center stage in this homage to classic disaster films."

Do I Hear a Waltz? (OBC ) & (1991 Pasadena Playhouse revival)
"...a musical with a book by Arthur Laurents, music by Richard Rodgers, and lyrics by Stephen Sondheim. It was adapted from Laurents' 1952 play The Time of the Cuckoo, which was the basis for the 1955 film Summertime starring Katharine Hepburn."

Do Re Mi (OBC) & (1991 City Center Encores Revival)
"...a musical with music by Jule Styne, lyrics by Betty Comden and Adolph Green, and a book by Garson Kanin. The plot centers on a minor-league con man who decides to go (somewhat) straight by going into the business of juke boxes and music promotion."

Doctor Zhivago
"...is a 2011 musical composed by Lucy Simon, lyrics by Michael Korie and Amy Powers, book by Michael Weller; it is based on Boris Pasternak's 1957 novel Doctor Zhivago."

Dogfight
"The show, which features music and lyrics by Benj Pasek & Justin Paul and a book by Peter Duchan, was based on the 1991 film of the same name."

Donnybrook
"...is a musical, with music and lyrics by Johnny Burke and book by Robert E. McEnroe. It is based on the film The Quiet Man.

Dreamgirls
"...a Broadway musical, with music by Henry Krieger and lyrics and book by Tom Eyen. Based upon the show business aspirations and successes of R&B acts such as The Supremes, The Shirelles, James Brown, Jackie Wilson, and others, the musical follows the story of a young female singing trio from Chicago, Illinois called "The Dreams", who become music superstars."

The Drowsy Chaperone
"...a musical with book by Bob Martin and Don McKellar and music and lyrics by Lisa Lambert and Greg Morrison. The Drowsy Chaperone is an homage to American musicals of the Jazz Age, examining the effect musicals have on the fans who adore them."

Eileen
"..is a comic opera (sometimes described as a musical) with music by Victor Herbert and lyrics and book by Henry Blossom, based loosely on the 1835 novel Rory O'Moore by Herbert's grandfather, Samuel Lover, Set in 1798, the story concerns an Irish revolutionary arrested by the British for treason. Eileen, his nobly born sweetheart, helps him to escape by disguising him as a servant."

Enter Laughing (2009 Off-Broadway Revival)
"...a musical with a book by Joseph Stein and lyrics and music by Stan Daniels. Based on Stein's play Enter Laughing, which had been adapted from the Carl Reiner book of the same name and served as the basis for a 1967 film, it focuses on the journey of young David Kolowitz from factory helper to actor - and from insecure adolescence to self-assured adulthood - in just three whirlwind days in New York City in the late 1930s."

Ernest in Love
"...a musical with a book and lyrics by Anne Croswell and music by Lee Pockriss. It is based on The Importance of Being Earnest, Oscar Wilde's classic comedy of manners."

Escape to Margaritaville
"..is a musical that was first performed in 2017, featuring Jimmy Buffett songs. The plot revolved around about a part-time bartender and singer who falls for a career-minded tourist. The show features music and lyrics by Jimmy Buffett and is based on a book by Greg Garcia and Mike O'Malley."

Evil Dead
"...a musical stage play based on the cult classic film series." 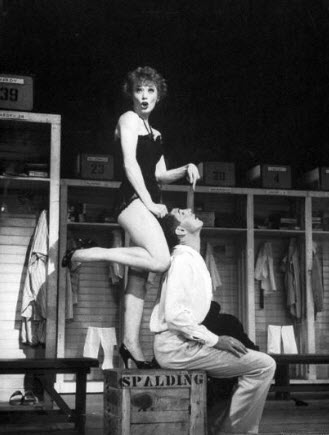