Of Thee I Sing (1952 Broadway Revival) & (1987 Studio Cast)
"...a musical with a score by George and Ira Gershwin and a book by George S. Kaufman and Morrie Ryskind. The musical lampoons American politics; the story concerns John P. Wintergreen, who runs for President of the United States on the  'love' platform. However, when he falls in love with sensible Mary Turner instead of Diana Devereaux, the beautiful pageant winner selected for him, he finds himself in political hot water."

Oh, Captain!
"...a musical comedy based on the film The Captain's Paradise.. The film starred Alec Guinness as a philandering ship's captain, with a wife in one port and a mistress in another. The musical starred Tony Randall, and updated the film's Gibraltar and Algiers setting to London and Paris. The score was by Jay Livingston and Ray Evans, with direction by José Ferrer."

Oklahoma! (OBC) & (1979 Broadway Revival)
"...the first musical written by composer Richard Rodgers and librettist Oscar Hammerstein II. The musical is based on Lynn Riggs' 1931 play, Green Grow the Lilacs.. Set in Oklahoma Territory outside the town of Claremore in 1906, it tells the story of cowboy Curly McLain and his romance with farm girl Laurey Williams. A secondary romance concerns cowboy Will Parker and his flirtatious fiancée, Ado Annie, a friend of Laurey's."

Oliver!
"...a British musical, with music and lyrics by Lionel Bart. The musical is based upon the novel Oliver Twist by Charles Dickens."

On a Clear Day You Can See Forever
"... a musical with music by Burton Lane and a book and lyrics by Alan Jay Lerner based loosely on Berkeley Square, written in 1929 by John L. Balderston. It concerns a woman who has ESP and has been reincarnated."

On the Town (1983 London Cast) &  (1992 Studio Cast) & (1997 Studio Cast) & (2014 Broadway Revival)
"...a musical with music by Leonard Bernstein and book and lyrics by Betty Comden and Adolph Green, based on Jerome Robbins' idea for his 1944 ballet Fancy Free, which he had set to Bernstein's music. The story concerns three American sailors on a 24-hour shore leave in New York City during wartime 1944. Each of the three sailors becomes enamoured of a particular woman — and of the city itself."

On the Twentieth Century (OBC) & (2015 Broadway Revival)
"...a musical with book and lyrics by Betty Comden and Adolph Green and music by Cy Coleman. Part operetta, part farce, part screwball comedy, the story involves the behind-the-scenes relationship of a temperamental actress and a director."

On Your Toes (1993 Broadway Revival)
"...a musical with a book by Richard Rodgers, George Abbott, and Lorenz Hart, music by Rodgers, and lyrics by Hart. While teaching music at Knickerbocker University, Phil 'Junior' Dolan III tries to persuade Sergei Alexandrovich, the director of the Russian Ballet, to stage the jazz ballet 'Slaughter on Tenth Avenue'. After becoming involved with the company's prima ballerina, Vera Barnova, Junior is forced to assume the male lead in 'Slaughter'. Trouble ensues when he becomes the target of two thugs hired by Vera’s lover and dance partner to kill him."

Once on This Island (OBC) & (2018 Broadway Revival)
"...a one-act musical with a book and lyrics by Lynn Ahrens and music by Stephen Flaherty. Based on the novel My Love, My Love by Rosa Guy, set in the French Antilles in the Caribbean Sea. The show also includes elements of the Romeo and Juliet story; as well as the fairytale of'"The Little Mermaid'."

Once Upon a Mattress (OBC) & (1997 Broadway Revival)
"...musical comedy with music by Mary Rodgers, lyrics by Marshall Barer and book by Jay Thompson, Dean Fuller, and Marshall Barer. It opened off-Broadway in May 1959, and then moved to Broadway. The play was written as an adaptation of the Hans Christian Andersen fairy tale 'The Princess and the Pea'."

110 in the Shade (OBC)  & (2007 Broadway Revival)
"...a musical with a book by N. Richard Nash, lyrics by Tom Jones, and music by Harvey Schmidt.Based on Nash's 1954 play The Rainmaker, it focuses on Lizzie Curry, a spinster living on a ranch in the American southwest, and her relationships with local sheriff File, a cautious divorcé who fears being hurt again, and charismatic con man Bill Starbuck, posing as a rainmaker who promises the locals he can bring relief to the drought-stricken area."

One Touch of Venus (OBC) & (2014 Studio Cast)
"...a musical with music written by Kurt Weill, lyrics by Ogden Nash, and book by S. J. Perelman and Nash, based on the novella 'The Tinted Venus'  by Thomas Anstey Guthrie, and very loosely spoofing the Pygmalion myth. The show satirizes contemporary American suburban values, artistic fads and romantic and sexual mores. Weill had been in America for ten years by the time he wrote this musical, and his music, though retaining his early haunting power, had evolved into a very different Broadway style."

The Only Girl (2015 Studio Cast)
"...is less well-known than many of the prolific Victor Herbert’s stage works, but its score is fresh, jaunty and delightful. "

Orange Blossoms (2014 Studio Cast)
"Victor Herbert's last operetta which was produced in 1922. Even closer to musical comedy, this is the show that produced the evergreen 'A Kiss in the Dark.'"

Out of This World (1995 New York City Center Encores)
"...a musical with music and lyrics by Cole Porter, and the book by Dwight Taylor and Reginald Lawrence. The show, an adaptation of Plautus' comedy Amphitryon, first opened on Broadway in 1950."

Over Here!
"...a musical with a score by Richard M. Sherman and Robert B. Sherman and book by Will Holt. Over Here! was a follow-up to the Sherman brothers' World War II musical Victory Canteen, an off-Broadway production that featured 1940s icon Patty Andrews. The setting is a cross-country train trip in the United States during World War II (hence the name of the play, in contrast to the popular patriotic war anthem entitled Over There). The show begins as a nostalgic look at 1940s America but quickly evolves into a social commentary about the fear of dying in battle, prejudice, and discrimination." 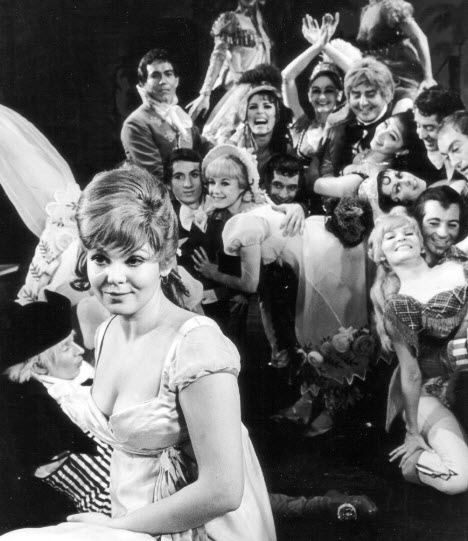 (ON A CLEAR DAY YOU CAN SEE FOREVER - Barbara Harris & company)