I Can Get It For You Wholesale
"...a musical with music and lyrics by Harold Rome and a book by Jerome Weidman based on his 1937 novel of the same title. The story is set in the New York City garment district in 1937, during the Great Depression, and the songs utilize traditional Jewish harmonies evocative of the setting and the period of the show."

I Do, I Do
"...a musical with a book and lyrics by Tom Jones and music by Harvey Schmidt.Based on the Jan de Hartog play The Fourposter, the two-character story spans fifty years, from 1895 to 1945, as it focuses on the trials and tribulations, laughters and sorrows, and hopes and disappointments experienced by Agnes and Michael Snow throughout their marriage. The set consists solely of their bedroom, dominated by the large fourposter bed in the center of the room."

I Had a Ball
"...musical with a book by Jerome Chodorov and music and lyrics by Jack Lawrence and Stan Freeman. Set on the Coney Island boardwalk, it focuses on matchmaking fortune teller Garside, who finds love with floozy Addie, and recent parolee Stan, who becomes involved with Ferris wheel operator Jeannie. Other characters include Ma Maloney, who heads the Alley Gang and tries to keep them out of the clutches of patrolling Officer Millhauser."

I Love You Because
"...a musical set in modern day New York, inspired by the Jane Austen novel Pride and Prejudice. It features lyrics by Ryan Cunningham, set to music by Joshua Salzman.

I Remember Mama (2002 Studio Cast)
"...musical with a book by Thomas Meehan, lyrics by Martin Charnin and Raymond Jessel, and music by Richard Rodgers. I Remember Mama originated as a memoir by Kathryn Forbes entitled Mama's Bank Account. It was adapted for the stage by John Van Druten in 1944; Richard Rodgers and Oscar Hammerstein II produced its original Broadway production. It was filmed in 1948, and served as the basis for a 1950s television series. Every incarnation basically was the same, a series of heartwarming vignettes centering on a family of Norwegian immigrants living in San Francisco in the early 20th Century. "

If/Then
"...a libretto by Brian Yorkey and a theatrical score by Tom Kitt, directed by Michael Greif. It tells the story of a 40-year old woman named Elizabeth who moves back to New York City for a fresh start."

Illya, Darling
"...a musical with a book by Jules Dassin, music by Manos Hadjidakis, and lyrics by Joe Darion, based on Dassin's 1960 film Never on Sunday."

In the Heights
"...a musical with music and lyrics by Lin-Manuel Miranda and a book by Quiara Alegría Hudes. The story explores three days in the characters' lives in the New York City Dominican-American neighborhood of Washington Heights."

In Transit
"... is a musical with book, music and lyrics by Kristen Anderson-Lopez, James-Allen Ford, Russ Kaplan and Sara Wordsworth. The musical, performed a cappella, ran Off-Broadway in 2010, and on Broadway in 2016. The musical relates the interrelated stories of New Yorkers who travel the city streets and subway."

Inside USA
"...musical revue by Arthur Schwartz (music) and Howard Dietz (lyrics) and was loosely based on the book Inside U.S.A. by John Gunther. Sketches were written by Arnold M. Auerbach, Moss Hart, and Arnold B. Horwitt."

Into the Woods
"...a musical with music and lyrics by Stephen Sondheim and book by James Lapine.The musical intertwines the plots of several Brothers Grimm fairy tales and follows them further to explore the consequences of the characters' wishes and quests."

Irene (1974 Broadway Revival)
"...is a musical with a book by James Montgomery, lyrics by Joseph McCarthy, and music by Harry Tierney. Based on Montgomery's play Irene O'Dare, it is set in New York City's Upper West Side and focuses on immigrant shop assistant Irene O'Dare, who is introduced to Long Island's high society when she is hired by one of its leading grande dames to help redecorate her home."

Irma La Douce
"...a musical with music by Marguerite Monnot and French lyrics and book by Alexandre Breffort. The English lyrics and book are by Julian More, David Heneker and Monty Norman. It was first produced in Paris in 1956."

It Shoulda Been You
"..is a musical with music by Barbara Anselmi and book and lyrics by Brian Hargrove. The musical involves a wedding which brings together the families who are quite, and comically, different."

It's a Bird, It's a Plane, it's Superman
"...a musical with music by Charles Strouse and lyrics by Lee Adams, with a book by David Newman and Robert Benton. It is based on the comic book character Superman created by Jerry Siegel and Joe Shuster and published by DC Comics." 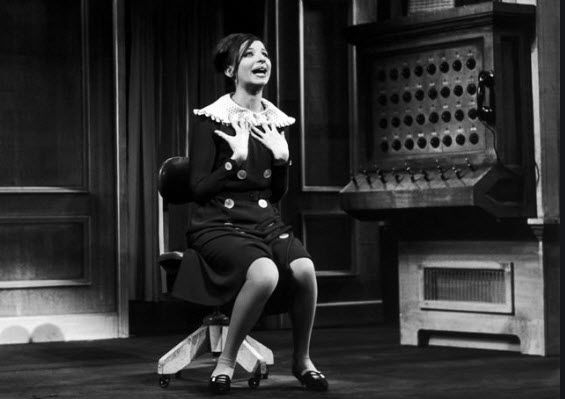 (I CAN GET IT FOR YOU WHOLESALE - Barbra Streisand)