Hair (OBC) & (2009 Broadway Revival)
"...a rock musical with a book and lyrics by James Rado and Gerome Ragni and music by Galt MacDermot. A product of the hippie counter-culture and sexual revolution of the 1960s, several of its songs became anthems of the anti-Vietnam War peace movement. The musical's profanity, its depiction of the use of illegal drugs, its treatment of sexuality, its irreverence for the American flag, and its nude scene caused much comment and controversy. The musical broke new ground in musical theater by defining the genre of "rock musical", using a racially integrated cast, and inviting the audience onstage for a 'Be-In' finale."

Hairspray (OBC) & (2016 NBC Television Event)
"...a musical with music by Marc Shaiman, lyrics by Scott Wittman and Shaiman and a book by Mark O'Donnell and Thomas Meehan, based on the 1988 John Waters film Hairspray. The songs include 1960s-style dance music and 'downtown rhythm' and blues. In 1962 Baltimore, Maryland, plump teenager Tracy Turnblad's dream is to dance on The Corny Collins Show, a local TV dance program based on the real-life Buddy Deane Show. When Tracy wins a role on the show, she becomes a celebrity overnight. She then launches a campaign to integrate the show. Hairspray is a social commentary on the injustices of parts of American society in the 1960s."

Half a Sixpence
"...a musical comedy written as a vehicle for British pop star Tommy Steele. It is based on H.G. Wells's novel Kipps: The Story of a Simple Soul. Steele plays Arthur Kipps, an orphan who unexpectedly inherits a fortune, and climbs the social ladder before losing everything and realizing that you just can't buy happiness."

Hallelujah, Baby!
"...a musical with music by Jule Styne, lyrics by Adolph Green and Betty Comden, and a book by Arthur Laurents. The show is 'a musical chronicle of the African American struggle for equality during the [first half of the] 20th century.'"

The Happiest Girl in the World
"...a musical with a book by Fred Saidy and Henry Mayers, lyrics by E.Y. Harburg, and music taken from the works of Jacques Offenbach. Based on the comedy Lysistrata by Aristophanes and Tales of Greek Mythology by Thomas Bulfinch, it focuses on the women of Ancient Greece and Sparta who, inspired by virginal goddess Diana, vow to withhold sex from their husbands and lovers until they promise to put an end to their fighting. Complications ensue when Diana's uncle and underworld ruler Pluto balks at the notion of peace and attempts to derail her plan."

Happy Hunting
"...a 1956 musical with a book by Howard Lindsay and Russel Crouse, lyrics by Matt Dubey, and music by Harold Karr. The plot focuses on wealthy Philadelphia Main Line widow Liz Livingstone and her efforts to find a royal husband for her daughter Beth."

The Happy Time
"...is a musical with music by John Kander, lyrics by Fred Ebb, and a book by N. Richard Nash loosely based on a 1950 hit Broadway play, The Happy Time by Samuel A. Taylor, which was in turn based on stories by Robert Fontaine. The original 1968 Broadway production was directed and choreographed by Gower Champion, who won Tony Awards in each category."

Hazel Flagg
"... is a musical with a book by Ben Hecht, lyrics by Bob Hilliard, and music by Jule Styne. The musical is based on the 1937 screwball comedy film Nothing Sacred. Ben Hecht was the primary writer of the film's screenplay."

Hedwig and the Angry Inch (OOBC) & (2014 Broadway Revival)
"...a rock musical about a fictional rock and roll band fronted by a genderqueer East German singer named Hedwig. Hedwig, formerly Hansel, assumes a female persona after a botched sex change operation which was performed to allow him to marry an American man and escape East Germany. The book is by John Cameron Mitchell, and the music and lyrics are by Stephen Trask."

Hello, Dolly! (OBC) & (2017 Broadway Revival)
"...a musical with lyrics and music by Jerry Herman and a book by Michael Stewart, based on Thornton Wilder's 1938 farce The Merchant of Yonkers, which Wilder revised and retitled The Matchmaker in 1955."

Henry, Sweet Henry
"...a musical with a book by Nunnally Johnson and music and lyrics by Bob Merrill. Based on the novel The World of Henry Orient by Johnson's daughter Nora and the subsequent film of the same name, the plot focuses on Valerie and Marian, two wealthy, love-struck teenagers who stalk an avant-garde composer and aging philanderer."

Here's Love
"...a musical with a book, music, and lyrics by Meredith Willson. Based on the classic film Miracle on 34th Street, it tells the tale of a skeptical little girl who doubts the existence of Santa Claus. When the real Kris Kringle inadvertently is hired to represent jolly St. Nick in the Macy's Thanksgiving Day Parade, he must convince the child and her cynical divorced mother (the department store's special events director) that he's the genuine article."

High Button Shoes
"...a musical with music by Jule Styne, lyrics by Sammy Cahn and book by George Abbott and Stephen Longstreet. It was based on the semi-autobiographical 1946 novel The Sisters Liked Them Handsome by Longstreet. The story concerns the comic entanglements of the Longstreet family with two con men in Atlantic City."

High Fidelity
"...musical with a book by David Lindsay-Abaire, lyrics by Amanda Green, and music by Tom Kitt. Based primarily on the Nick Hornby novel rather than the subsequent film version it inspired, the plot focuses on Rob Gordon, a Brooklyn record shop owner in his thirties obsessed with making top five lists for everything, always observing rather than participating in life. When his girlfriend Laura leaves him, he goes through a painful re-evaluation of his life and lost loves (with a little help from his music) and he slowly learns that he has to grow up and let go of his self-centered view of the world before he can find real happiness."

High Spirits
"...a musical with a book, lyrics, and music by Hugh Martin and Timothy Gray, based on the play Blithe Spirit by Noël Coward, about a man's problems caused by the spirit of his dead wife."

Honeymoon in Vegas
"...is a musical with a book by Andrew Bergman and music and lyrics by Jason Robert Brown. The musical is based on the 1992 movie of the same name which Bergman also wrote and directed'"

House of Flowers (OBC) & (1968 Off-Broadway Revival)
"...a musical by Harold Arlen (music and lyrics) and Truman Capote (lyrics and book), based on his own short story, first published in Breakfast at Tiffany's as one of three extra pieces besides the titular novella. This was Capote's only musical, and is the first theatrical production outside of Trinidad and Tobago to feature the new Caribbean instrument - the steel pan."

How Now Dow Jones
"...a musical comedy by  Elmer Bernstein, Carolyn Leigh and Max Shulman. How Now, Dow Jones, set in Wall Street, follows Kate who announces the Dow Jones numbers. Her fiancé will not marry her until the Dow Jones Industrial Average hits 1,000."

How to Succeed in Business Without Really Trying (OBC) & (2011 Broadway Revival)
"...a musical with music and lyrics by Frank Loesser and book by Abe Burrows, Jack Weinstock, and Willie Gilbert, based on Shepherd Mead's 1952 book of the same name." 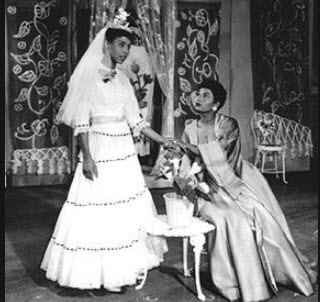