The Gay Life
"...a musical with a book by Fay and Michael Kanin, lyrics by Howard Dietz, and music by Arthur Schwartz. Based on a cycle of seven short plays by Arthur Schnitzler, published in 1893 and first staged in 1910, The Gay Life focuses on womanizing playboy Anatol Von Huber. The score is a mixture of traditional Broadway showtunes and operetta."

A Gentleman's Guide to Love & Murder
"..a musical comedy, with the book and lyrics by Robert L. Freedman and the music and lyrics by Steven Lutvak. It is based on the 1907 novel Israel Rank: The Autobiography of a Criminal by Roy Horniman. The Broadway production ultimately won four Tony Awards, including Best Musical at the 68th Tony Awards."

Gentlemen Prefer Blondes (OBC) & (2012 New York City Center Encores)
"...a musical with a book by Joseph Fields and Anita Loos, lyrics by Leo Robin, and music by Jule Styne, based on the best-selling novel of the same name by Loos. The story involves an American woman's voyage to Paris to perform in a nightclub."

George M!
"...a Broadway musical based on the life of George M. Cohan, the biggest Broadway star of his day who was known as 'The Man Who Owned Broadway.' The book for the musical was written by Michael Stewart, John Pascal, and Francine Pascal. Music and lyrics were, of course, by George M. Cohan himself, with revisions for the musical by Cohan's daughter, Mary Cohan."

Giant
"...a musical based on the 1952 Edna Ferber novel of the same name, with music and lyrics by Michael John LaChiusa and the book by Sybille Pearson.  The story follows a ranch family in Texas over 30 years, and the effect of the oil boom."

Gigi (OBC) & (2015 Broadway Revival)
"...a musical with a book and lyrics by Alan Jay Lerner and music by Frederick Loewe. It is based on a novel and 1958 hit musical film of the same name. The story concerns Gigi, a free-spirited teenaged girl living in Paris at the turn of the 20th century. She is being groomed as a courtesan in her family's tradition. Before she is deemed ready for her social debut, she encounters the bon vivant bachelor Gaston Lachaille, whom she captivates as she is transformed into a charmingly poised young lady."

Girl Crazy (1990 Studio Cast)
"...a 1930 musical with music by George Gershwin, lyrics by Ira Gershwin and book by Guy Bolton and John McGowan. Ethel Merman made her stage debut in this musical production."

The Girl in Pink Tights
"...opened on Broadway on March 5, 1954, and closed at a loss just 15 weeks later, told a potted history of the origins of the American musical, tracing them to a French ballet company stranded in New York in the years after the Civil War that joins in with a straight play to create the first musical, The Black Crook."

The Girl Who Came to Supper
"...is a musical with a book by Harry Kurnitz and music and lyrics by Noël Coward, based on Terence Rattigan's 1953 play The Sleeping Prince. The musical premiered on Broadway in 1963."

The  Glorious Ones
"...a musical with book and lyrics by Lynn Ahrens and music by Stephen Flaherty. Set in 17th-century Italy, it concerns a theatre group in the world of commedia dell'arte and theatre of the Italian Renaissance."

Glory Days
"...a musical with music and lyrics by Nick Blaemire and a book by James Gardiner about four high school friends reuniting a year after graduation."

Godspell (OOBC) & (2000 Off-Broadway Revival) & (2011 Broadway Revival)
"...a musical by Stephen Schwartz and John-Michael Tebelak. It opened off Broadway on May 17, 1971, The structure of the musical is that of a series of parables, based on the Gospel of Matthew."

The Golden Apple (OBC) & (2014 Irving Arts Center)
"...a musical adaptation of both the Iliad and Odyssey of Homer, with music by Jerome Moross and lyrics by John Treville Latouche. The show was one of the first musicals produced at the Off-Broadway Phoenix Theatre (in March 1954) and moved up to Broadway on April 20, 1954 at the Alvin Theater where the cerebral and through-sung musical played for only 125 performances despite rave reviews."

Golden Boy
"...a musical with a book by Clifford Odets and William Gibson, lyrics by Lee Adams, and music by Charles Strouse. Based on the 1937 play of the same name by Odets, it focuses on Joe Wellington, a young man from Harlem who, despite his family's objections, turns to prizefighting as a means of escaping his ghetto roots and finding fame and fortune. He crosses paths with Mephistopheles-like promoter Eddie Satin and eventually betrays his manager Tom Moody when he romantically becomes involved with his girlfriend Lorna Moon."

Golden Rainbow
"The music and lyrics for Golden Rainbow were by Walter Marks; the book was by Ernest Kinoy; and the musical was based on the film adaptation (by screenwriter Arnold Schulman) of the play A Hole in the Head."

Goldilocks
"...a musical with a book by Jean and Walter Kerr, music by Leroy Anderson, and lyrics by the Kerrs and Joan Ford. A parody of the silent film era when directors made quickie one-reelers overnight, it focuses on Maggie Harris, a musical comedy star retiring from show business in order to marry into high society, until producer-director Max Grady arrives to remind her she has a contract to star in his film Frontier Woman. The two battle and slapstick situations ensue as the movie evolves into an epic about Ancient Egypt and filming extends well beyond the amount of time Grady promised it would take to make the movie."

The Goodbye Girl
"...a musical with a book by Neil Simon, lyrics by David Zippel, and music by Marvin Hamlisch, based on Simon's original screenplay for the 1977 film of the same name."

Grand Hotel
"...a musical with a book by Luther Davis and music and lyrics by Robert Wright and George Forrest, with additional lyrics and music by Maury Yeston.Based on the 1929 Vicki Baum novel and play, Menschen im Hotel (People in a Hotel), and the subsequent 1932 MGM feature film, the musical focuses on events taking place over the course of a weekend in an elegant hotel in 1928 Berlin and the intersecting stories of the eccentric guests of the hotel, including a fading prima ballerina; a fatally ill Jewish bookkeeper, who wants to spend his final days living in luxury; a young, handsome, but destitute Baron; a cynical doctor; and a typist dreaming of Hollywood success."

Grand Tour
"...a musical with a book by Michael Stewart and Mark Bramble and music and lyrics by Jerry Herman. Based on S. N. Behrman's play Jacobowsky and the Colonel, the story concerns an unlikely pair. S.L. Jacobowsky, a Polish-Jewish intellectual, has purchased a car he cannot drive. Stjerbinsky, an aristocratic, anti-Semitic colonel, knows how to drive but has no car. When the two men meet at a Paris hotel, they agree to join forces in order to escape the approaching Nazis. Together with the Colonel’s girlfriend, Marianne, they experience many adventures while on the road, but trouble ensues when Jacobowsky falls in love with the young girl."

The Grass Harp
"One of those flop musicals that is sacred to hard-core Broadway fanatics is The Grass Harp. This is a 1971 musical based on the novel by Truman Capote, about a dotty spinster who runs away from her sister's house and goes to live in a treehouse rather than allow her sister to market her miracle dropsy cure. That's an over-simplified summary, of course, but it gives you an idea of what the story is like: a very delicate, whimsical fable about eccentric people. The musical adaptation, which ran only a week, was further proof that whimsy and delicacy rarely succeed on Broadway."

Grease (OBC) &  (1994 Broadway Revival) & (2007 Broadway Revival)
"...a 1971 musical by Jim Jacobs and Warren Casey. The musical is named for the 1950s United States working-class youth subculture known as the greasers. The musical, set in 1959 at fictional Rydell High School (loosely based on William Howard Taft School), follows ten working-class teenagers as they navigate the complexities of love, cars, and drive-ins. The score attempts to recreate the sounds of early rock and roll."

Grey Gardens
"...an American seriocomic musical with book by Doug Wright, music by Scott Frankel, and lyrics by Michael Korie, based on the 1975 documentary of the same title about the lives of Edith Ewing Bouvier Beale ("Big Edie") and her daughter Edith Bouvier Beale ("Little Edie") by Albert and David Maysles. The Beales were Jacqueline Kennedy's aunt and cousin, respectively. Set at Grey Gardens, the Bouviers' mansion in East Hampton, New York, the musical tracks the progression of their lives from their original status as rich and socially polished aristocrats to their eventual largely isolated existence in a home overrun by cats and cited for repeated health code violations. However, its more central purpose is to untangle the complicated dynamics of their dysfunctional mother/daughter relationship."

Greenwillow
"... is a musical with a book by Lesser Samuels and Frank Loesser and music and lyrics by Loesser. Based on the novel by B. J. Chute, the fantasy is set in the magical town of Greenwillow, where the eldest in each generation of Briggs men must obey the 'call to wander,' while the women they leave behind care for the home and rear their children in the hope that someday their husbands will return. Gideon loves his girlfriend, Dorrie, and would like nothing better than to settle down with her, and finds in the town's newest inhabitant, the Reverend Birdsong, an ally who will try to help him make his dream come true."

Groundhog Day
"...is a musical comedy with music and lyrics by Tim Minchin, and book by Danny Rubin. Based on the 1993 film of the same name written by Rubin and Harold Ramis."

Gutenberg! The Musical!
"...a musical written by Scott Brown and Anthony King. The play is performed as a backer's audition by Bud Davenport and Doug Simon, the authors of a musical about Johannes Gutenberg, which they are pitching to producers who might put their show up on Broadway. Because the minimally-talented and starry-eyed authors don't have a cast or an orchestra, Bud and Doug play all of the roles themselves, wearing hats with the characters' names on them and frequently switching said hats to indicate different characters. Minimal props, such as a cardboard box, pencils, and a chair, are used as well."

Guys and Dolls (OBC) & (1992 Broadway Revival) & (1996 Studio Cast)
"...a musical with music and lyrics by Frank Loesser and book by Jo Swerling and Abe Burrows. It is based on "The Idyll of Miss Sarah Brown" and "Blood Pressure", two short stories by Damon Runyon, and also borrows characters and plot elements from other Runyon stories, most notably "Pick the Winner"."

Gypsy (OBC) & (1973 London Cast) & (1990 Broadway Revival) & (2003 Broadway Revival) & (2008 Broadway Revival) & (2015 London Revival)
"...a musical with music by Jule Styne, lyrics by Stephen Sondheim, and a book by Arthur Laurents. Gypsy is loosely based on the 1957 memoirs of Gypsy Rose Lee, the famous striptease artist, and focuses on her mother, Rose, whose name has become synonymous with 'the ultimate show business mother.' It follows the dreams and efforts of Rose to raise two daughters to perform onstage and casts an affectionate eye on the hardships of show business life. The character of Louise is based on Lee, and the character of June is based on Lee's sister, the actress June Havoc." 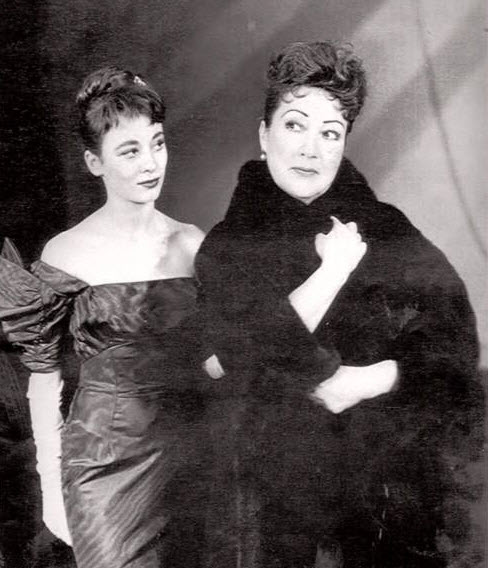