Fade Out Fade In
"...a musical with a book and lyrics by Betty Comden and Adolph Green and music by Jule Styne. The story involves the movie industry in the 1930s. It starred Carol Burnett, returning to the Broadway stage for the first time in four years."

Fame Becomes Me
"Martin Short's 2006 Broadway show Fame Becomes Me is a love letter to old-school showbiz doubling as a send-up of self-serving celebrity memoirs. This 'comedy musical' is obviously the work of someone who adores not only the golden age of Broadway but also that of a certain style of entertainment you may call vaudeville variety. The idea is that Short is looking back at his own life (with some liberties—if a celeb out there is not known for outrageous behavior, it's gotta be him) through songs and skits, and with the help of his own TV personae, such as Jiminy Glick and Ed Grimley. It helps that said songs were written by Marc Shaiman and Scott Wittman."

Fancy Nancy
"...a musical with a book and lyrics by Susan DiLallo, and music and lyrics by Danny Abosch. It is based on the popular Fancy Nancy book series by Jane O'Connor, illustrated by Robin Preiss Glasser..."

Fanny
"...a musical with a book by S. N. Behrman and Joshua Logan and music and lyrics by Harold Rome. A tale of love, secrets, and passion set in and around the old French port of Marseille, it is based on Marcel Pagnol's trilogy of plays entitled Marius, Fanny and César."

The Fantasticks
"...a 1960 musical with music by Harvey Schmidt and lyrics by Tom Jones. It tells an allegorical story, loosely based on the play The Romancers (Les Romanesques) by Edmond Rostand, concerning two neighboring fathers who trick their children, Luisa and Matt, into falling in love by pretending to feud and erecting a wall between their houses."

Fela!
"..a musical with a book by Bill T. Jones and Jim Lewis, based on music and lyrics by the late Nigerian singer Fela Kuti, with additional music by Aaron Johnson and Jordan Mclean and additional lyrics by Jim Lewis. It is based on events in the life of groundbreaking Nigerian composer and activist Fela Anikulapo Kuti. It portrays Kuti in the days when he was the target of 1,000 government soldiers assigned to end his public performances at the legendary Lagos nightclub The Shrine."

Fiddler on the Roof (OBC) & (2004 Broadway Revival)  & (2016 Broadway Revival)
"...a musical with music by Jerry Bock, lyrics by Sheldon Harnick, and book by Joseph Stein, set in Tsarist Russia in 1905. It is based on Tevye and his Daughters by Sholem Aleichem. The story centers on Tevye, the father of five daughters, and his attempts to maintain his family and Jewish religious traditions while outside influences encroach upon their lives. He must cope with both the strong-willed actions of his three older daughters—each one's choice of husband moves further away from the customs of his faith—and with the edict of the Tsar that evicts the Jews from their village."

Fifty Million Frenchmen (1991 Studio Cast)
"...a musical comedy with a book by Herbert Fields and music and lyrics by Cole Porter. The musical's plot is consistent with the standard boy-meets-girl plots of musical comedies of the first half of the twentieth century."

Finding Neverland
"..is an original musical with music and lyrics by Scott Frankel and Michael Korie and a book by James Graham. Inspired by the 1998 play The Man Who Was Peter Pan by Allan Knee and his 2004 film adaptation Finding Neverland."

Fine and Dandy (2004 Studio Cast)
"Part musical comedy, part vaudeville, and part social satire, Fine and Dandy wasn’t quite like any other show of its era. On the surface, it all seemed pretty standard: the novelty setting (here, a Tool and Die Factory), the chief comic with the sputtering monologues, the soubrette who’s there chiefly to lead the dance numbers, the star-crossed lovers, and the triple wedding just before the final curtain..."

Finian's Rainbow (OBC) & (2009 Broadway Revival)
"...a musical with a book by E.Y. Harburg and Fred Saidy, lyrics by Harburg, and music by Burton Lane. The 1947 Broadway production ran for 725 performances. The Irish-tinged score also includes gospel and R&B influences."

First Impressions
"...a Broadway musical with music and lyrics by George Weiss, Bo Goldman, and Glenn Paxton, and book by Abe Burrows, based on the stage adaptation by Helen Jerome of Jane Austen's classic novel Pride and Prejudice."

Fiorello!
"...musical about New York City mayor Fiorello H. LaGuardia, a reform Republican who took on Tammany Hall. The book is by Jerome Weidman and George Abbott, drawn substantially from the 1955 volume Life With Fiorello by Ernest Cuneo, with lyrics by Sheldon Harnick, and music by Jerry Bock. It is one of only eight musicals to win the Pulitzer Prize for Drama."

Five Course Love
"...tells the story of five entangled encounters with love in five different restaurants. Three actors play fifteen different characters, all on the hunt for one true Love."

Flahooley
"...a musical with a book by E. Y. Harburg and Fred Saidy, lyrics by Harburg, and music by Sammy Fain. The allegorical tale is set in fictional Capsulanti, USA, site of the headquarters for B.G. Bigelow, Incorporated, the largest toy corporation in the world. Puppet designer Sylvester has created laughing doll Flahooley and is about to unveil it as the company's big Christmas release."

Flora, the Red Menace (OBC) & (1987 Off-Broadway Revival)
"...musical with a book by George Abbott and Robert Russell, music by John Kander, and lyrics by Fred Ebb. The musical starred Liza Minnelli in the title role in her Broadway debut, for which she won a Tony Award for Best Actress in a Musical. This was the first collaboration between Kander and Ebb, who later wrote Broadway and Hollywood hits such as Cabaret and Chicago."

Flower Drum Song (OBC)  & (2002 Broadway Revival)
"..the eighth stage musical by the team of Richard Rodgers and Oscar Hammerstein II. It was based on the 1957 novel, The Flower Drum Song, by Chinese-American author C. Y. Lee. The piece opened in 1958 on Broadway."

Follies (OBC)  &  (1985 Concert Cast) & (1998 Paper Mill Playhouse Revival) &  (2011 Broadway Revival)
"..a musical with music and lyrics by Stephen Sondheim and a book by James Goldman. The story concerns a reunion in a crumbling Broadway theatre, scheduled for demolition, of the past performers of the Weismann's Follies, a musical revue (based on the Ziegfeld Follies), that played in that theatre between the World Wars. It focuses on two couples, Buddy and Sally Durant Plummer and Benjamin and Phyllis Rogers Stone, who are attending the reunion."

42nd Street (OBC) & (2001 Broadway Revival)
"...a musical with a book by Michael Stewart and Mark Bramble, lyrics by Al Dubin, and music by Harry Warren. Based on the novel by Bradford Ropes and the subsequent 1933 film adaptation, it focuses on the efforts of famed dictatorial Great White Way director Julian Marsh to mount a successful stage production of a musical extravaganza at the height of the Great Depression."

Frozen
"...a musical with music and lyrics by Kristen Anderson-Lopez and Robert Lopez, and book by Jennifer Lee, based on the 2013 film of the same name. The story centers on the relationship between two sisters who are princesses."

The Full Monty
"...a musical with a book by Terrence McNally and score by David Yazbek. In this Americanized musical stage version adapted from the 1997 British film of the same name, six unemployed Buffalo steelworkers, low on both cash and prospects, decide to present a strip act at a local club after seeing their wives' enthusiasm for a touring company of Chippendales. One of them, Jerry, declares that their show will be better than the Chippendales dancers because they'll go 'the full monty' — strip all the way. As they prepare for the show, working through their fears, self-consciousness, and anxieties, they overcome their inner demons and find strength in their camaraderie."

Fun Home
"..is a musical adapted by Lisa Kron and Jeanine Tesori from Alison Bechdel's 2006 graphic memoir of the same name. The story concerns Bechdel's discovery of her own sexuality, her relationship with her gay father, and her attempts to unlock the mysteries surrounding his life. It is the first Broadway musical with a lesbian protagonist. It is told in a series of non-linear vignettes connected by narration provided by the adult Alison character."

Funny Girl (OBC) & (2016 London Revival)
"...a musical with a book by Isobel Lennart, music by Jule Styne, and lyrics by Bob Merrill. The semi-biographical plot is based on the life and career of Broadway, film star and comedienne Fanny Brice and her stormy relationship with entrepreneur and gambler Nicky Arnstein."

A Funny Thing Happened on the Way to the Forum (OBC) & (1996 Broadway Revival)
"...a musical with music and lyrics by Stephen Sondheim and book by Burt Shevelove and Larry Gelbart. Inspired by the farces of the ancient Roman playwright Plautus (251–183 BC), specifically Pseudolus, Miles Gloriosus and Mostellaria, the musical tells the bawdy story of a slave named Pseudolus and his attempts to win his freedom by helping his young master woo the girl next door. " 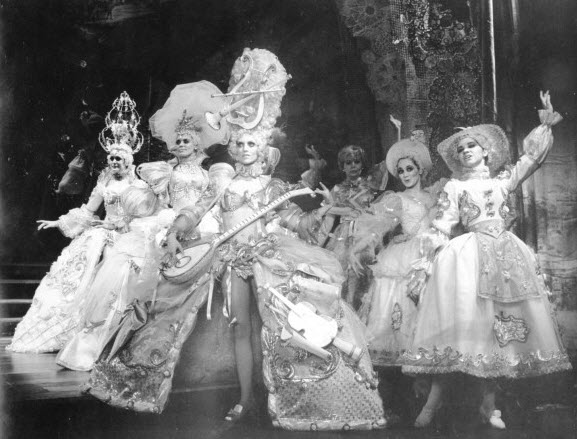