Kean
"...a musical with a book by Peter Stone and music and lyrics by Robert Wright and George Forrest. Using material by Jean-Paul Sartre and Alexandre Dumas, père as its source, it centers on the adventures of Edmund Kean, considered the greatest Shakespearean actor of the 18th century, focusing primarily mainly on his wild behavior offstage. Trouble ensues as Kean desperately tries to juggle the two women in his life - the Danish Ambassador's wife, Elena, and a young aspiring actress, Anna."

The King and I (OBC) & (1996 Broadway Revival) & (2015 Broadway Revival)
"...a stage musical, the fifth by the team of Richard Rodgers and Oscar Hammerstein II. The work is based on the 1944 novel Anna and the King of Siam by Margaret Landon and derives from the memoirs of Anna Leonowens, who became governess to the children of King Mongkut of Siam in the early 1860s. The story deals with the experiences of the British schoolteacher, who is hired as part of the King's drive to modernize his country. The relationship between the King and Anna is marked by conflict through much of the play, as well as by a love that neither is able to express."

Kinky Boots
"...a musical with music and lyrics by Cyndi Lauper and a book by Harvey Fierstein. Based on the 2005 film Kinky Boots, which was inspired by a true story, the musical tells of a struggling British shoe factory's young, straitlaced owner, Charlie, who forms an unlikely partnership with Lola, a drag queen, to save the business. Charlie develops a plan to produce custom transvestite footwear for drag artists, rather than the men's dress shoes that his firm is known for, and in the process, he and Lola discover that they are not so different after all..."

Kismet (OBC) & (1965 Music Theater of Lincoln Center) & (1991 Studio Recording)
"...a musical with lyrics and musical adaptation (as well as some original music) by Robert Wright and George Forrest, adapted from the music of Alexander Borodin, and a book by Charles Lederer and Luther Davis, based on Kismet, the 1911 play by Edward Knoblock. The story concerns a wily poet who talks his way out of trouble several times; meanwhile, his beautiful daughter meets and falls in love with the young Caliph."

Kiss Me, Kate (OBC) & (1958 Televison Production) & (1999 Broadway Revival)
"...a musical with music and lyrics by Cole Porter. It is structured as a play within a play, where the interior play is a musical version of William Shakespeare's The Taming of the Shrew."

The Kiss of the Spider Woman (OBC) & (1994 Vanessa Williams recording)
"...a musical with music by John Kander and Fred Ebb, with the book by Terrence McNally. It is based on the Manuel Puig novel El Beso de la Mujer Araña."

Kwamina
"...a musical which originally debuted on Broadway on October 23, 1961 at the 54th Street Theatre, and ran for 32 performances, ending on November 18, 1961. It starred Sally Ann Howes, Terry Carter, Robert Guillaume, and Brock Peters among others and was written by Richard Adler and choreographed by Agnes de Mille."

Lady Be Good (1992 Studio Cast)
"..a .musical written by Guy Bolton and Fred Thompson with music by George and lyrics by Ira Gershwin.  The musical involves a brother and his sister who are out of money and each eager to sacrifice him- or herself to help the other. This was the first Broadway collaboration of the Gershwin brothers."

The Last Five Years
"..a one-act musical written by Jason Robert Brown. The story explores a five-year relationship between Jamie Wellerstein, a rising novelist, and Cathy Hyatt, a struggling actress. The show uses a form of storytelling in which Cathy's story is told in reverse chronological order (beginning the show at the end of the marriage), and Jamie's is told in chronological order (starting just after the couple have first met). The characters do not directly interact except for a wedding song in the middle as their timelines intersect."

The Last Ship
"...is an original musical with music and lyrics by Sting and a book by John Logan and Brian Yorkey. Inspired by Sting's own childhood experiences and the shipbuilding industry in Wallsend."

Legally Blonde
"...a musical with music and lyrics by Laurence O'Keefe and Nell Benjamin and book by Heather Hach. The story is based on the novel Legally Blonde by Amanda Brown and the 2001 film of the same name. It tells the story of Elle Woods, a sorority girl who enrolls at Harvard Law School to win back her ex-boyfriend Warner. She discovers how her knowledge of the law can help others, and successfully defends exercise queen Brooke Wyndham in a murder trial."

Legs Diamond
"...a musical with a book by Harvey Fierstein and Charles Suppon based on the Warner Brothers film The Rise and Fall of Legs Diamond (screenplay by Joseph Landon). The music and lyrics are by Peter Allen. The show follows the travails of its title character, a depression-era mobster who wants to break into show business."

Let 'Em Eat Cake (1987 Studio Cast)
"...a Broadway musical that opened October 21, 1933 at the Imperial Theatre, New York, USA and ran for 89 performances. It had music by George Gershwin, lyrics by Ira Gershwin, and book by George S. Kaufman and Morrie Ryskind.  Although it was the sequel to Of Thee I Sing, and had the same producer, writers, and stars, the tone of Let 'Em Eat Cake was much darker and the issues more complex - Wintergreen is defeated for reelection, and he and Throttlebottom form an incipient Fascist movement to take over the government."

Let It Ride
"...a Broadway musical based on the 1935 Broadway farce Three Men on a Horse by George Abbott. The musical, with book by Abram S. Ginnes and music and lyrics by Jay Livingston and Ray Evans, opened in New York at the Eugene O'Neill Theater on October 12, 1961."

Lingoland
"...not your garden variety revue, but more of a patchwork quilt pieced together from the songs, poems and musings of Kenward Elmslie."

The Light in the Piazza
"...a musical with a book by Craig Lucas and music and lyrics by Adam Guettel. Based on a novella by Elizabeth Spencer, it is set in Florence and Rome in the summer of 1953. A young American tourist, Clara Johnson, meets and falls for young Italian Fabrizio Naccarelli. When Clara's mother Margaret learns of the affair, she opposes it for reasons that only gradually become clear to the audience.The score breaks from the more recent tradition of pop music on Broadway by moving into the territory of Neoromantic classical music and opera, with unexpected harmonic shifts and extended melodic structures, and is more heavily orchestrated than most Broadway scores. Many of the lyrics are in Italian or broken English, as many of the characters are fluent only in Italian."

Li'l Abner
"...a musical with a book by Norman Panama and Melvin Frank, music by Gene De Paul, and lyrics by Johnny Mercer. Based on the comic strip Li'l Abner by Al Capp, the show is, on the surface, a broad spoof of hillbillies but is also a pointed satire taking on any number of topics, ranging from an incompetent United States federal government to standards of masculinity."

The Lion King
"...a musical based on the 1994 Disney animated film of the same name with music by Elton John and lyrics by Tim Rice along with the musical score created by Hans Zimmer with choral arrangements by Lebo M. Directed by Julie Taymor, the musical features actors in animal costumes as well as giant, hollow puppets."

Little Mary Sunshine
"...a musical that parodies old-fashioned operettas and musicals. The book, music, and lyrics are by Rick Besoyan

Little Me (OBC) &  (1998 Broadway Revival)
"...a musical written by Neil Simon, with music by Cy Coleman and lyrics by Carolyn Leigh. The original Broadway production was memorable with Sid Caesar in multiple roles with multiple stage accents playing all of the heroine's husbands and lovers."

Little Mermaid
"...a stage musical produced by Disney Theatrical, based on the animated 1989 Disney film of the same name and the classic story of The Little Mermaid by Hans Christian Andersen. The musical's book is by Doug Wright, music by Alan Menken and lyrics by the late Howard Ashman (written for the film) and new lyrics by Glenn Slater."

A Little Night Music (OBC) & (1975 London Cast) & (2009 Broadway Revival)
"...a musical with music and lyrics by Stephen Sondheim and book by Hugh Wheeler. Inspired by the Ingmar Bergman film Smiles of a Summer Night, it involves the romantic lives of several couples."

Little Shop of Horrors
"...a rock musical, by composer Alan Menken and writer Howard Ashman, about a hapless florist shop worker who raises a plant that feeds on human blood. The musical is based on the low-budget 1960 black comedy film The Little Shop of Horrors, directed by Roger Corman."

Little Women
"..a musical with a book by Allan Knee, lyrics by Mindi Dickstein, and music by Jason Howland. Based on Louisa May Alcott's classic 1869 semi-autobiographical novel, it focuses on the four March sisters - brassy, tomboy-like, aspiring writer Jo, romantic Meg, pretentious Amy, and kind-hearted Beth - and their beloved Marmee, at home in Concord, Massachusetts while the family patriarch is away serving as a Union Army chaplain during the Civil War. Intercut with the vignettes in which their lives unfold are several recreations of the melodramatic short stories Jo writes in her attic studio."

Look Ma, I'm Dancin'!
"...is .about a wealthy woman who sponsors the tour of a ballet company so that she can dance in it. The woman was played by comedienne Nancy Walker, and the show boasted such theater talents as director George Abbott and choreographer Jerome Robbins. The score was by Hugh Martin."

Lorelei
" ...a musical with a book by Kenny Solms and Gail Parent, lyrics by Betty Comden and Adolph Green, and music by Jule Styne. It is a revision of the Joseph Fields-Anita Loos book for the 1949 production Gentlemen Prefer Blondes and includes many of the Jule Styne-Leo Robin songs written for the original."

Lost in the Stars (OBC) & (1992 Studio Cast)
"...a musical with book and lyrics by Maxwell Anderson and music by Kurt Weill, based on the novel Cry, The Beloved Country (1948) by Alan Paton. The musical premiered on Broadway in 1949; it was the composer's last work for the stage before he died the following year."

Louisiana Purchase (1996 Broadway Revival)
"... a musical theater production from 1940. It has music and lyrics by Irving Berlin and book by Morrie Ryskind based on a story by B. G. DeSylva. In 1941.Set in New Orleans, the musical satirizes the more questionable features of the career of Governor Huey Long and his control over Louisiana politics."

Lysistrata Jones
"...a musical comedy adaptation of Aristophanes' comedy Lysistrata. The book is by Douglas Carter Beane and the score is by Lewis Flinn. After a critically acclaimed off-Broadway run with Transport Group Theatre Company,the show opened on Broadway in December 2011 and closed in January 2012. The show tells the tale of the men on a losing college basketball team whose cheerleader girlfriends refuse to have sex with them until they win a game..." 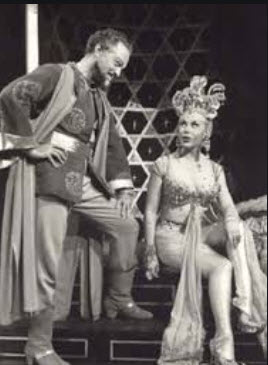