The Art and Science of Great Teaching: Celebrating the Legacy of William Vennard

A one-day symposium made possible by a USC Libraries Dean’s Challenge Grant and cosponsored by the Thornton School of Music. 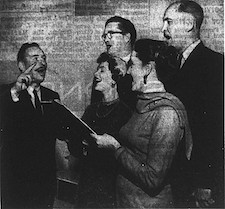 (b Normal, IL, Jan 31, 1909; d Los Angeles, Jan 10, 1971). American singer and voice science researcher. He studied English at Taylor University, Upland, IN (AB 1930) and music at Northwestern University, Evanston, IL (BM 1941) and at the American Conservatory, Chicago (MM 1943). After teaching at the Chicago Evangelistic Institute, DePaul University and the American Conservatory, he became a member of the faculty of music at the University of Southern California (1946), chairing its voice department (1950–71). Among the associations to which he belonged are the National Association of Teachers of Singing, which he served in several capacities, including national president. He was awarded an honorary doctorate from Pepperdine University College, Malibu, CA in recognition of his outstanding contributions to singing and the science of singing (1970).

As a singer, Vennard was active in opera, oratorio and solo song; as a teacher of singing, his students, among them Marilyn Horne, achieved worldwide success. His renowned text, Singing, the Mechanism and the Technique, is a constant resource for teachers and researchers alike. Vennard’s collaboration with Janwillen van den Berg resulted in his film Voice Production: the Vibrating Larynx. Winning several awards, including best medical research film from a festival in Prague in 1960, it shows the anatomy and physiology of voice production in the excised larynx. He was a pioneer in the science of singing and in voice pedagogy and was instrumental in fostering collaborative efforts between singers, physicists, psychologists and voice scientists.