What Makes a Monster?: Satellite Exhibitions at the USC Libraries

The new exhibition What Makes a Monster? explores how human have long found wonder in the strange and macabre, from mythical creatures to the real world freak show artists, microscopic pathogens, and monstrous criminals.

What Makes a Monster? Satellite Displays 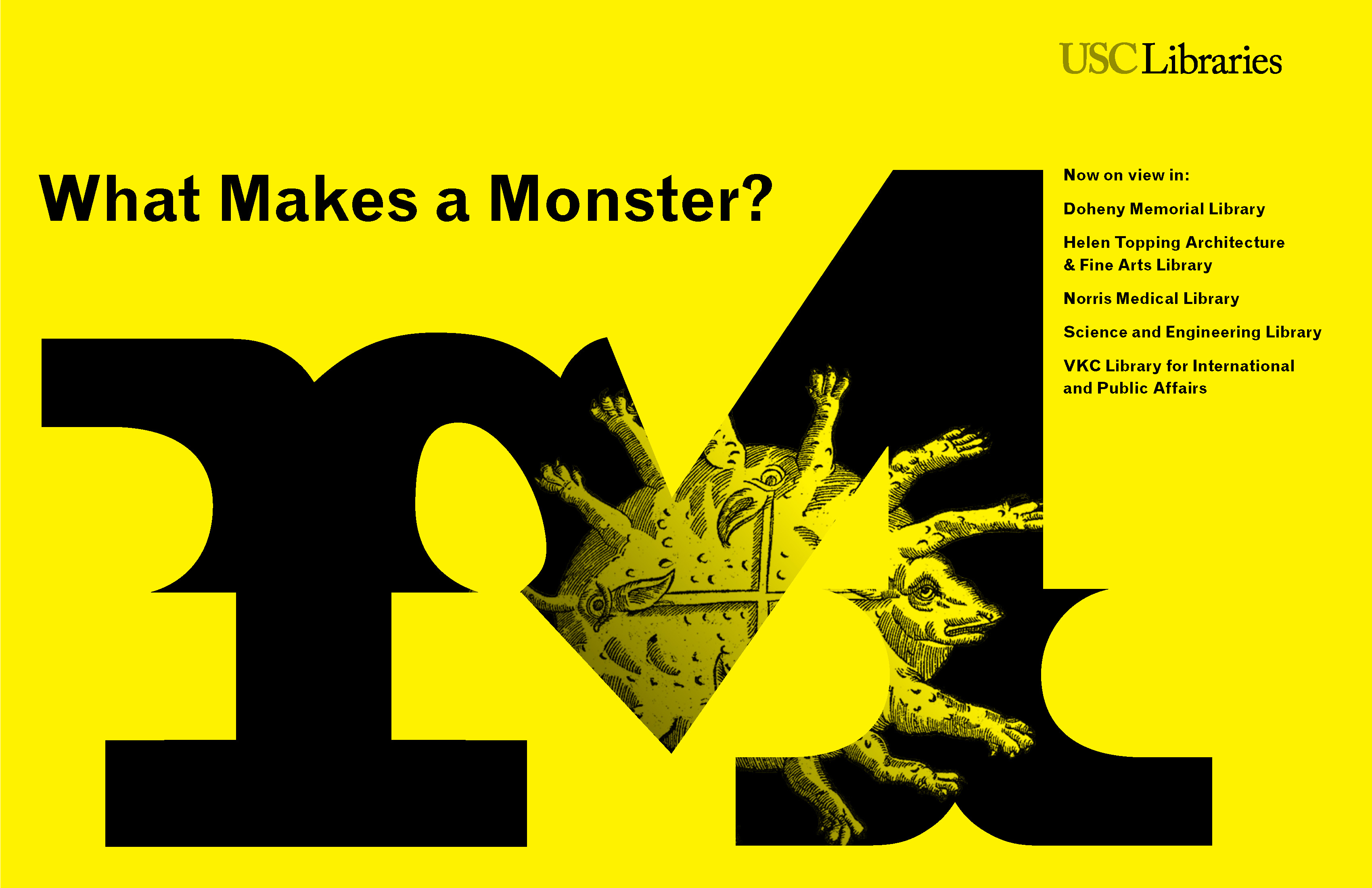 Exhibition items on display include materials from the USC Libraries Special Collections, ONE National Gay & Lesbian Archives and the USC Cinema Library

Over the centuries, artists around the world have incorporated monstrous imagery inspired by religion, folklore, myths, legends, and their imaginations. Thanks to technical advances in the field, Renaissance painters such as Hieronymous Bosch, DiericBouts, Pieter Breugel, and Caravaggio were able to create realistic scenes out of the most hellish of visions.

Influenced by the Romantic Movement of the late 1700s–early 1800s, artists like Caspar David Friedrich, Henry Fuseli, and Francisco Goya—and later, Max Ernst—explored the boundary between light and dark, life and death, dreams and wakefulness. Artists today such as Douglas Gordon, Wangechi Mutu, and USC’s own Charlie White continue to work within our collective fascination with demons, internal and external.

“The Nightmare” and “The Three Witches” by Henry Fuseli, from Dark Romanticism: From Goya to Max Ernst (Ostfildern: Hatje Cantz, 2012)

“Night Scene with Witches” by Francisco Goya, from Witches: Exploring the Iconography of the Sorceress and the Enchantress (Florence: Centro Di, 2005)

Throughout most of medical history, people with unexplainable pathologies (whether real or imagined) have been called monsters. Here we explore various physiological and psychological conditions deemed “monstrous” in the past and how over time physicians grew to have a greater understanding and acceptance of human variation.

The unfortunate woman seen here suffers from pemphigus foliaceus, an autoimmune disease in which the epidermis and mucous membranes are attacked, causing disfiguring blisters and scaly lesions. This book was one of the first to use photography to show the horrifying effects of dermatological diseases.

A wide variety of conditions, both real and fanciful, are juxtaposed in this early pathology work. The original 1665 publication includes a number of depictions of imaginary creatures—such as a pig with a human head and an animal with human legs coming out of its rear end, with the author speculating that these creatures were the product of bestiality. However, it also illustrates a number of obscure real world conditions like conjoined twins, as shown in this 1937 French translation.

The early modern era was rife with superstitions and saw a number of publications featuring “monstrous” creatures. Rüff’s work even placed them in specific regions—the bovine-human hybrid on the left was said to come from Saxony. Another creature has a human body but the head of an elephant.

Not all so-called monsters were feared. The 8’ 2” giant Hugo, pictured here at the age of 25, was the object of great fascination at the Paris Exhibition of 1900 and other contemporary events. Launois suspected the cause of Hugo’s gigantism was a pituitary disorder called acromegaly.

These images and case study descriptions describe what was then-called “cretinism,” a condition characterized by exceptionally small stature coupled with developmental disabilities (now known to be caused by congenital hypothyroidism). The doctor uses what we would now deem entirely inappropriate language to describe the patient and her father, “a somewhat squat ugly Irishman.”

As doctors studied pathology and disease they came to understand how infectious diseases could lead to monstrous disfigurement of patients. These colored illustrations show the effects of chickenpox and smallpox, two scarring diseases now effectively managed or eradicated, thanks to modern vaccination.

Throughout history sufferers of leprosy (also called Hansen’s Disease, named after the author of this work) were routinely shunned by society due to the disfiguring effects of the disease and the fear of contagion. Antibiotics first introduced in the 1940s, and reinforced in the 1980s, have largely controlled outbreaks, although leper colonies still exist in many parts of the developing world.

Here we see syphilitic lip chancres both in the illustration and in a three-dimensional wax moulage. Moulages were sculptures made predominantly in the nineteenth century to mimic dermatologic conditions for medical teaching purposes. Here a contemporary artist has created a wax moulage after the style of its nineteenth-century predecessors.

Babies born with congenital syphilis, if they survived, often grew to be severely disfigured and mentally challenged as they aged, like the patient shown here. Over decades the infection can damage the brain, causing dementia and altered behavior among other symptoms, a condition known as neurosyphilis.

The Physiognomy of Mental Diseases by Sir Alexander Morison (London, 1843)

Physiognomy was the pseudoscience that held one’s character could be determined through facial expressions. This book shows faces in the throes of various kinds of mental distress (such as nymphomania and melancholy) along with the faces of “cured” patients. Here we see a 47-year-old man prone to violent mania and an accompanying image reproduced from a later page of the same man “in his sane state.” The man allegedly had already killed one person in a manic rage.

In this pseudoscientific attempt to predict criminal behavior, Ellis offers nonsensical charts like the one displayed, claiming to show how parental age affects whether your child will be a murderer, sex offender, thief, or generally insane. Around the turn of the twentieth century numerous half-baked scientific disciplines attempted to predict human behavior through anatomy or other circumstances present at birth.

The Illustrated Self-instructor in Phrenology and Physiology by Orson Fowler and Lorenzo Fowler (New York: Fowlers and Wells, 1855) and replica phrenological bust

Phrenology, a pseudoscientific attempt to judge one’s personality by the shape of the skull, enjoyed nearly one hundred years of popularity before being discredited in the twentieth century. This book includes a personal reading by Orson Fowler, one of the best-known phrenologists of all time. He described the book’s owner, one J. S. Wilcox, as a “man of talents” who ought “to study all the natural sciences.” This bust shows the different areas of the skull and the traits that corresponded with its prominent or recessive parts.

Phrenology, in Connexion with the Study of Physiognomy by Johann Gaspar Spurzheim (London: Treuttel, Wurtz, and Richter, 1826)

Here phrenologist Spurzheim attempts to explain one of history’s purported monsters, the Roman Emperor Caracalla, as having “the most ignoble configurations of a head which it is possible to conceive.” He goes on to describe how the shape of the emperor’s head accurately predicted his legendary cruelty and vulgarity since “the whole tendency of his mind is towards brutal pleasures.”

These tree charts use aesthetic differences to draw clear distinctions among races. These kinds of images would later feed into the eugenicist movement that led to the atrocities of World War II, among other horrors.

Mongolism: A Study of the Physical and Mental Characteristics of Mongolian Imbeciles by Kate Brousseau (Baltimore: Williams & Wilkins, 1928)

The language used in this book appears mind-bogglingly insensitive to modern ears. It begins: “The material presented in this work is based upon personal experience with Mongolian imbeciles and other types of defectives during a period of more than ten years, and additional valuable information has been obtained from a questionnaire submitted to workers in various institutions for the feeble-minded and to physicians who have made clinical observations on Mongols.” Only recently have those with intellectual and developmental disabilities been described with sensitivity rather than ghastly terminology.

While the word monster is used liberally to describe that which humanity at large fears, misunderstands, or finds repulsive, the world of science often recognizes such things as objects of investigation, as elements of an ordered system of knowledge. Atomic power, black holes, deep-sea fishes, parasitic insects, vampire bats, and viruses may frighten—owing to appearance, effect, or both—but in the context of scientific inquiry and description, their monstrous characteristics become explainable, if no less wondrous, phenomena.

Paintings of Fate and Black Holes by Paul Laffoley, from The End is Near! Visions of Apocalypse, Millennium, and Utopia

The power of the atom on display, from Atomic: The First War of Physics and the Secret History of the Atomic Bomb: 1939–1949

Map of Lake Monsters of America, by Atlas Obscura (2013)

Liberators, 1944 by Harald Damsleth, a Norwegian who worked for the SS in occupied Norway.

Bill Berkeley, The Graves are Not Yet Full (New York: Basic Books, 2001)

Jennie E. Burnet, Genocide Lives in Us Women, Memory and Silence in Rwanda  (Madison: The University of Wisconsin Press, 2012)

Horst Faas, Requiem by the Photographers Who Died in Vietnam and Indochina (New York: Random House, 1997)

Gargantua: The Pilgrims are Eaten in Salad by Gustave Dore in The Grotesque Factor (San Agustin: Museo Picasso Malaga, 2002)

"The trouble, my friends, with socialism is that it would destroy initiative" Puck, volume 66, January, 1910

Film still from Night of the Living Dead (1968)

Promotional brochure for Night of the Living Dead (1968)

Promotional brochure for The Wolfman (1941)

Script for The Bride of Frankenstein (1934)

Ambar Past, Portable Mayan altar with hex books in Tzotzil and English, 2007

Pictorial History of the American Circus (1957)

Reginald Scot, The Discoverie of Witchcraft

“The Divine Insect,” from The Extermination of Evil (1927 facsimile of a 12th century scroll)

ONE National Gay & Lesbian Archives at the USC Libraries

Those who argue homosexuality has “destructive physical, emotional, and spiritual consequences have long demonized the LGBTQ community. The mid-20th Century medicalization of homosexuality and the salacious nature of the cover art for some pulp fiction, conspired to produce negative imagery and stereotypes, which literally demonized lesbians, transgendered people and gays.  This particular volume is an egregious example of that unfortunate trend, which would now be considered reprehensible