Other Web Sources of Interest

This guide is intended to help people find the Scripter Award winning fillms (as well as each year's runners-up) available in the Leavey Library on DVD. Films are listed in chronological order by the year which they were awarded

"Established in 1988, the USC Libraries Scripter Award is an honor bestowed annually by the Friends of the USC Libraries in recognition of the best adaptation of the printed word into film, and is given to both the author and screenwriter. By honoring the literary artistry and collaborative process of turning a book into a screenplay and ultimately into a film, this unique award acknowledges the full spectrum of the writers' creative process.

Foreign-language releases are not eligible for the USC Libraries Scripter Award. Eligible works are reviewed by a committee comprised of Writers Guild of America Members, Academy Award-winning and -nominated screenwriters, authors, film industry executives, faculty, and select members of the Friends of the USC Libraries. This selection committee narrows down the year's eligible films to five nominees and then chooses that year's best adaptation of the printed word into film.

Scripter supports the development of the USC Libraries’ collections and the library’s role as a place of discovery." 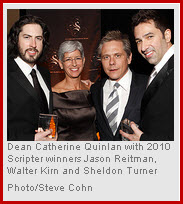