And the Show Went On: Cultural Life in Nazi-occupied Paris
"On June 14, 1940, German tanks rolled into a silent and deserted Paris. Eight days later, a humbled France accepted defeat along with foreign occupation. The only consolation was that, while the swastika now flew over Paris, the City of Light was undamaged. Soon, a peculiar kind of normality returned as theaters, opera houses, movie theaters and nightclubs reopened for business. This suited both conquerors and vanquished: the Germans wanted Parisians to be distracted, while the French could show that, culturally at least, they had not been defeated. Over the next four years, the artistic life of Paris flourished with as much verve as in peacetime. Only a handful of writers and intellectuals asked if this was an appropriate response to the horrors of a world war. Alan Riding introduces us to a panoply of writers, painters, composers, actors and dancers who kept working throughout the occupation. Maurice Chevalier and Édith Piaf sang before French and German audiences. Pablo Picasso, whose art was officially banned, continued to paint in his Left Bank apartment. More than two hundred new French films were made, including Marcel Carné’s classic, Les Enfants du paradis. Thousands of books were published by authors as different as the virulent anti-Semite Céline and the anti-Nazis Albert Camus and Jean-Paul Sartre. Meanwhile, as Jewish performers and creators were being forced to flee or, as was Irène Némirovsky, deported to death camps, a small number of artists and intellectuals joined the resistance..."

Antigone
"Jean Anouilh, one of the foremost French playwrights of the twentieth century, replaced the mundane realist works of the previous era with his innovative dramas, which exploit fantasy, tragic passion, scenic poetry and cosmic leaps in time and space. Antigone, his best-known play, was performed in 1944 in Nazi-controlled Paris and provoked fierce controversy. In his allegorical tale, Antigone defies the tyrant Creon and is sent to her death. Antigone conveyed to Anouilh's compatriots a covert message of heroic resistance to Nazi occupation; but the author's characterisation of Creon also seemed to exonerate Marshal Petain and his fellow collaborators. More ambivalent than his ancient model, Sophocles, Anouilh uses Greek myth to explore the disturbing moral dilemmas of our times."

Antigone on the Contemporary World Stage
"...is the first book to analyse what happens to Sophocles' play as it is adapted and (re)produced around the world, and the first to focus specifically on Antigone in performance. The essays, by an international gathering of noted scholars from a wide range of disciplines, highlight the numerous ways in which social, political, historical, and cultural contexts transform the material, how artists and audiences in diverse societies including Argentina,The Congo, Finland, Haiti, India, Japan, and the United States interact with it, and the variety of issues it has been used to address."

Jean Anouilh, Life, Work, and Criticism
" A biography of the great French playwright and an analysis of his major works."

Paris in the Third Reich: A History of the German Occupation, 1940-1944
"Depicts the German occupation of Paris during World War II from the perspectives of both the defeated Parisians and the victorius Germans, accompanied by more than one hundred contemporary photographs."

Twentieth-century French Dramatists
"This award-winning multi-volume series is dedicated to making literature and its creators better understood and more accessible to students and interested readers, while satisfying the standards of librarians, teachers and scholars. Dictionary of Literary Biography provides reliable information in an easily comprehensible format, while placing writers in the larger perspective of literary history."

The World of Jean Anouilh
"The high comedy of Jean Anouilh has found a large and enthusiastic public over the past few years both in England and the United States. Oddly. despite critical and popular acclaim. there has been no full-length treatment of Anouilh in English since 1953, when his audiences outside France were small. This present work is the only comprehensive examination of this brilliant dramatist and his art which has been addressed to his new audiences in this country. Mr. Pronko's aim has been to write a self-contained introduction to Anouilh for the non-specialist. Avoiding critical pronouncements, he presents all of the plays of Anouilh in the form of interpretation and summary. His discussion of the playwright's chief dramatic ideas and of his purposes and development is not only admirably thorough and direct, but also makes lively reading..." 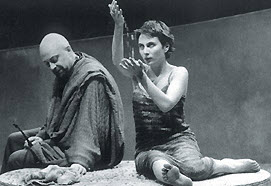