1968: A Year of War, Turmoil & Beyond
"In January 1968, a surprise attack by the North Vietnamese, known as the Tet Offensive, convinced many Americans that the war was not going to end very soon. Large scale opposition flared against the Johnson administration and its policies. Federal troops put down race riots while bitter protests erupted on campuses in the USA. In Paris that May, there was a 'social revolution'. In Germany, a student movement driven by Rudi Dutschke reached fever pitch. The optimistic 'Prague Spring' provided fuel for the Soviet invasion later in the year. Two extraordinary champions for change, Martin Luther King Jr. and Senator Robert F. Kennedy, were both brutally assassinated. The Mexico Olympics provided a big moment for 1968 with Tommie Smith and John Carlos’ black gloved fists at the ceremonies.."

The Assassination of John F. Kennedy
"By 22 November 1963, the date of his assassination, President Kennedy had made many enemies. He had declared war on the Mafia, racial prejudice and the industrial/military interest in Vietnam. He had humiliated Khrushchev and Castro, who both wanted revenge over the Cuban Missile Crisis. To this day, conjecture surrounds the ballistics evidence and whether multiple assassins were involved. New film material from Washington has just been released"

Cuban Missile Crisis: Three Men Go to War
"Explore the inside story of the Cuban Missile Crisis in October 1962, when the world teetered on the brink of nuclear holocaust. In the first major feature documentary on the subject, the film brings to life the three central characters—Kennedy, Castro and Khrushchev—and explores how the world's most powerful men fell into an abyss of their own making and outlines the courage and luck it took to climb out again."

Marching to Freedom Land
"The 1960s bring new progress in the quest for freedom, but this is also an explosive decade that threatens to tear apart the fabric of society. President Kennedy is assassinated, and Lyndon B. Johnson pursues the war in Vietnam. Martin Luther King, Jr. is assassinated, leaving behind an impressive and growing legacy of non-violent civil rights resistance."

A Nation Torn
"Examine the foreign policies of Presidents Kennedy and Johnson during the turbulent decade of the 1960s. Explore how young Americans demanded social change in the 1960s in a nation that was divided in so many ways."

Restless Society
"Watch an overview of the anxiety in the 1960s about America's position in the world. Recognize growing pressure from African Americans and other minorities during this period and the abject poverty that shaped the U.S. political and social climate.:" 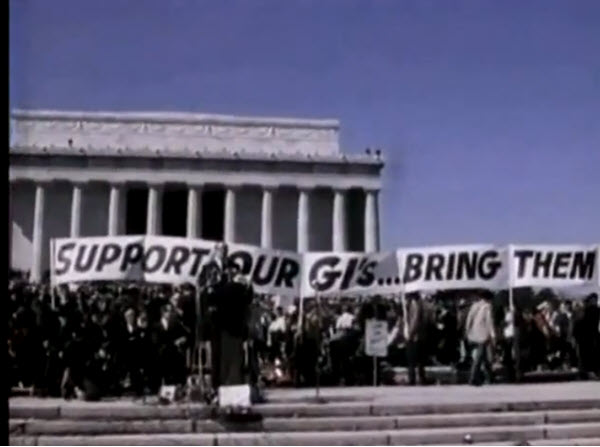