The Doomsday Flu
"In 1918, in the course of 120 terrifying days, a harmless disease mutated into the Spanish Flu. Striking quickly, the disease could fell a person in minutes, with overwhelming fatigue, raging fever, and lungs that hemorrhaged and filled with pus. This disease killed 22 million people around the world, wiping out 21,000 Americans in the last week of October alone. This episode of History Undercover traces the course of this horrible disease that scientists theorize, would have wiped out all mankind in months if it had maintained its rate of acceleration."

The Great War: "Drawing on unpublished diaries, memoirs and letters, The Great War tells the rich and complex story of World War I through the voices of nurses, journalists, aviators and the American troops who came to be known as “doughboys.” The series explores the experiences of African-American and Latino soldiers, suffragists, Native American “code talkers” and others whose participation in the war to “make the world safe for democracy” has been largely forgotten. The Great War explores how a brilliant PR man bolstered support for the war in a country hesitant to put lives on the line for a foreign conflict; how President Woodrow Wilson steered the nation through years of neutrality, only to reluctantly lead America into the bloodiest conflict the world had ever seen, thereby transforming the United States into a dominant player on the international stage; and how the ardent patriotism and determination to support America’s crusade for liberty abroad led to one of the most oppressive crackdowns on civil liberties at home in U.S. history. It is a story of heroism and sacrifice that would ultimately claim 15 million lives and profoundly change the world forever."

Safe for Democracy?
"With help from the Wright brothers' introduction of the airplane, the country begins to soar. Woodrow Wilson and America reluctantly join the fight in World War I, while on the home front, women at last get the right to vote. The twenties roar with new levels of personal freedom. "

To End All Wars?
"American troops entered World War I when it seemed the Allies could not hold out against the Germans any longer. Trace the steps that led to the end of World War I and secured the position of the United States as a world leader."

The Road to War
"In 1914, long-standing tensions in Europe erupted into the largest war the world had seen. Realize that while major nations competed for overseas empires and built military alliances, Americans remained neutral and experienced a business boom."

World War I: On the Home Front
"While the doughboys were fighting the war “over there,” Americans at home were busy supporting it. This program looks at the domestic issues facing the United States during its involvement in World War I. Included are discussions of the changing industrial workforce, the growth of the women’s suffrage movement, African-American migration to the North and the racial tensions that followed, erosion of American civil liberties during the war, Wilson’s idealistic Fourteen Points, and the punitive Treaty of Versailles." 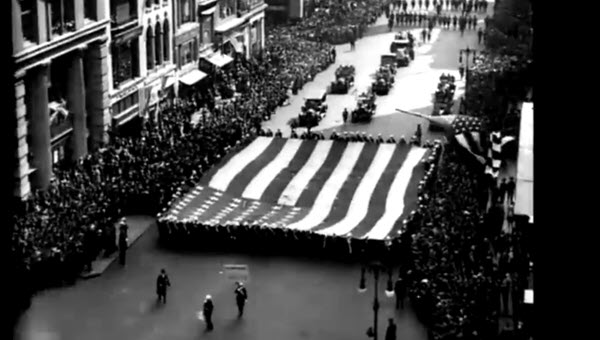