The Age of the City
"During the late 1800s and early 1900s, cities became magnets that drew people and ideas and created new lifestyles. Examine how city life evolved as immigrants and migrants moved to city centers to find work, but also found crowded, unhealthy conditions."

The American Industrial Revolution
"What forces led the United States away from its agrarian roots, transforming it into a nation dependent on mechanized farming, heavy industry, and large corporations? This program helps identify answers as it examines the Industrial Revolution in the latter half of the 19th century. Viewers learn about the establishment of the transcontinental railroad and its role in industrial growth, including the rise of the steel industry led by Andrew Carnegie. The emergence of John D. Rockefeller’s oil empire as a major economic driver is also highlighted. Further subjects include the great inventors, such as George Eastman, Alexander Graham Bell, and Thomas Edison; westward expansion and the Homestead Act of 1862; the waves of immigration that occurred after 1870; and environmental issues that developed in the wake of American industrialization. A viewable/printable teacher’s guide is available online."

Andrew Carnegie and the Age of Steel
"This film celebrates steel, the metal that built modern America—from small, early ironworks in colonial Massachusetts to massive mills in Pittsburgh. Viewers learn about Andrew Carnegie’s opportunism, timing, and business talent that led him to enter the post-Civil War iron industry. He soon adopted the Bessemer process to supply steel to buildings and railroads across the nation during the Gilded Age—becoming the richest man in America. J.P. Morgan convinced him to merge with eleven other steel companies to create U.S. Steel, headquartered in Gary, Indiana and provide materials to automobile and wartime manufacturers...."

The Gilded Age
"..resents a compelling and complex story of one of the most convulsive and transformative eras in American history. In the closing decades of the nineteenth century, the U.S. population doubled in the span of a single generation, national wealth expanded, and two classes rose simultaneously, separated by a gulf of experience and circumstance that was unprecedented in American life."

Modern Marvels: The Railroads That Tamed the West
"The Transcontinental Railroad was completed in 1869. Modern Marvels explores how the U.S. harnessed the awesome potential of the railroad to tame the West and link America’s coasts."

A New Corporate Order
"Tremendous industrial growth in the United States after the Civil War changed the country from a nation of farmers to an industrial power. Consider how this profound, rapid growth incited the nation's workforce to call for better working conditions."

New York, 1865-1898: Sunshine and Shadow
"In this episode of New York: A Documentary Film, Ric Burns turns to the period when greed and wealth fueled an expanding metropolis, even as politics and poverty defined it. Now the spotlight shines on the growth, glamour, and grief of New York during America's giddy postwar “Gilded Age.” Exploring the incomparable wealth of the robber barons and the unabashed corruption of political leaders, such as Tammany Hall boss William M. Tweed, the episode examines the era when the expansion of wealth and poverty—and the schism between them—built to a crescendo...."

Political Stalemate
"Weigh the effects of political stalemate in the late 19th century. Discover that as government grew it became the livelihood for many professional politicians and the two major political parties faced close elections that tipped the balance of power."

The Rise of Capitalism
"Individual enterprise merges with technological innovation to launch the Commercial Revolution -- the seedbed of American industry. The program features the ideas of Adam Smith, the efforts of entrepreneurs in New England and Chicago, the Lowell Mills Experiment, and the engineering feats involved in Chicago's early transformation from marsh to metropolis."

Worlds Apart
"A wealthy class, which developed out of industrial success, changed the social order in the United States and led to the emergence of a new middle class. Contrast social life in different regions of the country during the 19th century."

Yearning to Breathe Free
"The newly unveiled Statue of Liberty is a symbol of all that is best in America, inspiring a time of reform and compassion. Mother Jones brings the child labor issue to the forefront of the nation's consciousness, and Jane Addams, America's first social worker, creates Hull House. Ida Tarbell exposes the abuses of John D. Rockefeller's Standard Oil Company. " 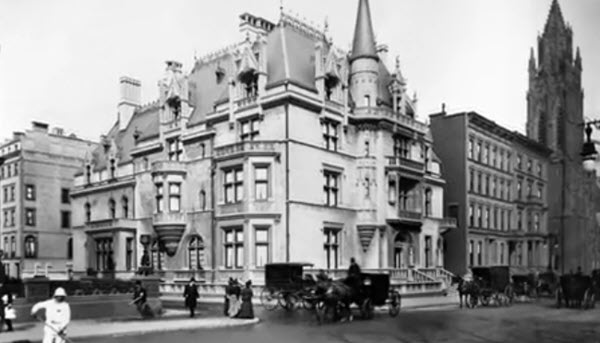