Aftershock: Beyond The Civil War
"The aftermath of the War Between the States was for many as terrible as the hostility itself. This riveting film presents the unvarnished story of the traumatic Reconstruction period. Slavery was not wiped out by the Civil War, only driven underground. The post-war chaos was a breeding ground for opportunists from criminal to political. Surviving the Civil War was just the beginning of a terrible time of suffering. The Civil War was only half the battle. When General Robert E. Lee signed the terms of surrender in Wilmer McLean's home in Appomattox, Virginia, it marked the end of a terrible period of conflict that nearly destroyed this young country. But it also marked the beginning of a period of recovery that was in many ways as painful as the war itself."

Alexander Gardner, War Photographer/ John Brown's War
"Matthew Brady received a lot of credit for the sporadic, yet powerful, images of the American Civil War, but Alexander Gardner was just as influential in an era where photographers had no standards to rely on."

Battle Cry
"Southern and northern goals were very different during the Civil War. Review the main features of the war, from the role of the American West to the principle generals from each side. Learn about the battle at Antietam and the Emancipation Proclamation."

Civil War
"The War Between the States rages. In 1863, the Confederate Army seems poised for victory. Following the bloody battle of Antietam, President Lincoln issues the Emancipation Proclamation. Former slaves join the Union army in droves. With superior transportation (railroads), communication (telegraph lines), and battlefield technology, the Union prevails and America is on track to become a global superpower"

The Civil War
"As the Civil War rages, all eyes turn to Vicksburg, where limited war becomes total war. Professor Miller looks at the ferocity of the fighting, at Lincoln's Emancipation Proclamation, and at the bitter legacy of the battle -- and the war."

The Civil War: Episode 1-The Cause (1861)
"Beginning with a searing indictment of slavery, this program dramatically evokes the causes of the war. Here are the burning questions of union and states’ rights, John Brown at Harper’s Ferry, the election of Abraham Lincoln, the firing on Fort Sumter, and the jubilant rush to arms on both sides. Along the way the war’s major figures are introduced: Abraham Lincoln, Frederick Douglass, Robert E. Lee, Ulysses S. Grant, and a host of lesser-known but equally vivid characters. The episode comes to a climax with the disastrous Union defeat at Manassas, where both sides learned it would be a very long war."

The Civil War: Episode 2-A Very Bloody Affair (1862)
"The year 1862 saw the birth of modern warfare and the transformation of Lincoln’s war to preserve the Union into a war to emancipate the slaves. This program begins with the political infighting that threatened to swamp Lincoln’s administration and then follows Union General George McClellan’s ill-fated campaign on the Virginia Peninsula and Ulysses S. Grant’s costly victory at the Battle of Shiloh. The episode ends with rumors of Europe’s readiness to recognize the Confederacy."

The Civil War: Episode 3-Forever Free (1862)
"This program charts the events that led to Lincoln’s decision to set the slaves free. Convinced by July 1862 that emancipation had become morally and militarily crucial to the future of the Union, Lincoln had to bide his time and wait for a victory to issue his proclamation. But as the year wore on, there were no Union victories to be had, thanks to the brilliance of Stonewall Jackson and Robert E. Lee. The episode comes to a climax in September 1862 with Lee’s invasion of Maryland and the bloody struggle on the banks of Antietam Creek. The emancipation of the slaves follows."

The Civil War: Episode 4-Simply Murder (1863)
"This program begins with the nightmarish Union disaster at Fredericksburg, which leads to two climaxes the following spring: at Chancellorsville in May, where Lee wins his most brilliant victory but loses Stonewall Jackson, and at Vicksburg, where Grant’s attempts to take the city by siege are stopped. Fierce Northern opposition to Lincoln’s Emancipation Proclamation is addressed, along with the increasing desperation on the Confederate home front. As the episode ends, Lee decides to invade the North again to draw Grant’s forces away from Vicksburg."

The Civil War: Episode 5-The Universe of Battle (1863)
"This program opens with an account of the turning point of war: the Battle of Gettysburg. For three days, 150,000 men fight to the death in the Pennsylvania countryside—an action that culminates in Pickett’s ill-fated charge. This extended episode then goes on to chronicle the fall of Vicksburg, the New York draft riots, the first use of African-American troops, and the battles at Chickamauga and Chattanooga. The program closes with the dedication of a new Union cemetery at Gettysburg, where Lincoln struggles to put into words what is happening to his people."

The Civil War: Episode 6-Valley of the Shadow of Death (1864)
"This program begins with a biographical comparison of Ulysses S. Grant and Robert E. Lee and then goes on to chart the extraordinary series of battles that pitted the two generals against each other. So intense was the fighting that in one 30-day period, their armies lost more men than both sides had lost in three years of war. With Grant and Lee finally deadlocked at Petersburg, this episode shifts focus to follow General Sherman’s Atlanta campaign. As the horrendous casualty lists increased, Lincoln’s chances for reelection began to dim—and with them the possibility of Union victory. Distributed by PBS Distribution."

The Civil War: Episode 7-Most Hallowed Ground
"The program begins with the presidential election of 1864 that set Abraham Lincoln against his old commanding general, George McClellan. The stakes were nothing less than the survival of the Union itself: with Grant and Sherman stalled at Petersburg and Atlanta, opinion in the North had turned strongly against the war. But 11th-hour victories at Mobile Bay, Atlanta, and the Shenandoah Valley tilted the election to Lincoln, and the Confederacy’s last hope for independence died."

The Civil War: Episode 8-War Is All Hell
"This program begins with William T. Sherman’s brilliant March to the Sea, which brought the war to the heart of Georgia and the Carolinas and spelled the end of the Confederacy. It continues with Lincoln’s second inauguration, the fall of Petersburg and then Richmond to Grant’s army, and the westward flight of Lee’s tattered Army of Northern Virginia to a tiny crossroads town called Appomattox Court House, where the dramatic and deeply moving surrender of Lee to Grant would take place. The episode ends in Washington, where John Wilkes Booth dreamed of vengeance for the South."

The Civil War: Episode 9-The Better Angels of Our Nature (1865)
"This extraordinary final episode of The Civil War begins in the bittersweet aftermath of Lee’s surrender and goes on to narrate the terrible events of five days later when, on April 14, Lincoln was assassinated. After chronicling Lincoln’s poignant funeral, the program then recounts the final days of the war, the capture of John Wilkes Booth, and the fates of the Civil War’s major protagonists. The consequences and meaning of a war that transformed America from a collection of states to the nation it is today are considered as well."

Final Stages
"The tide of the Civil War changed with a series of northern victories in 1863. Review the battles at Vicksburg, Gettysburg, and Chattanooga. Investigate Sherman's 1864 march through Georgia, Grant's strategy in Virginia, and Lee's surrender at Appomattox."

House Divided
"The election of Abraham Lincoln in 1860 spawned the secession of seven southern states. Trace the early events and issues of the Civil War, including the attack on Fort Sumter, the mobilization of troops, and the influence of border states."

Reconstruction
"Professor Miller begins the program by evoking in word and picture the battlefield after the battle of Gettysburg. With the assassination of President Lincoln, one sad chapter of American history comes to a close. In the fatigue and cynicism of the Civil War's aftermath, Reconstructionism becomes a promise unfulfilled."

Reconstruction: America After the Civil War--Episode 1
"Experience the aftermath of the Civil War—a bewildering, exhilarating, and terrifying time. African-Americans who had played a crucial role in the war now grappled with the terms and implications of Reconstruction and their hard-won freedom."

Reconstruction: America After the Civil War—Episode 2
"Discover how post-Civil War America was a new world. Learn how African-Americans made political, social and economic progress in the face of violence."

Reconstruction: America After the Civil War—Episode 3
"Explore the rise of Jim Crow and the undermining of Reconstruction’s legal and political legacy."

Reconstruction: America After the Civil War—Episode 4
"See African-Americans in the 1900s using artistic expression against revisionist history and racism."

Tattered Remains
"Abuses of the system threatened Reconstruction. Compare southern successes of the time--including improvements in education, the rebuilding of families, and sharecropping--with the violence and legal barriers that subverted the rights of black citizens."

A War to End Slavery
"Heroic soldiers in blue and gray endure the bloodiest battles ever fought on American soil as the country fights a civil war over the future of slavery. Grim battles unfold: Bull Run, Antietam, and Gettysburg. Famous generals Ulysses S. Grant and Robert E. Lee lead the war between the North and the South. Lincoln speaks eloquently at Gettysburg, and just a year and a half later is brutally assassinated at Ford's Theater."

What Is Freedom?
"In the aftermath of the Civil War, Reconstruction begins as a time of great hope for the devastated South. When political turmoil continues and the Reconstruction efforts fail, a new era of segregation begins. In the Supreme Court decision of Plessy v. Ferguson, “separate but equal” becomes the law of the land."

What Price Freedom
"Lincoln's assassination brings Andrew Johnson into office, and his first acts as president hinder Reconstruction. Learn about the passage of the 14th and 15th Amendments to the Constitution, President Johnson's impeachment, and Grant's election." 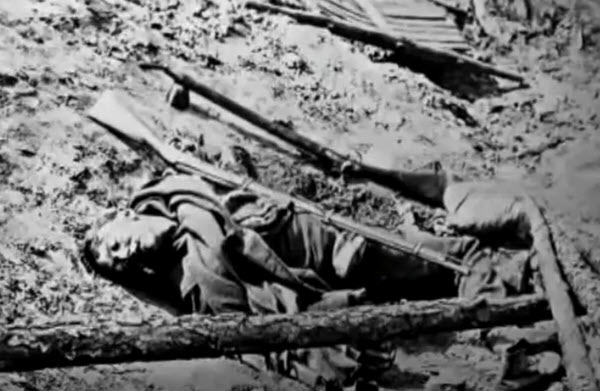