The Abolitionists: Part 1
"Shared beliefs about slavery bring together Angelina Grimké, the daughter of a Charleston plantation family, who moves north and becomes a public speaker against slavery; Frederick Douglass, a young slave who becomes hopeful when he hears about the abolitionists; William Lloyd Garrison, who founds the newspaper The Liberator, a powerful voice for the movement; Harriet Beecher Stowe, whose first trip to the South changes her life and her writing; and John Brown, who devotes his life to the cause. The abolitionist movement, however, is in disarray and increasing violence raises doubts about the efficacy of its pacifist tactics."

The Abolitionists: Part 2
"Douglass escapes slavery, eventually joining Garrison in the anti-slavery movement. Threatened with capture by his former owner, Douglass flees to England, returning to the U.S. in 1847. He launches his own anti-slavery paper. John Brown meets with Douglass, revealing his radical plan to raise an army, attack plantations and free the slaves. Harriet Beecher Stowe publishes Uncle Tom’s Cabin in 1852. A best-seller, and then wildly successful stage play, this influential novel changes the hearts and minds of millions of Americans. The divide between North and South deepens, touching off a crisis that is about to careen out of control."

The Abolitionists: Part 3
"The battle between pro-slavery and free-soil contingents rises to fever pitch. During his raid on Harpers Ferry, John Brown is captured, then executed, becoming a martyr for the cause. Abraham Lincoln is elected president in 1860. Southern states secede, war breaks out and the conflict unexpectedly drags on. On New Year’s Day 1863, it is..."

The Age of Slavery
"...illustrates how black lives changed dramatically in the aftermath of the American Revolution. For free black people, these years were a time of opportunity, but for most African Americans, the era represented a new nadir. King Cotton fueled the rapid expansion of slavery into new territories and the forcible relocation of African Americans to the Deep South. Yet as slavery intensified, so did resistance. From individual acts to mass rebellions, African Americans demonstrated their determination to undermine and ultimately eradicate slavery."

The Coming of the Civil War
"Simmering regional differences ignite an all-out crisis in the 1850s. Professor Martin teams with Professor Miller and historian Stephen Ambrose to chart the succession of incidents, from "Bloody Kansas" to the shots on Fort Sumter, that inflame the conflict between North and South to the point of civil war."

Decade of Discord
"Sectional tensions over slavery characterize the years leading up to the Civil War. Learn the results of the Compromise of 1850 and the raid on Harper's Ferry. Delve into political party changes, the Lincoln-Douglas debates, and the election of 1860."

A Fatal Contradiction
"The Declaration of Independence stated “all men are created equal,” but the nation’s slaves were a glaring exception. The colonial slave trade and brutal life for African-Americans on Southern plantations spark the abolition movement and the Underground Railroad. This episode explores the role of Frederick Douglass, and then looks at the impact of the Lincoln-Douglas debates on the westward expansion of slavery. It ends with Abraham Lincoln's election to the presidency."

Master and Slave
"Investigates the institution of slavery in the American South by examining daily life for these forced laborers, who, in spite of hardships, helped develop a rich culture that resonates in our society today."

The Reform Impulse
"The Industrial Revolution has its dark side, and the tumultuous events of the period touch off intense and often thrilling reform movements. Professor Masur presents the ideas and characters behind the Great Awakening, the abolitionist movement, the women's movement, and a powerful wave of religious fervor."

Revolution of a Different Sort
"The first half of the 19th century ushered in a growth in population and a surge in transportation and technology known as the Industrial Revolution. Uncover events related to rising immigration and the emerging factory system in the United States."

Seeds of Destruction
"The South saw its greatest expansion of slavery as the North adopted laws to abolish it. The abolitionist movement began to gather strength, contributing to the widening fissure and imminent break-up of the nation."

Slavery
"While the North develops an industrial economy and culture, the South develops a slave culture and economy, and the great rift between the regions becomes unbreachable. Professor Masur looks at the human side of the history of the mid-1800s by sketching a portrait of the lives of slave and master."

Voices of Reform
"Many reform movements emerged from the Second Great Awakening, ranging from temperance to women's suffrage to abolitionism. Take a closer look at the emergence of romanticism in literature and art as well as the experiments of utopian societies." 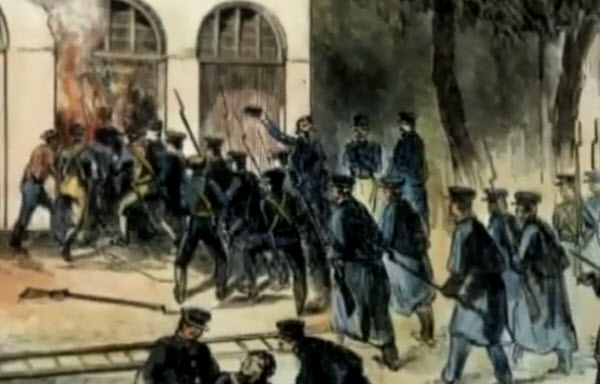