Death Runs Riot
"The United States had envisioned an orderly expansion into the West: treaties were supposed to legitimize settlement; surveys were to map the land; then Americans would spread peacefully across it -- all under the guidance and protection of their government. But the California Gold Rush and the war with Mexico changed everything. Americans were now moving west in ever-larger numbers, ahead of their government -- searching for new treasure, clearing land, building towns and cities, starting over. But the new settlers brought with them their nation's oldest, and most divisive issue -- slavery -- and the West became a breeding ground for the bloodshed that would eventually engulf the whole country..."

Empire Upon the Trails
"By 1821, no one knew who would control the West’s seemingly infinite spaces, what language would be dominant, whose god would be worshipped -- what the West's destiny would be. Two young republics -- the United States and the newly established Republic of Mexico -- claimed most of it. England still had outposts in the Pacific Northwest, while a host of Indian nations held fast to their lands -- and challenged each other for more. But Americans were already moving west, content -- at first -- to make their way in other people's worlds. But regardless of their reasons for going West, once they got there, the Americans soon determined to make the West -- all of it -- their own."

Fight No More Forever
"By 1874, railroads had brought millions of new settlers to the West and the federal government began consolidating its control over the region as never before. Washington mounted still another assault on the Mormons, forcing their prophet to choose between saving his church or sacrificing a spiritual son. Meanwhile, the American army pressed its campaign against the Indians, forcing most tribes onto reservations where they were dependent on government rations that often did not arrive, and on the whims of government agents who often did not care. But a few bands still held out, determined to live as they wished in a West that was already transformed. On the plains, a Lakota medicine man, who saw the Americans as his mortal enemies, would become a symbol of this defiant spirit and win the greatest victory of the Indian wars, only to see his people shattered by an avenging nation. ..."

The Geography of Hope
"By 1877, the American conquest of the West was nearly complete. For every Indian in the West, there were now nearly 40 whites, and as the Indian wars drew to a close, the last obstacles to American domination dropped away, and the country readied itself to assert control over the entire region. Between 1877 and 1887, four and a half million more people came West. Almost half settled on the western Plains, creating new towns in a region once thought too harsh for human habitation: Bismarck and Champion, Epiphany, Wahoo and Nicodemus... ."

Ghost Dance
"This film examines how mining and industrial expansion changed the West forever, while land rushes and assimilation efforts prolonged the tragedy for Native Americans. Through primary resource materials, viewers explore the West's promise of a better life and learn about a religious movement called the Ghost Dance that swept through dispirited Indian reservations and culminated in the tragedy at Wounded Knee."

The Grandest Enterprise Under God
"It had taken the bloodshed and sacrifice of the Civil War to reunite the nation, North and South. But when the war was over, Americans set out with equal determination to unite the nation, East and West. To do it, they would build a railroad. Its completion would be one of the greatest technological achievements of the age -- signalling at last, as nothing else ever had, that the United States was not only a continental nation, but on its way to becoming a world power. And when the railroad was finally built, the pace of change would shift from the steady gait of a team of oxen, to the powerful surge of a steam locomotive. The West would be transformed. .."

The Guns That Tamed the West
"The Western frontier was a dangerous and perilous landscape where the path to survival was stained with blood and tears. As thousands of settlers flooded this untamed land they brought with them the tools of their culture, including the gun. The gun enabled man to hunt, kept his enemies at bay and ultimately it allowed him to tame the West. When a man raised his gun it was more than just a symbol of status and power, it was real power, the power of life and death."

The Indian Wars: Might Makes Right
"This program examines the friction caused by westward expansion of white settlers from the colonial period through the 19th century and the near obliteration of America's indigenous population and their culture."

The Legendary Frontier
"The lasting impression of the American West as a place for fresh beginnings and bold undertakings is a legend worth investigating in this video. Learn how the real American West experienced casualties due to quick expansion in the 19th century."

Liberty for All?
"While America was founded as a free land in which people could live out their own destinies, it came at a terrible cost to Native Americans. The Pilgrims laid the groundwork for religious freedom, while the Puritan-led Salem Witch Trials were a frightening reminder of superstition and intolerance. The nation's population migrates westward, emboldened by a new philosophy called Manifest Destiny; the Wilderness Trail leads to the Trail of Tears and then the Gold Rush. Key historical figures include Daniel Boone, Andrew Jackson, and James K. Polk"

The Meeting Ground
"Consider how millions of new settlers converging on the inhabited and uninhabited American West make it a place that will challenge peoples of different ethnic origins and cultures to live together."

One Sky Above Us
"By 1887, the West was changing faster than ever before. Americans were moved by the same impulses that had always moved them, to better their own lives and transform the region in the process. Now their numbers soared, and they brought with them the tools of the new industrial age. Mining still lured people to the West from every corner of the globe, but it was a full-scale industry now. And the cities it created seemed little different from the grimy factory towns of the east. Homesteaders and fortune-seekers still arrived, even though much of the best land had already been claimed...."

The People
"The West stretches from the Mississippi to the Pacific Ocean, from the northern plains to the Rio Grande -- more than two million square miles of the most extraordinary landscape on earth. It is a land of broad rivers and vast deserts, deep canyons and impenetrable mountains, boundless prairies and endless forests, a place where towering monoliths and boiling waters rise naturally from the earth. People have come to the West from every point of the compass.  ...."

Red Cloud
"Red Cloud, head Chief of the Oglala Lakota (Sioux), from 1868 to 1909, was one of the most capable Native American opponents the United States Army faced. He led a successful conflict in 1866–1868 known as Red Cloud's War over control of the Powder River Country in northwestern Wyoming and southern Montana. After the Treaty of Fort Laramie, he led his people in the important transition to reservation life. "

San Francisco
"The adventurous spirit of early San Francisco symbolized the character of the Old West. Isolated from the rest of the United States by great expanses of untamed land, California was deemed by most easterners as an uncharted wilderness, suitable for only the most rugged explorers. A monumental discovery of gold in the region soon transformed San Francisco, then a sleepy trading village. The lure of untold riches attracted adventurers worldwide, creating a unique melding of ideas and imagination that turned a hilly, wind swept land by the bay into one of the most influential cities of the Old West."

Speck of the Future
"By 1848, the United States claimed virtually all of the West. The Louisiana Purchase, the annexation of Texas and Oregon, and the war with Mexico had stretched the nation's boundaries all the way to the Pacific. But the West was American in name only. Few people east of the Mississippi were anxious to venture into its forbidding interior. It still seemed too distant, too mysterious, too dangerous. Then gold was discovered in California, and everything changed -- for the West, and for the country. Suddenly, gold-seekers rushed in from every corner of the globe: ..."

Steamboats West: Glory Days on the Big Muddy
"Neither the snag-studded, sand bar filled waters of the Missouri River, nor the mighty Indian tribes that lined its banks could stop the power of the mighty steamboats. Westward expansion into the vast new frontiers of the Louisiana Purchase was propelled by steam beginning in the 1830s when early trips brought soldiers, miners, homesteaders and supplies that would lead the way for the defeat of the Indians and the settlement of the West. But before that conquest was over, the steamboat would play its most valuable role saving lives at the 1876 Battle of the Little Big Horn."

The Trail of Tears
"The Cherokee, Choctaw, Creek, Chickasaw and Seminole were called the Five Civilized Tribes because of their cultural achievements and rapid adaptability to the federal government's so-called civilization program. They had inhabited the Southeastern United States for thousands of years before the white man came, but over a period of ten years, more than 60,000 of them would be forced from their homelands and relocated to Indian territory over a series of routes that would come to be known as the Trail of Tears."

Westward: America
"The drama of America’s unstoppable growth continues with wagon trains and cattle barons headed westward, confronting Native American Indians as well as the interests of the Spanish and French. Resulting increases in Westward migration and the discovery of gold and other natural resources are covered in this program, along with the rise of the steamboat and a new era of commerce and industry."

Westward Expansion
"At the dawn of the nineteenth century, the size of the United States doubles with the Louisiana Purchase. The Appalachians are no longer the barrier to American migration west; the Mississippi River becomes the country's central artery; and Jefferson's vision of an Empire of Liberty begins to take shape. American historian Stephen Ambrose joins Professors Maier and Miller in examining the consequences of the Louisiana Purchase -- for the North, the South, and the history of the country."

Whose Land Is This?
"The nation seethes with racial conflict as immigrants increasingly become targets of prejudice, and as settlers and soldiers massacre Western Indians and force them onto reservations. As European freedom-seekers continue to pour into America through Ellis Island, the Supreme Court finally rules that non-citizens are due equal protection under the law." 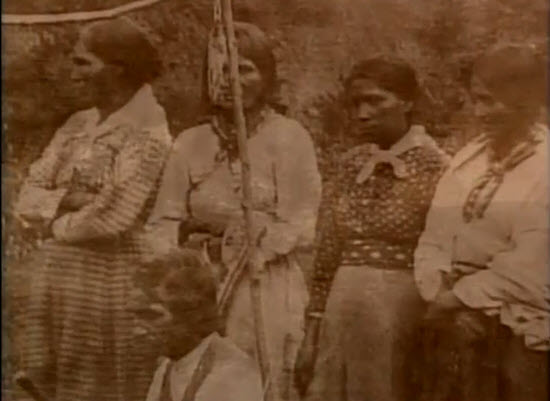