Best Laid Plans
"President Thomas Jefferson continued his efforts to minimize the national government during his second term of office. Learn about the growth of cities, the Louisiana Purchase, and the War of 1812."

First Invasion: The War of 1812
"...is a documentary produced by the History Channel which aired on September 11, 2004. The film was about the American War of 1812, when the Americans fought the British for the first time since the American Revolutionary War."

Freedom
"Colonial Americans fight together to defeat the world's most awesome military power. Then they strive to create a new kind of government that will live up to their high ideals. George Washington and Thomas Jefferson each become President; Lewis and Clark undertake their great expedition; and the American dream is born."

He Brought The People With Him
"The controversial election of 1824 gave the presidency to John Quincy Adams but set the stage for the 'Age of the Common Man,' when the country was run for the first time by a 'Washington outsider.' Learn about South Carolina's nullification crisis.."

Legacy Of An Autocratic Ruler
"Andrew Jackson's two-term presidency was marked by contradictions and controversy. Learn about his policies related to Indian removal and the national bank. Analyze political battles between the Whigs and Democrats."

The Lewis and Clark Expedition
"At stake was a vast empire beyond the Mississippi River. Fur traders had already penetrated the wilderness. Spain, France and even Russia all had a stake, but Thomas Jefferson had a continental vision for his republic. He was determined to grab the heart of the continent for the U.S. He achieved his goal with the help of Lewis and Clark."

Lewis & Clark: The Journey of the Corps of Discovery "Tells the story of the most important expedition in American history, led by Captains Meriwether Lewis and William Clark. Includes the stories of the young army men, French-Canadian boatmen, Clark's African-American slave, and the Shoshone woman named Sacagawea who went with them."

A New System of Government
"After the War for Independence, the struggle for a new system of government begins. Professor Maier looks at the creation of the Constitution of the United States. The Republic survives a series of threats to its union and the program ends with the deaths of John Adams and Thomas Jefferson on the Fourth of July, 1826."

A Precarious Experiment
"The Revolutionary War created lingering problems for American people, politics, and economy. Find out how the leaders of the new nation struggled to unite the thirteen states when the Articles of Confederation failed to support a central government."

Pressures From Within
"The War of 1812 magnified the need for a stronger national government. Explore the patterns of growth and expansion in the early 19th century. Learn about President James Monroe's 'Era of Good Feelings,' the Missouri Compromise, and the Monroe Doctrine."

Rivals and Friends
"Many factors made the contests for second and third presidents of the United States bitter battles. Learn about the presidencies of John Adams and Thomas Jefferson, the Alien and Sedition Acts, and how the Supreme Court affected both presidencies."

Thomas Jefferson
"Returning from France, Jefferson strives to preserve the fragile new U.S. government and helps create the first political party, in bitter struggles with the Federalists. He becomes vice president in 1797, and the third U.S. president in 1801. His Louisiana Purchase doubles the nation's size, but he faces controversy and scandal, finally retiring to his beloved Monticello in 1809. His last years are spent founding the University of Virginia." 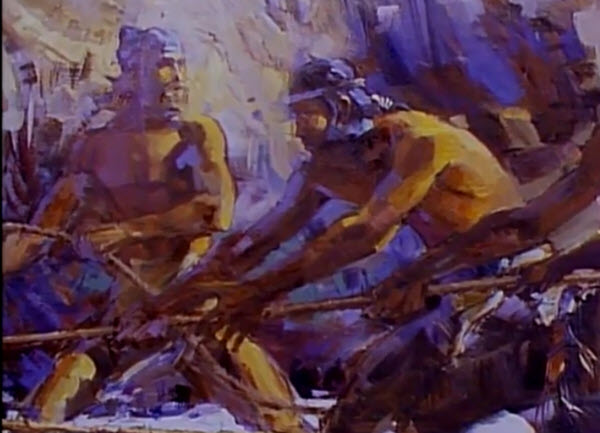 (The Lewis and Clark Expedition)