The American Revolution
"In '10 Things You Don't Know About', punk rock icon Henry Rollins uncovers crazy twists and tidbits behind the historical tales, figures, and places you only thought you knew. Whether he's analyzing centuries-old documents at the National Archives or exploring the inside of a dead gangster's speakeasy, he's on a mission to discover the info every casual history fan needs to know. The American Revolution is History 101. We all know how the Thirteen Colonies broke from the British Empire and formed the U.S. of A., but this bloody conflict brims with incredible accounts that will blow your mind."

The Coming of Independence
"Professor Maier tells the story of how the English-loving colonist transforms into the freedom-loving American rebel. The luminaries of the early days of the Republic -- Washington, Jefferson, Adams -- are featured in this program as they craft the Declaration of -- and wage the War for -- Independence."

The Declaration of Independence
""...We hold these truths to be self-evident, that all men are created equal, that they are endowed by their Creator with certain unalienable Rights, that among these are Life, Liberty and the pursuit of Happiness..." These words grace The Declaration of Independence, written in 1776, which remain as true today as when it was conceived. It is critical for American citizens to understand their importance in defining our freedoms and the foundation of democracy. .."

The Founding Fathers
"In 10 Things You Don't Know About, punk rock icon Henry Rollins uncovers crazy twists and tidbits behind the historical tales, figures, and places you only thought you knew. Whether he's analyzing centuries-old documents at the National Archives or exploring the inside of a dead gangster's speakeasy, he's on a mission to discover the info every casual history fan needs to know. You can find images of the Founding Fathers pretty much anywhere--monuments, paintings, even your money. But Henry Rollins is about to take your preconceived notions of these titans and turn them on their ear."

Independence
"The episode begins by examining how the terrorist attack of September 11, 2001, sparked a renewed focus on freedom. The program then takes us back to the summer of 1776. The thirteen colonies stake everything on an armed struggle for freedom and the chance to build a new kind of nation. Beginning with a look at the decision to declare independence, the film explores the escalating conflict with Great Britain, including the Boston Tea Party and Paul Revere's famous midnight ride. America's founding fathers such as George Washington, Samuel Adams, and Thomas Jefferson—along with other well-known historical figures, including Abigail Adams and Tom Paine—all play roles in the fight for liberty."

Liberty! Episode 1-The Reluctant Revolutionaries (1763-1774)
"In 1763, the capital city of America was London, George Washington was lobbying for a post in the British army, and no one thought of Boston harbor when they heard talk of tea parties. Yet in a dozen years, the colonies were on the brink of open rebellion."

Liberty! Episode 2-Blows Must Decide (1774-1776)
"A total break from Great Britain remained hard for many Americans to imagine, even after shots were fired at Lexington and Concord. In the end, words did much to help push matters over the edge—like Thomas Paine’s pamphlet Common Sense and the imperishable Declaration of Independence."

Liberty! Episode 3-The Times That Try Men's Souls (1776-1777)
"Days after the Declaration of Independence was signed, a British force arrived in New York harbor. This classic program focuses on the early part of the Revolutionary War, in which General Washington and his troops were driven out of New York and then New Jersey—only to slip back into New Jersey and achieve a pivotal morale-boosting victory against enemy forces in a surprise attack on Trenton. "

Liberty! Episode 4-Oh, Fatal Ambition (1777-1778)
"Despite American victories at Trenton and Princeton, the Continental Army remained in dire need of funds and military support. Congress therefore dispatched Benjamin Franklin to France in hopes of creating an alliance that would provide both. This classic program follows Franklin to Europe while also tracking the Crown forces on their march on New England. The upshot? A crushing British defeat at Saratoga and an agreement by France to fight on the American side."

Liberty! Episode 5-The World Turned Upside Down (1778-1783)
"In a strategic shift of military operations to America’s southern colonies, the British hoped to exploit the issue of slavery and to enlist the support of the area’s loyalists. This classic program examines the failure of England’s plans as early victories at Savannah and Charleston were undone by strong American resistance."\

Liberty! Episode 6-Are We to Be a Nation? (1783-1788)
"Peace finally came to the United States, but governing the world’s newest republic was no simple task. Congress was ineffectual, and individual states acted like sovereign nations. How could such a country survive? This classic program considers the post-Revolution years, during which America hammered out the Constitution and began the immense task of becoming a country in more than just name."

The Making of the Constitution
"This is a compelling account of the events leading up to the creation of the Constitution. Conforming to civics and history curriculums, the program puts key events into historical perspective by examining the pressures faced by Loyalists, Patriots, and average colonists. Richly textured with historical art, compelling video footage, and insightful commentary, it explores a fascinating mix of individuals, political philosophers, and social issues of the day. Dramatized sections provide insights into what actually went on at Independence Hall while the document was being written."

Not Much of a War
"The Americans declared independence from Britain in 1775, resulting in the Revolutionary War. Examine the battle strategies, defeats, and victories in the battle for independence."

Revolution: America—The Story of Us
"The first sparks of rebellion against the British Crown, the Declaration of Independence, and the unfolding drama of the American Revolution are examined in this program. Taking on the might of the Empire is no small task, and on numerous occasions the Continental army hovers near defeat. But new allies and battlefield tactics turn the tide, and Washington’s eventual triumph paves the way for a new nation."

Vision For a Nation
"Delegates met in Philadelphia in 1787 to form the United States government. Investigate the controversies related to the structure of Congress, slavery, and debates between Federalists and Anti-federalists. Examine issues related to the first presidency." 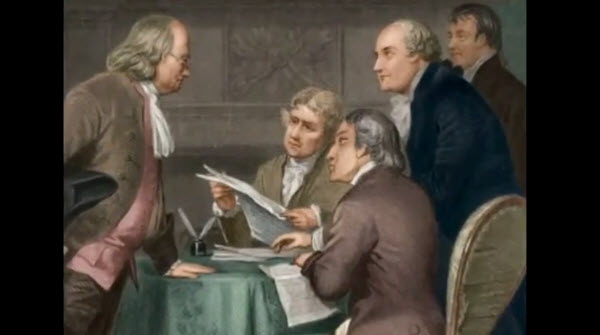