Cure for Love
"There’s a bride, a groom, and the usual happy crowd of well-wishers. But this is no ordinary wedding. Ana and Brian are ex-gays—adherents to a controversial evangelical movement that purports to convert gay people into heterosexuals. Cure for Love goes inside the unusual Christian subculture and follows the lives of several young people whose homosexuality is at odds with their religious beliefs, using their moving testimonies to fashion a nuanced critique of 21st-century fundamentalism. Jonathan, a soft-spoken young Texan, was driven into an ex-gay 'ministry”'by crippling self-loathing—but he now embraces a Christianity that leaves room for a loving gay relationship. Darren, another refugee, looks back at the ex-gay experience with mixed feelings and wry humor. Ana and Brian remain within the flock, carving out a progressive Canadian position within the movement."

One Nation Under God
"Imagine: beauty makeovers for butch lesbians; tackle football for gay men; electroshock orgasmic reorientation... These and other funny, bizarre, and often terrifying methods have been used for decades to "cure" gays and lesbians of their homosexuality. This film takes us into the strange world of 'ex-gay' ministries and "conversion" therapies, revealing shocking techniques used to "straighten" out all those "twisted" souls. At the center of the film are two former leaders of one of the biggest ex-gay ministries, who just happen to fall in love." 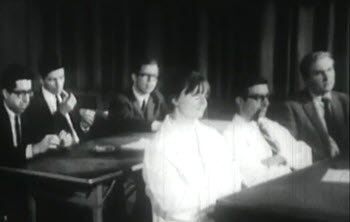 (ONE NATION UNDER GOD)