Born to Be (Kanopy)
"...follows the work of Dr. Jess Ting (he/him) at the groundbreaking Mount Sinai Center for Transgender Medicine and Surgery. There, for the first time ever in New York City, transgender and gender non-binary people have access to quality gender-affirming care. With extraordinary access, this remarkable documentary offers an intimate look at how one doctor's work impacts the lives of his patients as well as how his journey from renowned plastic surgeon to pioneering gender-affirming specialist has led to his own transformation."

A Boy Named Sue: A Female-to-Male Transition Story (Kanopy)
"This compelling documentary chronicles the transformation of an individual named Theo from a woman to a man over the course of six years. The film successfully captures Theo's physiological and psychological changes during the process, as well as their effects on his lesbian lover and community of close friends."

No Dumb Question: Uncle Bill Becomes Aunt Barbara (Kanopy)
"...is a lighthearted and poignant documentary that profiles three sisters, ages 6, 9, and 11, struggling to understand why and how their Uncle Bill is becoming a woman...."

Shinjuku Boys: Tales of Transgender Men in Japan (Kanopy)
"This film introduces three onnabes who work as hosts at the New Marilyn Club in Tokyo. Onnabes are women who live as men and have girlfriends, although they don't usually identify as lesbians. As the film follows them at home and on the job, all three talk frankly to the camera about their gender-bending lives, revealing their views about women, sex, transvestitism and lesbianism." 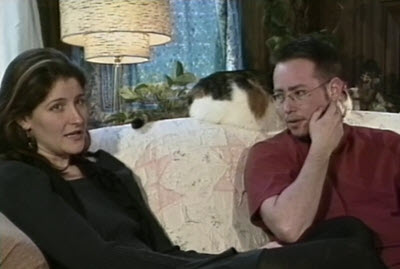