The Choice of Love
"..is a narrative documentary where the filmmaker enters the topics of Islam and homosexuality. Through meetings with the first openly gay Muslim in Norway, Kaltham Alexander Lie, the leader of the Islamic Union of Oslo, Basim Ghozlan and an anonymous interview with a gay Muslim, the director tries to understand what it means to live without the freedom and to love whoever you want to love."

Fish out of Water
"What does the Bible really say about being gay? Inspired by the experience of coming out as a lesbian to her sorority sisters during her senior year at Vanderbilt, filmmaker Ky Dickens explores the Biblical passages used to condemn homosexuality in this informative, entertaining documentary. Interweaving whimsical animation with enlightening interviews from within the lesbian and gay community as well as with theologians from across the country, Fish Out of Water breaks down seven key passages from the Old and New Testaments – from Adam and Eve to Sodom and Gomorrah and the Purity Codes – while confronting the debate over translation and historical context that affect today’s interpretations of the Bible. This is essential viewing for anyone seeking a deeper understanding of this contentious issue, or who is engaged in the dialogue about faith, homosexuality, and same-sex marriage."

For the Bible Tells Me So
"Does God really condemn loving homosexual relationships? Is the chasm separating Christianity from gays and lesbians too wide to cross? Is the Bible an excuse to hate? These questions and more are answered in this award-winning documentary, which brilliantly reconciles homosexuality and Biblical scripture – and reveals that religious anti-gay bias is based almost solely upon a misinterpretation of the Bible. Please preview prior to using this video as it contains subject matter which may not be appropriate for all audiences."

Homosexuality: A Religious Perspective
"Throughout history, homosexuality has been censured by some of the world’s major religions—and often punished to the severest degree. This program studies the scriptures and doctrines of Christianity, Judaism, and Islam to understand why, and then contrasts their stances with those of Hinduism, Sikhism, and the Rome of Hadrian. A compassionate and compelling discussion of gay marriage and child adoption by gay couples involving the Reverend Richard Kirker, of the Lesbian and Gay Christian Movement; Rabbi Chaim Rapoport; and others is featured. Genetic predisposition toward homosexuality is considered, and homosexual acts in the animal world, as they relate to scripture, are addressed. Contains mature themes and explicit language and imagery."

Queers in the Kingdom: Let Your Light Shine!
"...traces the legacy of historical evangelical Christianity through the rise of the secular university and the struggles of the Christian college to remain relevant. This documentary exposes evangelical Christian culture in the U.S. as the underlying force that legalizes Bible-based homophobia. Nowhere is this more evident than in the 200+ well established Christian Colleges where LGBT students must remain closeted and celibate or risk being expelled and condemned as sinners. "

Seventh-Gay Adventists
"...follows three gay and lesbian individuals and their partners as they attempt to reconcile their Adventist identity with their sexuality. They express their struggles with coming out in a strongly religious community and recount their failed attempts to 'become straight' before coming to terms with their homosexuality. David tried for five years to change his orientation, eventually leaving the Adventist church and finding a non-denominational church with his new partner Colin. Marcos is fired from his position as church minister after cheating on his wife with another man. He eventually finds and begins attending Second Wind, a new church. When Second Wind closes for financial reasons, Marcos seizes the opportunity to become a pastor once again and starts his own church. Sherri and Jill continue to belong to a Seventh-day Adventist church, despite receiving mixed reactions from its members. When their current pastor leaves, they are unsure how the replacement will treat them. Seventh-Gay Adventists carefully reveals the lives of three same-sex couples and the continued importance of the Christian faith." 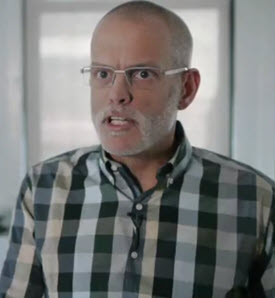 (QUEERS IN THE KINGDOM)