Ask Not: Don't Ask, Don't Tell  (Kanopy)
"Discharged soldier Alex Nicholson was the only named plaintiff in the federal lawsuit that sparked national attention and pushed the U.S. government toward a speedy decision to repeal 'don't ask, don't tell.' this film  traces Alex's story from his South Carolina beginnings to the pioneering national activism that made him a key figure in this fight. The film also includes the gripping video diaries of a gay soldier stationed in Iraq and informative interviews with policy experts, which compellingly illustrate both the political and historical context of the policy as well as the psychological tolls on gay Americans who served in combat under a veil of secrecy."

The Strange History of Don't Ask Don't Tell
'Suspenseful, deeply engaging and heart-wrenching, The Strange History of Don’t Ask, Don’t Tell illustrates the tumultuous evolution of a controversial policy which fostered hate and intolerance within the military – and undermined the very freedoms American soldiers fight for – by forcing gay and lesbian soldiers to lie and live in secrecy. In 1993, President Bill Clinton, trying to deliver on his election promise of lifting the ban on gays in the military, encountered vehement opposition that resulted in the compromise legislation, known as 'Don’t Ask, Don’t Tell.' This 80-minute documentary examines the torturous consequences of the policy and the fight to repeal it – a battle that would last 17 years, span three presidencies, and result in the discharge of 13,368 active service members. Shot during the final 15 months of the law prior to its repeal, the film includes archival news footage and interviews with over 70 key players, from policy experts to Pentagon personnel, as well as personal accounts by a number of actively serving gay soldiers (who are obscured from the camera’s view, as speaking about their sexual orientation would be in violation of Don't Ask, Don’t Tell) 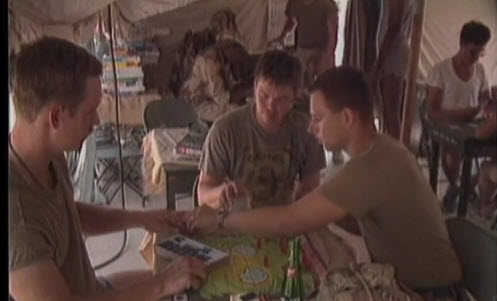