Choosing Children: Launching the Lesbian Baby Boom  (Kanopy)
"Hailed as a pioneering achievement when it was first released in 1984, Choosing Children dramatically challenged the assumption that being lesbian means you can't be a mom. Six lesbian-headed families make decisions about how to become pregnant, navigate the process of adoption, whether to involve men in parenting, and address reactions from relatives, doctors and schoolmates. In so doing, they helped redefine what "family" means and opened the door for everyone to consider parenting, regardless of sexual orientation."

Conceiving Family: Stories of Gay and Lesbian Adoption
"Following filmmaker Amy Bohigian and her partner as they adopt 15-month-old twins, this program highlights the legal, social, and personal difficulties that accompany the rewards of parenthood when gays and lesbians start families through adoption. Required to live with the twins’ foster parents for two weeks to help the children transition, Bohigian and the other adults are forced to work out their different attitudes towards same-sex parenting, with surprising results. Also profiled: long-term partners fighting to both be legitimized as legal parents, a birth family with second thoughts about giving their child to a same-sex couple, lesbian foster parents grappling with the return of a baby to her native community, and two men daunted by the cost of surrogacy."

Daddy and Papa (Kanopy)
"...is a one-hour documentary video that opens a candid window on the personal, cultural and political implications of gay fatherhood. From surrogacy, foster care and interracial adoption to the complexities of gay divorce and the legal battles around gay parenting,  Daddy and Papa presents a revealing look at some of the gay fathers who are breaking new ground in the ever-changing landscape of the American family."

Dads Wanted
"Parenthood is a big step for anyone irrespective of their sexual orientation. But because gay and lesbian parents have broken the traditional family mold, they have even more choices to make. How will they get a child? Who will be the designated parents? How will they define each parents' role? Will their children have a difficult time socially? We meet Leigh, a lesbian single mother, who advertises in a gay newspaper for a man to be an active co-parent. The film tracks her search and discovers what is involved when embarking on such a mission. Glen has two young boys whom he fathered for a lesbian couple. Glen and his partner share custody of the boys with the women and have developed a unique system of sharing child care. A lesbian couple, Erin and Theresa, have newly born twins after Theresa impregnated herself at home with sperm from an anonymous donor. We follow Erin's legal battle to be a guardian of the children."

A Gay Childhood
"California is one of the most liberal American states on laws concerning homosexuals. A good number of homosexual parents are bringing up one or several children. Will they be the pioneers of tomorrow's family?"

Making Grace
"Ann Krsul and Leslie Sullivan want to be mothers - together. They complement one another perfectly: Ann's analytical and worrying nature is balanced by Leslie's more instinctive and soothing demeanor. Together, they discover the process of creating a family from selecting a sperm donor, determining who will work, who will carry the baby to Lamaze classes, the baby shower, and figuring out how to explain "two mommies" to their nieces and nephews. A year later, baby Grace is born, and we experience with Ann and Leslie the challenges and joys of motherhood, including those unique to lesbians."

Mom’s Apple Pie: The Heart of the Lesbian Mother's Custody Movement
"While the beginnings of the LGBT Civil Rights movement was gaining momentum, the 1970s witnessed horrific custody battles for lesbian mothers. Mom's Apple Pie: The Heart of the Lesbian Mothers' Custody Movement revisits the early tumultuous years of the lesbian custody movement through the stories of five lesbian mothers and their four children."

Our House
"'I've spent my entire life explaining my family to people who just don't get it.' - Ry, age 17'I have a lot of my own issues like school, friends, and sports. It annoys me 'cause time after time I have to keep on talking about [having gay fathers]. It would be so much better if everybody that asked me would be in one big room and I'd tell them and after that I wouldn't have to say it once more.' - Daniel, age 13Today, there are millions of children in the United States being raised by gay and lesbian parents. These families are at the heart of debates in courtrooms, schools and places of worship around the country as Americans struggle to define family values.Our House is a groundbreaking documentary that explores what it's like to grow up with gay or lesbian parents..."

Rocking the Cradle: Gay Parenting
"Prior to the 1960s, the idea of same-sex parenting had yet to reach the consciousness of most Americans. The majority of gays and lesbians did not even consider parenting, fearing the stigma their children might face. By 2000, however, the U.S. Census Bureau indicates that a full one-third of lesbian couples and roughly a quarter of gay male couples had opted to become parents. This program captures six gay/lesbian families in their day-to-day lives. Two of these families are families by adoption, two are co-parenting families, and two are lesbian families by insemination. Man-on-the-street interviews as well as emotional testimonials from the 15 adults and 11 children featured in this film provide a range of perspectives on gay parenting."

Two: The Story of Roman and Nyro
"Combining over twelve years of footage and narrated by their twin sons, this film follows legendary songwriter Desmond Child and his lifelong partner in their journey toward parenthood. After 24 years together, the couple decided to start a family, and to put their full story on display so that other gay couples can learn what is involved and what is possible." 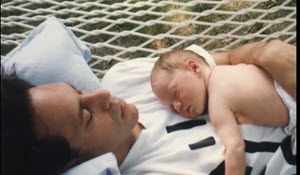