Just Married: The Epic Battle Over Gay Marriage
"The issue of gay marriage has polarized the country. This even- handed film follows events in Massachusetts after the state supreme court ruled 4 to 3 in favor of allowing same sex marriage. It is at the same time a lesson in the turbulent political process as a compelling portrait of several responsible, loving, stable couples who yearn for recognition by the state and their community to validate their families. Central to the story are Ellen Wade and Maureen Brodoff, both attorneys, who met and fell in love twenty years ago in law school. They have a fifteen year-old daughter Kate who appears to thrive. Although they have a comfortable suburban life, they feel deeply that they have been deprived of marital status and are "second-class citizens" because they are not "man and wife." The film follows Ellen and Maureen through the filing of the original lawsuit to their historic wedding, supported along the way by gay and lesbian organizations. It also treats with respect the opposition, whose deeply held convictions mobilize them to political action. By examining the political, religious and psychological arguments involved in the heated gay marriage debate, the film demonstrates just how central our concept of marriage is to us as individuals and as members of society."

Why Thee Wed? Gay Perspectives on Same-Sex Marriage
"As controversy swirls around the issue of same-sex marriage, gay and lesbian couples in North America and abroad are speaking out for the right to marry. Filmed in British Columbia after the legalization of same-sex unions, this program introduces the victorious litigants, who share their views on marriage, religious and political opposition, child adoption, and, most of all, love. Interviews with their families, the lawyer who represented them, and gay rights activist Jane Rule—who takes issue with the institution of marriage—round out the program." 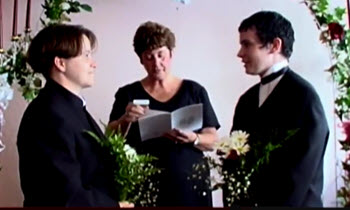