About Executing Eichmann
"On 15 December 1961 in Jerusalem, Adolf Eichmann was sentenced to death for crimes against the Jewish people and against humanity. While this judgment was met with consensus on a national level, some spoke out against it. On 29 May 1962, a group of Holocaust survivors and intellectuals, including philosophers Hannah Arendt, Hugo Bergmann, Martin Buber and Gershom Scholem, rejected an epilogue to the trial they believed was inappropriate and sent a petition to President Yitzhak Ben-Zvi to demand Eichmann's death sentence be commuted. By opposing Eichmann's execution, they raised questions about the Holocaust, and also defended the values of Judaism, raising questions about Jewish morality for Israel and the nature of a Jewish State. Historians, philosophers, and Israeli eyewitnesses set out the facts, go over the philosophical arguments,,,,,"

The German Neighbor
"Integrating impressive archive material, this film follows the steps of Adolf Eichmann's unusual life in Argentina and his remarkable defense at the trial in Jerusalem....."  (Kanopy)

The Decent One
"In 1945 a young soldier comes into the possession of a suitcase filled with private letters, documents, journals and photographs belonging to Heinrich Himmler. This film  uses these extraordinary, never-before-seen materials to access the deluded, unwavering and unnerving life and mind of the merciless "architect of the Final Solution". The film divulges the contents of letters to and from Himmler's wife, daughter and mistress, and uses archival footage of Himmler's time growing up in the 1920s with Adolf Hitler. This is a chilling insight into how the ideologies of a once lower-middle-class man turned him into a notorious war criminal."  (Kanopy)

Elusive Justice
"At the end of WWII the Allies declared the Nazi party a criminal organization, and pledged to prosecute and punish the architects and triggermen of genocide. several hundred thousand Gestapo, SS, and Wehrmacht forces had engaged in war crimes and atrocities against civilians. But only a few thousand Nazi criminals and collaborators were convicted at the Nuremberg trials. In the absence of an international manhunt and centralized prosecution, the task of bringing Nazi criminals to justice was undertaken by a handful of individuals–acting without official status or government support. These so-called Nazi hunters collectively identified and brought to justice thousands of Nazi criminals...."

Heinrich Himmler
"Born into a Bavarian bourgeois family, Heinrich Himmler became the driving force behind the indescribable crimes that made the Nazi regime so unique in modern history. An early henchman of Hitler’s, Himmler turned a small gang of thugs into a monstrous pseudo-religious order and widely feared instrument of terror—the SS. As a compliant servant to his Führer, Himmler controlled an economic empire in which hundreds of thousands of slave workers were exploited and extermination camps murdered millions."

The Hunt for Dr. Death
"In the autumn of 1941, a young Austrian doctor named Aribert Heim was assigned to the Mauthausen Concentration Camp. In just six weeks, he murdered hundreds of inmates by carrying out horrific and needless experiments. His ‘procedures’ included injecting poison directly into the hearts of his patients, often timing them to see how long it took them to die. He would amputate limbs without reason and without anaesthetic, and would even keep mementos of his victims, using skin as a lamp shade and a skull as a paperweight. He kept a detailed record in his own medical log, substantiated by testimonies from Mauthausen survivors, who knew him simply as ‘Dr Death’. Heim evaded capture and has never answered for his crimes, but now, 60 years on and with Heim well into his 90s, fresh evidence has emerged suggesting that he might still be alive. This film exclusively follows Dr Efraim Zuroff, director of the Jerusalem office of the Simon Wiesenthal Center, in his international manhunt for the world’s most-wanted Nazi war criminal. His quest takes him to Chille, Austria, Cairo and Germany. With Heim’s horrific crimes soon to be consigned to history forever, this Nazi hunt will be the last of its kind and the clock is ticking for Zuroff to bring his Number One target to justice."

Most Wanted
"As the generation of surviving Nazi war criminals dies out, two young film-makers set out on a journey to speak to these men, to enter their worlds, and uncover the impact their existence has had on others. In 1942, Sandor Kepiro allegedly took part in the massacre of 1400 Jews, Serbs and Gypsies during World War II. Now aged 94, Kepiro is the world’s most-wanted Nazi. Seventy years after the outbreak of war, Charlie Russell and Izzy Charman have gained access for the very first time to the most wanted Nazi war criminals in the world. In a series of uncomfortable but compelling encounters, they are invited into the homes of some of the last alleged collaborators of Hitler’s Third Reich...."

Nuremberg
"A few months after the end of World War II, with the international community outraged at the excesses committed by Germany, trials against war criminals were convened in Nuremberg, the symbolic seat of Nazism. There was a series of twelve trials, but it was the first that was the most prominent. Top military and governmental figures including Goering, Hess, Von Ribbentrop, and Durnitz were among those first prosecuted. Later trials followed against doctors, bankers, industrialists and others.Entirely composed of historical footage, including some newly discovered archival films, Nuremberg brings to life the challenge of administering justice when crimes are on such a scale. Fifty-five million people had been killed in World War II; seven million civilians in the Soviet Union alone. Although the first trial was concluded successfully with death or imprisonment for those found guilty, the subsequent trials were compromised by Cold War politics. The Soviet Union was now regarded as a threat by its former allies and a reconstructed Germany was to be a buffer. Many imprisoned Germans were pardoned and restored to power if they were considered useful to the West. In the end, the Cold War overturned to American commitment to justice."

Nuremberg: Tyranny on Trial
"World War II in Europe didn’t end on the battlefield; it ended in the courtroom. This A&E Special covers the Nuremberg trials, which set a new standard for atrocity: 'crimes against humanity.'"

Search for Mengele
"Josef Mengele, the 'Angel of Death,' was the most notorious SS doctor at Auschwitz. He sent hundreds of thousands of Jews to their deaths and performed appalling experiments on adults and children. After the end of World War II, Mengele was one of the world’s most wanted war criminals—yet for the next forty years he escaped justice. Narrated and co-written by world-famous TV legend David Frost, The Search for Mengele traces Mengele’s escape through Germany to Italy, then to Argentina, Paraguay and Brazil, where he finally met his end. It examines Mengele’s life through the eyes of those who knew him, revealing how the infamous Nazi doctor lived out his last years, hiding out (in perverse irony) in a multi-racial society..." 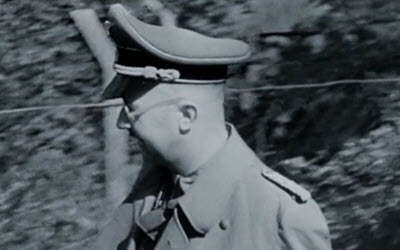