Diary from Rivesaltes, 1941-1942
"From August to October 1942, over 2250 Jews were deported from the internment camp of Rivesaltes to Auschwitz by way of Drancy. Among them were 110 children. Friedel Bohny-Reiter, a nurse with the Swiss Aid to Children, worked in this camp in the South of France."

Drancy: A Concentration Camp in Paris, 1941-1944
"..is a startling new film which examines in detail how the French authorities arrested and interned more than 74,000 Jews before sending them to Auschwitz. Only 2,500 survived. Drancy explores the structure of the Holocaust in France: how the Nazis brought the French police and gendarmerie under its control, ordering them to conduct massive round-ups of Jews in Paris and other cities; how the Vichy government instituted anti-Semitic laws, without pressure from the Germans; and how French authorities acted to divide the Jewish community, undermining resistance and streamlining the work of the Final Solution in France. Drancy includes interviews with survivors as well as with bystanders who were witnesses. Rare archival footage and photographs round out the documentary. After a 50 year silence, France is beginning to acknowledge its role in the fate of the Jews. This timely film shows why such re-examination is in order."

Poumy
"Eloquent and witty, 92-year-old Andree "Poumy" Moreuil reflects on her adventures when, as a young Jewish mother, she joined the wartime resistance in France. Images, music, family testimony and Poumy's own narrative convey the struggle as well as the mysterious exhilaration of this experience. Poumy was born in the French-German border region of Alsace. She escaped the Nazis and saved her two sons by taking refuge in a mountain village, where instead of just hiding out she joined the French Resistance. She translated, carried messages by bike and train, spied on German troop concentrations, and brought food and supplies to hungry underground fighters in the mountains. Acting against oppression helped her transcend isolation and fear. With consummate skill the filmmaker has brought Poumy's inspiring story to life. Here was a woman who refused to be a victim, but became instead a heroic fighter for her country." 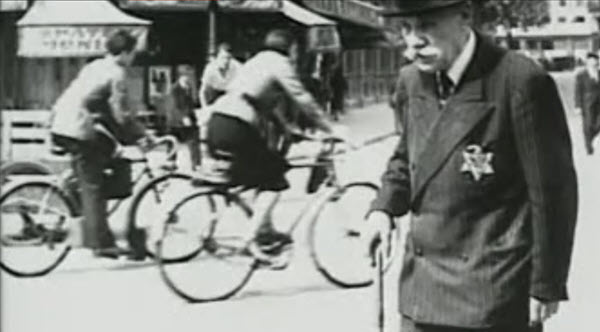