Bach in Auschwitz
"The Auschwitz Orchestra had over 40 members, all Jewish women, all escaping death in the gas chambers because of their musical ability. All were deeply traumatised, and five decades later recall their experiences.The leader of the orchestra was Alma Rose, the niece of the composer Gustav Mahler, and the daughter of a celebrated violinist, Arnold Rose, who dedicated herself to rescuing female musicians from certain death and protecting them inside the Auschwitz camp....." (Kanopy)

Blueprints of Genocide
"Documents kept in Moscow archives since World War II are providing the complete story behind the planning, engineering and building of the Auschwitz complex and its ultimate role as a machine of mass destruction. The programme provides an insight into the role played by civilian firms and their engineers and the motivation that spurred them to uphold and promote Hitler's Final Solution.

Dachau--Liberation and Retribution
"The inhuman brutality and bloodshed that was endemic at Dachau—Nazi Germany's first concentration camp—did not come to an end with its 1945 liberation, for this dreadful place proved capable of triggering a spate of vengeful retaliation not only by its half-crazed prisoners, but their rescuers as well. Chapels of various faiths, memorials, and sculptures now mark the camp's sites of execution and torture."

Dachau—State Within a State
"Dachau Camp was officially described as 'the first concentration camp for political prisoners' by Heinrich Himmler. Behind its fences, murderous SS policies, epidemics, and starvation claimed thousands of lives. This program, the first of two focusing on the Dachau camp, shows the true horrors of the Nazi regime from the infamous shower rooms to the crematorium that ran day and night disposing of human remains."

Death Camp Treblinka: Survivor Stories
"The dark heart of the Nazi holocaust, Treblinka was an extermination camp where over 800,000 Polish Jews perished from 1942. Only two men can bear final witness to its terrible crimes. Samuel Willenberg and Kalman Taigman were slave laborers who escaped in a dramatic revolt in August 1943. One would seek vengeance in the 1944 Warsaw Uprising, while the other would appear in the sensational trial of Adolf Eichmann in 1961. This film documents their amazing survivor stories and the tragic fate of their families, and offers new insights into a forgotten death camp."

Kinderblock 66; Return to Buchenwald
"After mid-1944, and the Allied landings at Normandy, World War II appeared to be nearing its bloody end. In the East, the Soviet Army offensive pushed the Nazi war machine back toward Germany's borders From the West, the US and British armies pushed through France and Belgium toward the Rhine. But even as the war's likely outcome became clearer, the Nazis continued to fight tenaciously and to carry out their effort to exterminate the Jews of Europe. During 1944, the gas chambers continued operating at Auschwitz-Birkenau until the late fall.brought to it from camps throughout the Nazi system..."

Memory of the Camps
"Fifty years ago, film crews for the Allied Expeditionary Force entered Nazi concentration camps to find atrocities beyond their imagination. Kept in a vault at London's Imperial War Museum since 1945, the film shows tragic images of the genocide including scenes of gas chambers, experimentation labs and the haunted, starving survivors. Some footage was filmed moments before the camps where liberated, as Nazi soldiers hurried to cover evidence."

Mina's Recipe Book
"In the 1940s, Mina Pachter was sent to a Nazis concentration camp in Terezin. Before dying of starvation there, she carefully recorded her favorite recipes, hoping they would somehow make it to her daughter, who had escaped to Palestine. Twenty years later, her daughter was given a handwritten book, covered in craft paper and held together by a simple piece of string. She opened it to read: 'Cakes for new mothers, Baden Caramel sweets, Quetsch strudel, Linzertorte...'"

Night and Fog
"Ten years after the liberation of the Nazi concentration camps, filmmaker Alain Resnais documented the abandoned grounds of Auschwitz. One of the first cinematic reflections on the horrors of the Holocaust,  this film contrasts the stillness of the abandoned camps' quiet, empty buildings with haunting wartime footage..."   (Kanopy)

Witness to Auschwitz
"With so few survivors of the Holocaust left to share their first-hand testimony, what is the right approach to those with accounts that cannot be proved? Ninety-three-year-old Denis Avey is a British hero of the Holocaust who helped save the life of an Auschwitz inmate. He wrote about this heroic act, verified by the man he saved, in a best-selling book. But its publication generated a heated debate. That's because Denis also claimed to have broken in to the Nazi concentration camp itself. Why would anyone do such a thing and was it even possible? Witness to Auschwitz examines the controversy surrounding this latest Holocaust account and asks why is it so important to know the truth?" 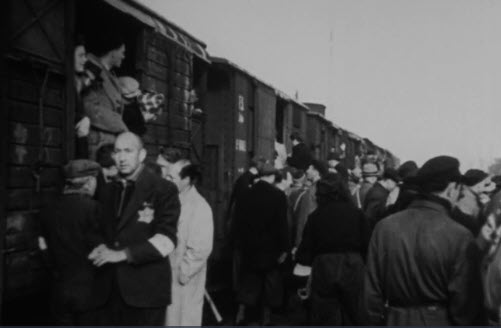