The Auctioneers: Kristallnacht 1938
"The systematic antisemitism of the Nazis peaked with the pogs of 1938-39, the outcome of which was incomparable violence and despotism towards Jewish citizens. The events that culminated into the 'Reichspogromnacht' also led to a massive wave of expropriation. The mind cannot begin to process the vast amount of monetary and material goods taken from the Jews on Kristallnacht and years to follow. But the stolen valuables were meticulously documented by a group known as the auctioneers. Their files place private stories in perspective with the major developments of Nazi Germany, showing us those who’ve profited most from the property transfers."

The House on August Street
"...is the untold story of the filmmaker's legendary aunt Beate Berger, and the Children's home she founded in 1922 in Berlin for Jewish children in need. It is the story of her courageous decision at the early 30's to save "her" children from Nazi Germany, and the unique rescue operation she initiated and carried out, taking them out of Germany and bringing them to a new 'Ahawah' home she built in Israel. It's a film about memory, hope and about a woman who understood reality around her like very few did at the time."

Night of Broken Glass
"After seizing power, the Nazis began their crusade against Jews with discriminatory laws and the looting of property; they turned to violence openly in what has come to be known as Kristallnacht: the Night of Broken Glass. In November 1938, German soldiers set on fire some 400 synagogues and destroyed 7,000 Jewish stores and businesses. More than 90 people were killed, 600 committed suicide, and over 26,000 men were deported to concentration camps...."

Surviving Hitler: A Love Story
"As a teenager in Nazi Germany, Jutta is shocked to discover she is Jewish. She joins the German resistance and meets Helmuth, an injured German soldier. The two become sweethearts and ultimately, co - conspirators in the now famous Valkyrie plot to assassinate Hitler.."

Vienna's Lost Daughters
"The exceptional story of eight women who left their native Vienna during the war as part of the Kinder Transport. Without the courage and sacrifice of their parents, these young girls would have never made it to safety. These orphaned and displaced daughters went on to remake their lives in New York, USA, finding family, optimism and hope in another part of the world, whilst never forgetting their inheritance."

We Were German Jews
"Herbert and Lotte Strauss fled Germany in 1943, escaping their near certain fate in a Nazi Concentration camp. The brave pair take us back through time, sharing the details of their trying and personal journey to the United States and the life that followed." (Kanopy) 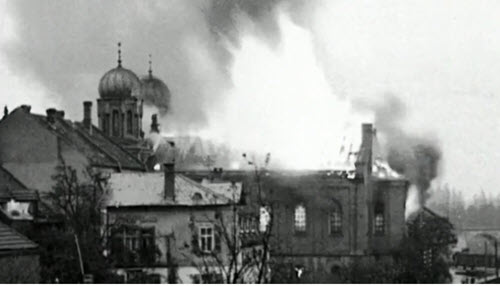