Adam Clayton Powell
"This is a compelling portrait of the legendary African American leader, Adam Clayton Powell as well as a fascinating look at the beginning of modern black politics in this country. Handsome, brilliant and controversial, he was the pastor of America's largest Protestant congregation; an early champion in the Civil Rights movement, and the first African-American Congressman from a northeastern state..."

Dr. Martin Luther King, Jr.: A Historical Perspective
"This documentary traces the life of Dr. Martin Luther King and the development of his non-violent philosophies over the course of the historic Civil Rights Movement. A political and social context drapes across the story of the African-American plight, determined to find an identity through the war at home and abroad."

Fundi: The Story of Ella Baker
"...reveals the instrumental role that Ella Baker, a friend and advisor to Martin Luther King, played in shaping the American civil rights movement. The dynamic activist was affectionately known as the Fundi, a Swahili word for a person who passes skills from one generation to another.By looking at the 1960s from the perspective of Baker, the 'godmother of the Student Nonviolent Coordinating Committee..."

Isaac Pope: The Spirit of an American Century
"This is the story of Isaac Pope - an African-American centenarian, grandson of slaves, son of sharecroppers, and unassuming WWII veteran and unsung hero of the civil rights and workers' rights movements. This film gives viewers an intimate view of 100 years of American history captured through Isaac Pope’s spellbinding storytelling. It’s the tale of his – and the nation’s – spirit, loss and love..."

John Lewis: Good Trouble
"An intimate account of legendary U.S. Representative John Lewis’ life, legacy and more than 60 years of extraordinary activism. After Lewis petitioned Dr. Martin Luther King Jr. to help integrate a segregated school in his hometown of Troy, Alabama, King sent 'the boy from Troy' a round trip bus ticket to meet with him. From that meeting onward, Lewis became one of King’s closest allies. He organized Freedom Rides that left him bloodied or jailed, and stood at the front lines in the historic marches on Washington and Selma. He never lost the spirit of the 'boy from Troy' and called on his fellow Americans to get into 'good trouble' until his passing on July 17, 2020."

Julian Bond
"This enlightening portrait joins African American social activist Julian Bond as he traces his roots back to slavery. A leader in the Civil Rights Movement, Julian Bond was among the founders of the Student Nonviolent Coordinating Committee, a leader of the 1963 March on Washington, and a Georgia legislator for twenty years. Now in his seventies, Bond recalls the experience of growing up in the segregated south, where his parents’ belief in hard work and education lifted the family out of what he describes as an apartheid system..."

The Life of Fannie Lou Hamer: Never Turn Back
"We witness the moving story of a valiant heroine of the Civil Rights struggle in Mississippi. Her courage inspired the poor and voiceless to demand the vote and to finally achieve political power. Her triumph is measured by the Black men and women who now take their rightful seats in City Halls, State Legislatures, and the U.S. Congress."

Love and Solidarity
"...is an exploration of nonviolence and organizing through the life and teachings of Rev. James Lawson. Lawson provided crucial strategic guidance while working with Martin Luther King, Jr., in southern freedom struggles and the Memphis sanitation strike of 1968. Moving to Los Angeles in 1974, Lawson continued his nonviolence organizing in multi-racial community and worker coalitions that have helped to remake the LA labor movement. Through interviews and historical documents..."

Mr. Civil Rights: Thurgood Marshall and the NACCP
"Civil rights attorney Thurgood Marshall’s triumph in the 1954 Brown v. Board of Education Supreme Court decision to desegregate America’s public schools completed the final leg of an heroic journey to end legal segregation. For 20 years, during wartime and the Depression, Marshall had traveled hundreds of thousands of miles through the Jim Crow South of the United States, fighting segregation case by case, establishing precedent after precedent, all leading up to one of the most important legal decisions in American history...."

The Pawnbroker: Whitney Young's Fight for Civil Rights
"..portrays the life of Whitney Young, once called 'the inside man of the black revolution.. As Executive Director of the National Urban League from 1961 to 1971, he helped thousands of people struggling against discrimination. Unique among black leaders, Young took the fight directly to the powerful white elite, gaining allies in business and government, but often arousing disdain from the very people he was trying to help. The Powerbroker chronicles the public and private trials of a man navigating a divided society in an explosive time>"

Rosa Parks: The Path to Freedom
"It has been only forty years since the fateful day that Mrs. Rosa Parks refused to give up her seat on the bus, yet the chain of events that she set in motion has changed the world forever. In honor of this anniversary, Kingberry Productions (which produced The Freedom Train) has compiled a biography of this dynamic but quiet woman, whose demand for her civil rights led to the social changes of the sixties..." 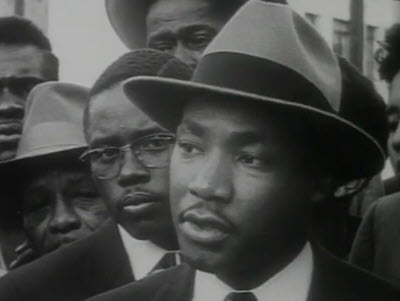