Black Is...Black Ain't
"The final film by filmmaker Marlon Riggs, Black Is...Black Ain't, jumps into the middle of explosive debates over Black identity. White Americans have always stereotyped African Americans. But the rigid definitions of 'Blackness' that African Americans impose on each other, Riggs claims, have also been devastating. Is there an essential Black identity? Is there a litmus test defining the real Black man and true Black woman?"

Black Like Who
"In this painfully honest documentary, filmmaker Debbie Reynolds explores themes of assimilation, internalized racism and self hatred. Debbie is a black student who grew up in a white neighborhood, went to white schools, had white friends, and did not think about being black. As she grew older and left home, her new friends at college noticed her inability to relate easily to other blacks. Debbie realized she had a troubling identity problem and she searched for its origins within her family. Interviewing her parents, she learns that her father's middle class aspirations led him to a tidy white suburb, safe from drugs and crime..."

A Dangerous Idea
"There is a dangerous idea that has threatened the American Dream from the very beginning. It is a strong current of biological determinism which views some groups, races and individuals as inherently superior to others and more deserving of fundamental rights. Despite the founders' assertion that 'all are created equal,' this idea was used to justify disenfranchising women, blacks and Native Americans from the earliest days of the Republic...."

Herskovitzs at the Heart of Black Identity
"Is there a politics of knowledge? Who controls what knowledge is produced and how it will be used? Is there  'objective' scholarship and, if so, how does it become politicized? These questions are examined through this groundbreaking film on the life and career of Melville J. Herskovits (1895-1963), the pioneering American anthropologist of African Studies and one of the most controversial intellectuals of the 20th century. How did this son of Jewish immigrants come to play such a decisive role in the shaping of modern African American and African identities? Herskovits emerges as an iconic figure in on-going debates in the social sciences over the ethics of representation and the right of a people to represent themselves...."

Just Black? Multi-Racial Identity
"Most of us at one time or other are faced with an official form requiring us to 'check' the applicable ethnic designation. What 'box' does a person check if his or her parents come from different racial backgrounds? In this provocative documentary, we meet several articulate young men and women of mixed racial heritage. Each has one black parent, and a white, Asian or Hispanic second parent. They share with us their struggle to establish, acquire and assert a racial identity. Their experiences lead one to question whether there is room in America for a multi-racial identity...."

The Mirror Lied
"How does a young African-American woman cope with the ideals of feminine beauty imposed by white society? This film shows the struggle of the filmmaker's fifteen-year-old sister, Jantre, to accept her appearance. Though she spends an hour each day trying to tame her unruly hair, she never feels attractive. She envies the white girls' hair. When she asks for a wig for her birthday, her mother accuses her of not accepting her blackness. Jantre's mother grew up in the segregated South and says it took many years to accept herself. In a bold move to challenge her classmates' standards, Jantre goes to school with her hair in its natural fullness. She finds it a liberating experience."

A Question of Color
"....is the first documentary to confront a painful and long taboo subject: the disturbing feelings many African Americans harbor about themselves and their appearance. African American filmmaker Kathe Sandler digs into the often subconscious world of "color consciousness," a caste system based on how closely skin color, hair texture and facial features conform to a European ideal." 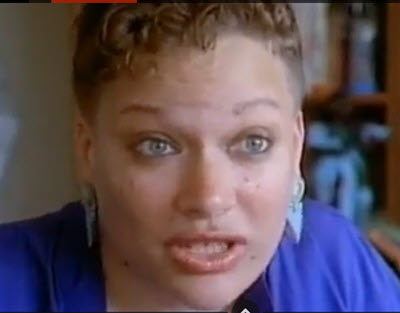 (A Question of Color)