3 1/2 Bullets, Ten Minutes
"On Black Friday 2012, four African - American teenagers stopped at a gas station to buy gum and cigarettes. One of them, Jordan Davis, argued with Michael Dunn, a white man parked beside them, over the volume of music playing in their car. The altercation turned to tragedy when Dunn fired 10 bullets at the unarmed boys, killing Davis almost instantly.,,, - "

Banished
"Between 1860 and 1920, hundreds of U.S. counties expelled their African-American residents. The pattern was horrifically similar in almost all cases: a black man was accused of assaulting a white woman, was lynched, and then white rioters attacked black neighborhoods with guns and firebombs. After blacks fled for their lives, whites illegally assumed ownership of the abandoned property...."

The Blood Is at the Doorstep
"After Dontre Hamilton, a black, unarmed man diagnosed with schizophrenia, was shot 14 times and killed by police in Milwaukee, his family embarks on a quest for answers, justice, and reform as the investigation unfolds. Filmed over the course of three years in the direct aftermath of Dontre's death, this intimate verite documentary follows his family as they channel their grief into community organizing in an attempt to reset the narrative..."

Booker's Place: A Mississippi Story
"in 1965, filmmaker Frank De Felitta filmed a documentary focused on changing times in the American South, particularly the tension-fraught Mississippi Delta. The film was broadcast on NBC News in May of 1966 and outraged many Southern viewers, in part because it included an extraordinary scene featuring a local African American waiter named Booker Wright. Wright, who worked at a local 'whites only' restaurant in Greenwood, Mississippi, went on record to deliver a stunning, heartfelt, inflammatory monologue about the realities of racism in the community. The fallout for Booker Wright was extreme. He lost his job. He was beaten and ostracized by those who considered him 'a traitor.' Booker's Place, his place of business, was torched. Forty-five years after Booker's television appearance, Frank De Felitta's son, director Raymond De Felitta, journeyed into the Mississippi Delta with Wright's granddaughter to learn more about who Wright was, the mystery surrounding his courageous life and untimely death, and the impact of the NBC News documentary"

The FBI's War on Black America
"This documentary directed by Denis Mueller and Deb Ellis is about the FBI's counterintelligence program COINTELPRO against Black political figures and organizations during the civil rights movement of the late 1960s and early 1970s. It uses interviews with participants and film clips from the period."

Freedom  Never dies: The Legacy of Harry T. Moore
"On Christmas night 1951, Harry T. Moore and his wife Harriette retired to bed in their white frame house tucked inside a small orange grove in Mims, Florida. Ten minutes later, a bomb shattered their house, their lives, and any notions that the South’s post-war transition to racial equality would be a smooth one. Harry Moore died that night, his wife nine days later."

Hate Crime
"Part one of this program shows how the New South has found some answers to an old problem: racial violence—in this case church burnings in the rural flatlands of South Carolina. Law enforcement officials arrest and jail members of the Ku Klux Klan for the church burnings, and one black church files a lawsuit against the KKK and manages to win a remarkable $38-million judgment against the Klan from a racially mixed jury. Standing up to hate and not remaining silent is vital, says Pastor Jonathan Mouzon. 'If we keep our mouths shut, it just gives [racists] more power,' he says...."

Scottsboro - An American Tragedy:
"In 1931, two white women stepped from a box car in Paint Rock, Alabama to make a shocking accusation: they had been raped by nine black teenagers on the train. So began one of the most significant legal fights of the twentieth century. The trial of the nine falsely accused teens would draw North and South into their sharpest conflict since the Civil War.."

South
"Inspired by her love of William Faulkner and James Baldwin, renowned director Chantal Akerman had planned to produce a meditation on the American South. However, just days before she was to begin filming, James Byrd, Jr. was murdered in Jasper, Texas. A black family man, Byrd has been severely beaten by three white men, chained to their truck, and dragged three miles through predominately black parts of the county......"

Trouble Behind
"...shows how present and past are tied in a fearful knot as it searches for the origins of today's racism in the past brutality of a seemingly typical American town - Corbin, Kentucky, home of Kentucky Fried Chicken. Like many industrial centers, Corbin attracted African American sharecroppers looking for better paying jobs during World War I. But when white veterans returned from the war, the found their close-knit community changed and economic competition heated up. One October night in 1919, an armed white mob rounded up 200 black railroad workers, locked them into box cars, beat many of them, and then literally railroaded them out of town..."

Unforgiven: Legacy of a Lynching
"James Cameron is the only survivor of the lynching of three black men in Indiana, 1930, prompted by the murder of a white man and rape of his girlfriend. He is now 80 years old and has founded the Black Holocaust Museum in Milwaukee to remind the world of the atrocities committed against black people in America. Ku Klux Klan members, the mayor of the town and relatives of those hanged and the murdered man recollect the night and the era." 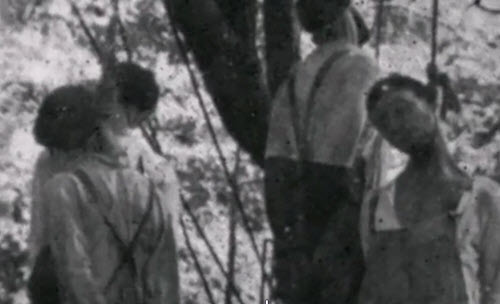