Black Soldier Blues
"When America established its Pacific supply base in Australia during World War II, Australia's Prime Minister warmly welcomed the estimated one million American servicemen and women stationed and passing through. The exception: black GIs. Because of the racist White Australia Policy the black troops were initially forbidden to be stationed on Australian shores. Between 1942 and 1945, Australia reluctantly agreed to let African American personnel enter, as long as they were separated from the rest of the population..."

For Love of Liberty, the Story of America's Black Patriots  "is a PBS documentary that details the military contributions of African Americans from the Revolutionary War to the present."

Tuskegee Airmen
"This inspiring World War II story spotlights 450 men who fought on two fronts at once. Black American aviators, known as the Tuskegee Airmen, battled Axis powers in Europe and North Africa and then took on racism at home. Trained by the segregated military system as an experiment to see if blacks could fly in combat, these pilots made more than 15,000 sorties and 1,500 missions. Their success led to the integration of the U.S. armed forces." 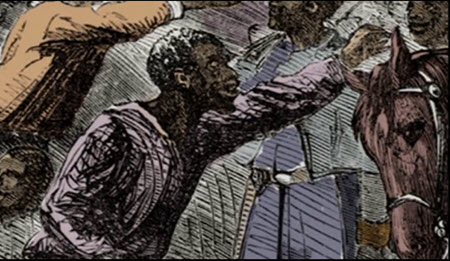 (Will the Negro Fight?)