Autumn Sonata
"This film was the only collaboration between cinema's two great Bergmans: Ingmar, the iconic director of The Seventh Seal, and Ingrid, the monumental star of Casablanca."

Cries and Whispers
"This existential wail of a drama from Ingmar Bergman concerns two sisters, Karin and Maria, keeping vigil for a third, Agnes, who is dying of cancer and can find solace only in the arms of a beatific servant."

Fanny and Alexander
"Through the eyes of ten-year-old Alexander, we witness the delights and conflicts of the Ekdahl family, a sprawling bourgeois clan in turn-of-the-twentieth-century Sweden."

Hour of the Wolf
"The strangest and most disturbing of the films Ingmar Bergman shot on the island of Faro, Hour of the Wolf stars Max von Sydow as a haunted painter living in voluntary exile with his wife (Liv Ullmann)."

Persona
"By the midsixties, Ingmar Bergman had already conjured many of the cinema's most unforgettable images. But with the radical Persona, this supreme artist attained new levels of visual poetry."

The Seventh Seal
"Disillusioned and exhausted after a decade of battling in the Crusades, a knight (Max von Sydow) encounters Death on a desolate beach and challenges him to a fateful game of chess."

Smiles of a Summer Night
"After fifteen films that received mostly local acclaim, this 1955 comedy at last ushered in an international audience for Ingmar Bergman."

The Virgin Spring
"Winner of the Academy Award for Best Foreign Language Film, Ingmar Bergman's The Virgin Spring is a harrowing tale of faith, revenge, and savagery in medieval Sweden."

Wild Strawberries
"Traveling to accept an honorary degree, Professor Isak Borg--masterfully played by veteran director Victor Sjostrom--is forced to face his past, come to terms with his faults, and make peace with the inevitability of his approaching death." 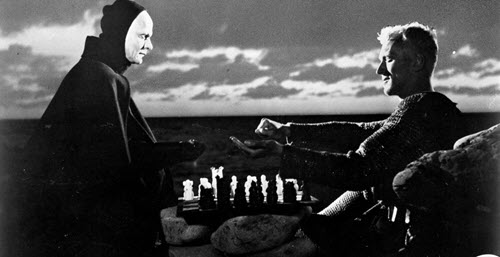 (Bengt Ekerot and Max von Sydow in The Seventh Seal)