Bellissima
"Film director Blasetti is looking for a little girl for his new movie. Along with other mothers, Maddelena takes her daugther to Cinecittà, hoping she'll be selected and become a star. She is ready to sacrifice anything for little Maria..."

Bicycle Thieves
"Hailed around the world as one of the greatest movies ever made, the Academy Award-winning Bicycle Thieves, directed by Vittorio De Sica, defined an era in cinema. In poverty-stricken postwar Rome, a man is on his first day of a new job that offers hope of salvation for his desperate family when his bicycle, which he needs for work, is stolen."

The Conformist
"In Mussolini's Italy, repressed Jean-Louis Trintignant, trying to purge memories of a youthful, homosexual episode--and murder--joins the Fascists in a desperate attempt to fit in. As the reluctant Judas motors to his personal Gethsemane (the assassination of his leftist mentor), he flashes back to a dance party for the blind; an insane asylum in a stadium..."

Juliet of the Spirits
"Cinematographer Gianni di Venanzo's masterful use of Technicolor transforms Juliet of the Spirits, Fellini's first color feature, into a kaleidoscope of dreams, spirits, and memories. Giulietta Masina plays a betrayed wife whose inability to come to terms with reality leads her along a hallucinatory journey of self-discovery..."

Rome Open City
"This was Roberto Rossellini's revelation, a harrowing drama about the Nazi occupation of Rome and the brave few who struggled against it."

La strada
"There has never been a face quite like that of Giulietta Masina. Her husband, the legendary Federico Fellini, directs her as Gelsomina in La strada, the film that launched them both to international stardom." 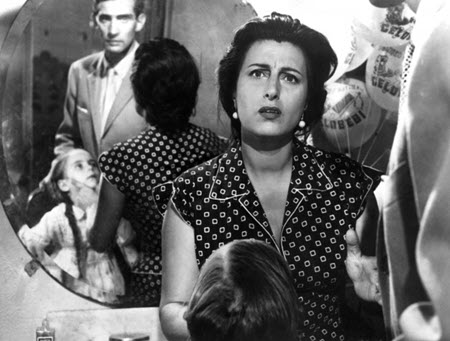