Die Hard
"Facing Christmas 3,000 miles from his estranged wife and two children, New York policeman John McClane flies to Los Angeles bearing presents and hoping to patch up his marriage. He then becomes the only hope for a small group of hostages, one of whom is his estranged wife, trapped in a Los Angeles high-rise building when it is seized by terrorists on Christmas Eve."

Ford v. Ferrari
"The remarkable true story of the visionary American car designer Carroll Shelby and the fearless British-born driver Ken Miles, who together battled corporate interference, the laws of physics, and their own personal demons to build a revolutionary race car for Ford Motor Company and take on the dominating race cars of Enzo Ferrari at the 24 Hours of Le Mans in France in 1966."

The Revenant
"Inspired by true events, The Revenant captures one man's epic adventure of survival and the extraordinary power of the human spirit. In an expedition of the uncharted American wilderness, legendary explorer Hugh Glass (Leonardo DiCaprio) is brutally attacked by a bear and left for dead by members of his own hunting team. In a quest to survive, Glass endures unimaginable grief as well as the betrayal of his confidant John Fitzgerald (Tom Hardy). Guided by sheer will and the love of his family, Glass must navigate a vicious winter in a relentless pursuit to live and find redemption." 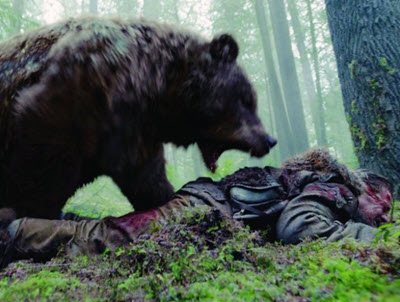